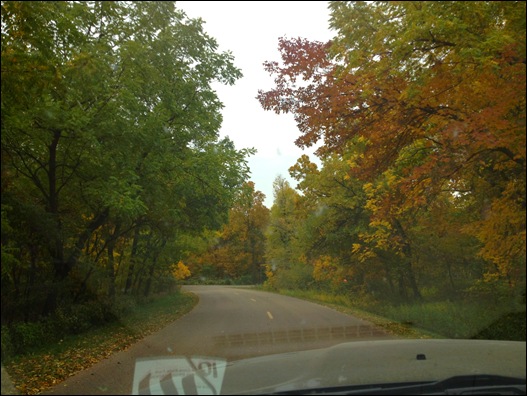 The drive down to Indian Cave for my first Competitive Trail Ride of the year was uneventful.  Driving into the wind ruined any chance of getting a few extra miles per gallon of fuel but what about traveling with horses is cheap?  When I arrived at the park, it was worth the drive and the gas.  The foliage was breathtaking.  I tried to snap some pictures as I was driving but figured I would have a better chance of getting good shots out on the trail. 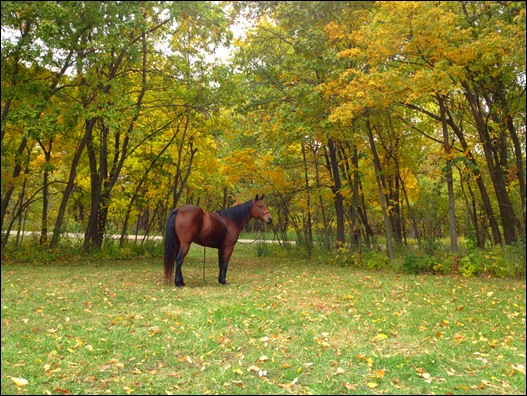 I was there early and found a place away from the busy ride camp.  I hobbled Windy and let her graze while I set up camp.  Cell service was pretty close to non-existent so to save my battery, I switched it to airplane mode.  I hoped the weather forecast changed but had my doubts.  We were there and would ride; all systems go.

My friend, Shari, pulled in a couple hours after I did.  We checked our horses in, attended the ride briefing and got our maps.  The first day would be 17 miles which was a little less than I remembered when I rode this ride before, but given the possibility of wet trails, I was relieved.  Since at a NATRC sanctioned CTR, all horses must be stabled in like conditions (tied to the trailer), it is up to the horsemanship judge if riders can put their horses in the trailer should a severe storm move in.  Both the horsemanship judge and vet judge agreed that riders could move their horses in to the trailer for their safety if needed.  I wasn’t worried about rain, but hail and severe lightning always makes me nervous so was glad we had that option.

It was really chilly by bedtime.  I brought what I remembered as being a waterproof blanket for Windy but then started questioning myself as to whether that was the right one.  Worried that it would storm and she would be saturated, I borrowed a “for sure” waterproof blanket from Shari and it fit Windy perfectly.  I know the one I brought is waterproof – funny how you can second guess yourself.  I put out a feeding pan between our two trailers so I could see how much rain, if any, we would get overnight.  It started raining shortly after I went to bed.

Laying in a trailer, you hear every drop.  It stormed early and then again around midnight and the last one rolled through probably around 5 AM.  Although there was some lightning and thunder, it didn’t sound like a fierce storm and Windy I did not move Windy inside.  Frustrated once again for not having a cell signal to see the radar, I was anxious to see how much rain my pan captured.  The temperatures really rose overnight and it was a lot warmer when I got up than when I went to bed.  I swore it rained 6” and was pleased to find only 1” in my pan.  I was hopeful being it was so dry prior to that night that the rain just washed off the trails and all would be fine.  Wishful thinking.    (To be continued….)