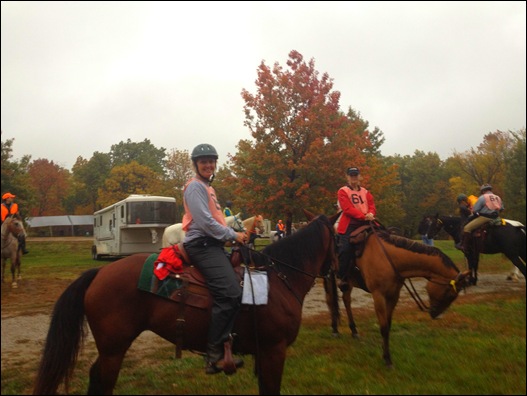 The night before, I had laid out fleece lined breeches and long underwear as well my rain gear.  But with the warmer air, I nixed the long johns and fleece for just some riding and rain pants.  I had a vest over a long sleeve tee shirt and tied my son’s waterproof track coat to the back of my saddle.  I felt Windy’s excitement when I mounted up and was surprised as she had been almost docile since we arrived.  But once we got to the started point, she had mellowed and stood nicely as we waited to clock out.

I was third in our group of four and about 100 feet into the ride and realized this spot was NOT going to work.  Windy took off from the starting point and in her opinion, the race was on.  It is said you should see the bottom of the hooves of the horse in front of you through the ears of your own horse.  With the sloppy wet downhill trails, every time I would try to rate her, she would slip.  She was way too close to the horse in front of her and her frustration was mounting.  I realized in those first few moments I should have put on gloves and not because my hands were cold.

I figured once we got to the first clearing, I would move to the front.  But before I could even think of jockeying for a new position, we were stopped for an obstacle.  Really?  Already?    It was the simplest of challenges:  straddle a log and count to five and move along.  To get Windy to stop for the riders in front of me required me pulling her off the trail; I sincerely doubted she would find the need to perform at this point.  When it was our turn, as predicted she stepped over the log and ignored my request to halt.  I circled her and brought her back.  Having her turned away from the other horses, she quieted enough for me to count to five, turn and continue on our way.

Getting out in front only solved the problem for a few minutes.  Before long a group of safety riders passed us and then Windy’s goal was to catch up with them.  Someone forgot to tell my mare this was not a race!  Once, in my effort to slow her, I went for the one-rein stop.  She stepped up off the trail and then back into it, slipped and fell on her hip.  Did I mention 1” of rain may as well have been 6”; the trails were a sloppy mess.  Jesus got a middle initial in his name at that point.  I warned the girls who were riding with us that my language probably wouldn’t be improving as the day wore on. 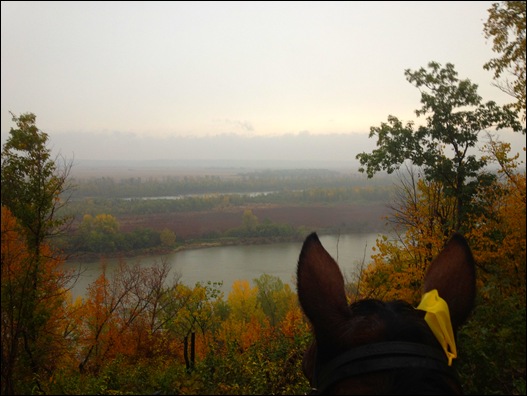 In an effort to adjust for the trail conditions, the map was adjusted and 3 miles were deleted from the route.  We found ourselves high above the Missouri River a little earlier than we had envisioned.  Windy continued to give 150% pulling those hills.  Her footing was rather remarkable but I just simply had no control and I wanted it back.  When we would stop at the top to let them blow, she wanted nothing of it and would work herself up even more. 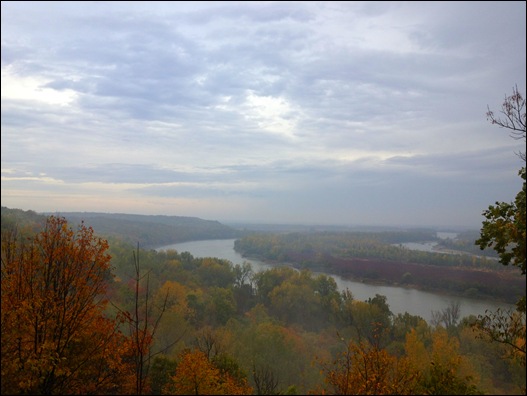 In a rare moment of pause, I managed to take a few pictures just because it was so beautiful and if I couldn’t have done it from the saddle, I would have dismounted for these shots.  This is what made the ride worth all the struggles.

We were pretty sure the Pulse & Respiration crew would be at the bottom of this bluff.  Had we followed the original mapping, it would be the end of about 6 miles.  Instead, we had only rode a little over 3 miles but knowing the trail system, there wasn’t a lot of opportunity for staging the P & R’s so we were not surprised to find it as suspected.

When I dismounted, Windy immediately started to aggressively rub on me.  I stepped away from her and reached to scratch around her bridle but she stepped into me and started rubbing again.  I took the reins and backed her away from me.  Seriously, I couldn’t get her to hold still enough for me to unclip them from the bit to hook into the halter.  I didn’t want to disturb the other riders but she was seriously quite obtuse.  I tried giving her a carrot.  She gobbled it down like a starving coyote and once again started at me.  I held up the reins in front of her face to yield her away and she kept her distance but was very agitated.  The volunteer had just reached us and was listening to her heartbeat in a stethoscope.  She looked at me and said, “I never heard anything like this before….”   (To be continued)