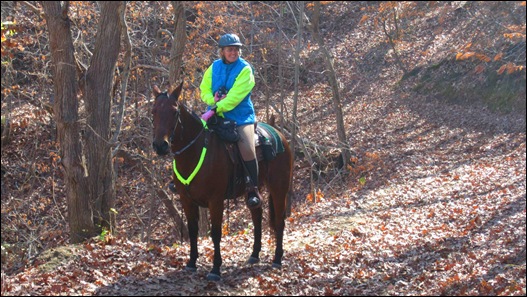 I remember when my kids were little and they would be playing in the park.  When I would say it was time to go, they would run away from me, saying they have to go down the slippery slide one more time or push each other around in the merry go-round one more time.   They got more play in those last 3 minutes knowing it was time to go than they did the hour they were there.  That’s how I feel about riding right now.  Just when I think we’ve seen the last of the good weather, we are given just one more day and I grasp at it like a child at play. 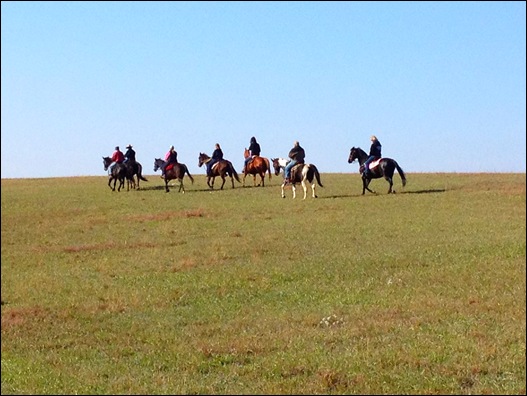 John and I had a nice ride with the Platte River Riders the last weekend of October at the Spring Creek Prairie Audubon Center.  Open to horses by invitation only, our host, Trudy, guided us through the prairie and provided a nice history lesson of the grounds.  The tall grass prairies have never been plowed and there are still ruts from the wagon trains of long ago.  The sun was shining and weather reports indicated it would continue for at least another week.  That got me desperate for just one more weekend of riding. 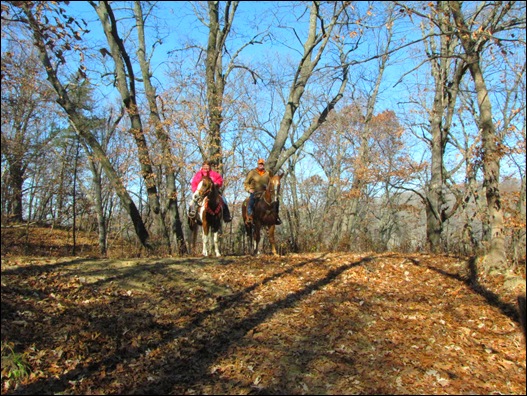 I have been very fortunate to have ridden at most of my favorite places this past season and quite a few new ones.  But it has been years since I crossed the river to ride Iowa’s Waubonsie State Park.  And about an hour or so down the road from there is Missouri’s Honey Creek Conservation Area which has also been on my “to do” list.  The weather this past weekend just might afford us one more ride and John was game for a weekend trip.  Our friends, Kathy and Rich joined us for this little late season adventure. 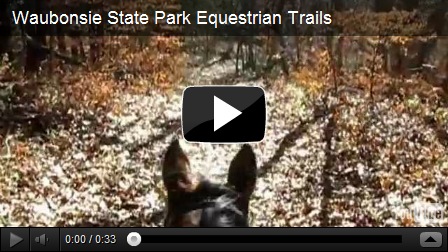 Most of the trees along the trails had lost their leaves.  I loved the sound of the horses hooves as they moved through the dry foliage which offered a different kind of beauty to the trails.  I had forgotten how steep the climbs were at Waubonsie, thankful that our horses are used often and well conditioned.  Most of the trails are good climbs; there is not a lot of flat riding. 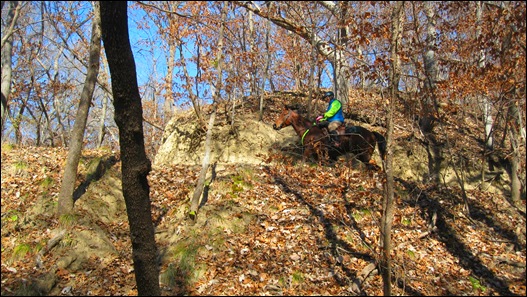 We were surprised to find that even after dark, we weren’t terribly chilly.  We warmed up soup and had a great dinner and then shared what could be the last campfire of 2012.  We plugged into Rich’s generator to take the chill out of the trailer and had our propane heater ready for when we woke up.  We stayed comfortable all night. 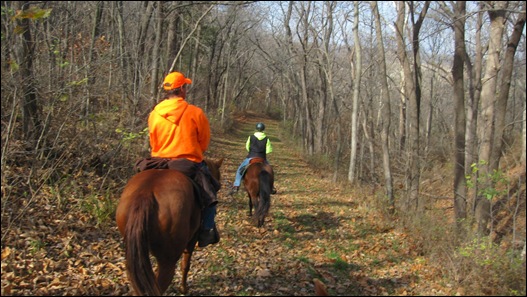 After breakfast at a local truckstop, we drove on to our next destination.  With the time change (which I dread and hate), we were on the Honey Creek trails by 10:30 AM.  The park had warned me that although horses were still allowed on the trail through the weekend, hunting season for youth’s was also allowed.  I bought us hunter orange and safety green sweatshirts.  I also bought a safety green sweatshirt and made slips for the horse’s breast collars.  We would be seen for miles. 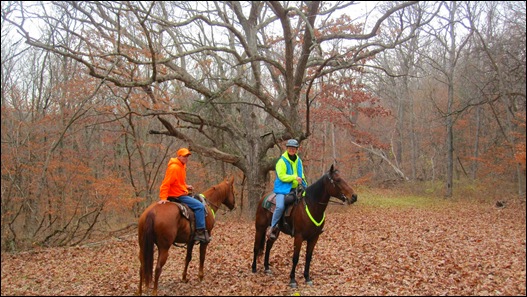 I had printed trail maps before I left but somehow managed to forget them.  So the first hour or so was hit and miss but eventually we found the rhythm of the trails.  They were not as severe as Waubonsie and had some really cool looking trees.  Located right off the interstate, you could hear the road noise, but I imagine in the warmer months it would be muffled by the tree leaves. 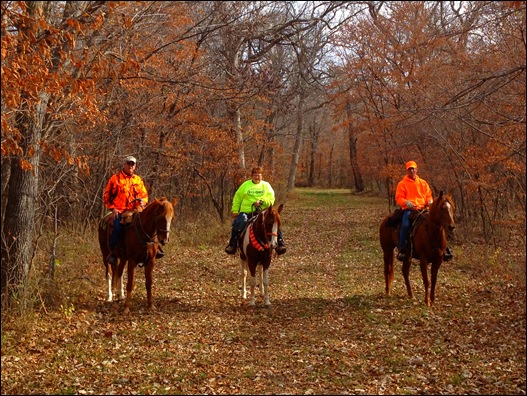 We had two days of great fall riding with friends.  By the end of this week, temperatures are to be in the 70’s!  Again, a rare gift.  Maybe I will get just one more weekend of riding.

(Thanks, Kathy, for getting some pictures of John & Fancy and Windy & me.)