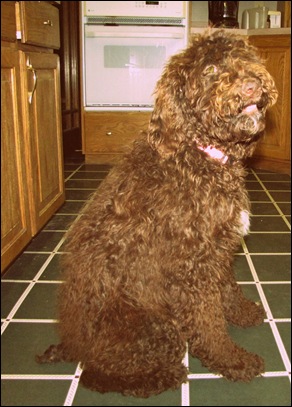 Pip (or perhaps Pippin) is her name today.  It’s Day Three and she has had three names so far.  Well, four actually, if you consider the name she came with which was not an option!  (FiFi.  Really!)  Initially she was to be Greta.  I loved that name for a dog.  But it was vetoed by Case.  Even my sister weighed in with a thumbs down.  Darby was my second choice but admittedly, it wasn’t rolling off my tongue very easy.  Might have to save that for a horse.  Case started calling her “Pip” last night and you know?  I like it.  So for today, Pip it is. 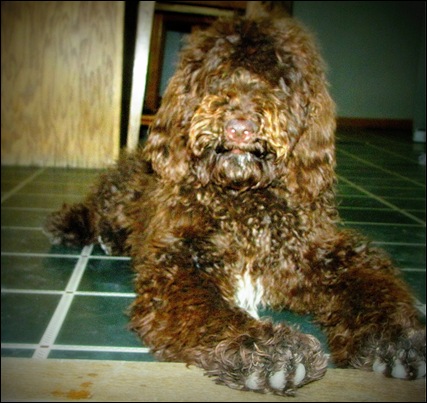 Who is Pip?  The new pup!  You had to have known I couldn’t go long without one.  A one-hundred and fifty pound St. Bernard is just not enough to fill this big house, so I’ve been puppy shopping.

While I would have loved to have gotten another white shepherd, it wouldn’t have been Ritz.  And as much as I loved that dog, the shepHERD part was not necessarily good around horses.  While he was the best riding buddy in the world, he also felt it was his job to "herd” occasionally and when he got into that funk, there was no stopping him.  I decided long before I lost Ritz that I wouldn’t have another herding dog.  I know they can be taught but I’m not that good of teacher.

If you would have asked me six months ago if I were ever interested in a poodle, I would have laughed in your face.  Foofoo dogs are not for me; people would make fun!  Since I already have a big lug like Bo, I need a sport dog – one that has endurance, is obedient and smart.  Really, a poodle?  And then I met a Standard Poodle in his standard dress – a farm coat – not a fancy haircut and I couldn’t believe I was seeing the same dog.  Upon further research, I found they were bred to hunt, they are smart and they have endurance.  I’m told a Standard Poodle could easily keep up with my horse on our long rides.    I filed that away as a possibility not thinking I would be looking for a new dog this soon.  But such is life.

I was quite smitten with Labradoodles as well, for the same reason as the poodle and maybe people wouldn’t laugh at me as much if there was a little lab mixed in.    After Ritz died, I started perusing the puppy ads.  Ouch!  A little bit of sticker shock at the price of poodles and even more so for a labradoodle!  Gosh, they cost as much as a horse!  And even if I could somehow justify spending that on a dog, John would be flabbergasted!

Just so you know, I didn’t necessarily need a puppy nor a registered, full blooded hound.  I also kept a close eye on the rescue pages.  Again, I wanted a dog that was not only obedient and loyal, but good around horses and people and could go the miles.  The dog I was getting had a purpose.  I would not rule out a rescue dog provided it fit my needs.  My application at a semi-local rescue was approved and my friend who volunteers there was on the look-out for me should something come in that she thought would work for me.

It did.  Not to the rescue, per se, but through an obedience trainer this same person knew.  The trainer knew a gal who was needing to rehome one of two Standard Poodle puppies.  She has children, moved in with her parents and had at least one puppy too many.  Did my friend know of anyone who would take one or foster her?  Was that a coincidence or what? 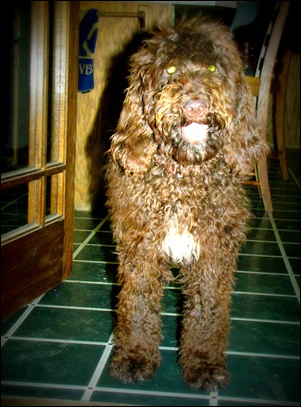 The pup in question was a registered 5 month old chocolate Standard Poodle.  She was spayed, up-to-date on shots and micro-chipped.  She was not a house dog so would need house training but was free to a good home.  That’s about all I knew.  What I figured was the girl was keeping the good pup and rehoming the naughty one.

We picked her up on Sunday.