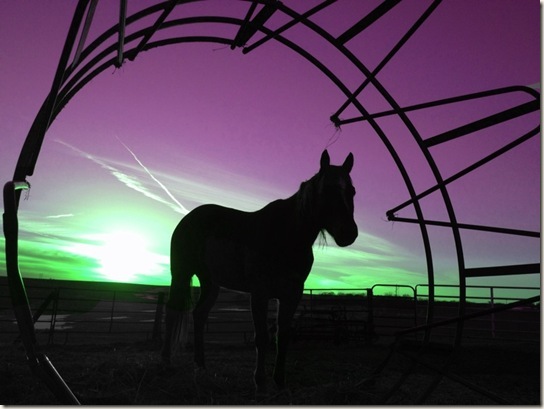 February 2.  Groundhog day.  One of my favorite holidays because it doesn’t require a special dinner, partying till the sun comes up or buying a gift.  And it’s outcome doesn’t change a thing, really.

I’m not counting the days until spring as much as I am counting the bales of hay.  If we get enough moisture this spring so our pasture grass comes in lush, we will have enough.  If the drought continues (as it seems it is), we will need more hay.  Right now it is going for around $120 – $150 per round bale.  When it’s cold, our horses seem to go through one about every week.  To say I’m nervous about it is an understatement. 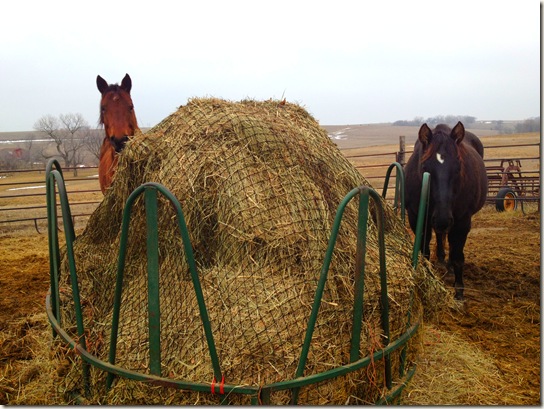 In an effort to conserve the hay and avoid waste, I bought a net*.  The horses have to work a little harder to get their hay and there is a lot less waste.   It has taken some practice getting it on right and securing it but this last time seems to have worked okay.  I did put some holes in it when I hooked it to the feeder, but just “sewed” it up with twine.  We are on day 9 of the bale today; hope to get another 2 days out of it.  (If interested, info on the haynet at the bottom of this post.) 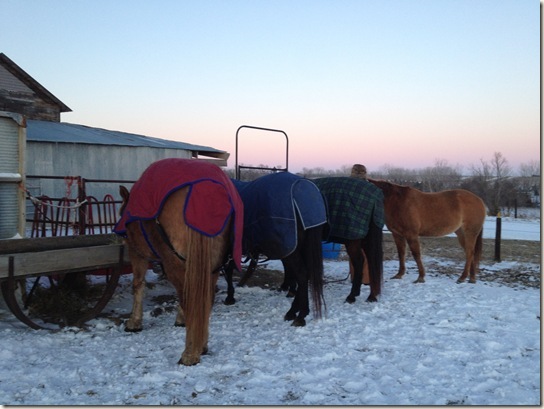 Earlier this week, the temps dipped down to single digits with high winds resulting in wind chills at –10 to –15 degrees.   John helped me blanket the herd the other night.  Ninety-nine percent of the horses in Nebraska survive the winter without being blanketed, but it makes me feel better when they are.  It’s still hovering around freezing right now, but the sun is now out so I’ll go out and undress them this afternoon. 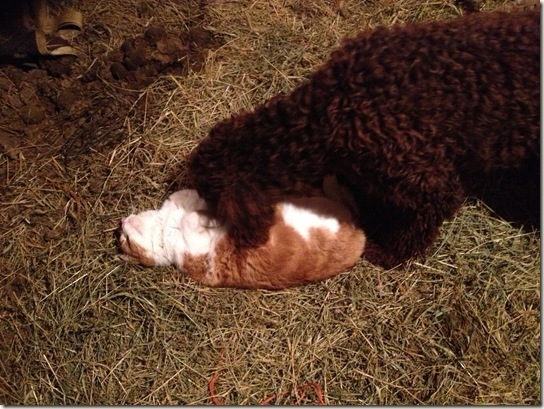 Pip loves the barn cats.  Tom, who has always cuddled up to our springer, Maddie, when she was alive, has allowed the pup the same liberties.  He will roll in the barn and she will pounce at him.  It was hard to catch a picture that was not blurry; Pip does not hold still for long, but you get the idea. 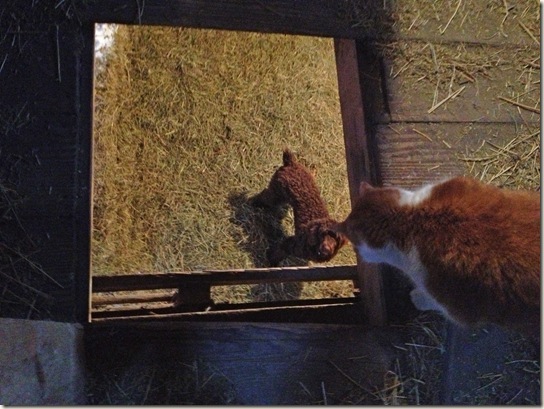 When Tom has enough, he climbs back into the hayloft.  He is such a tease!  I love being out in the barn with the horses and the other animals.  Just wish it weren’t so blasted cold right now!

Entries for The Distance Derby 2013 are now closed.  There are 129 riders this year, including the editor and a writer for TrailBLAZER magazine.  I am thrilled that they are publishing my story of the Distance Derby 2012 in their March issue.  Last year at this time, I had already logged over 90 miles.  This year, I have barely 35 miles.  Once we get through February – our coldest month – I’ll be more motivated.  In the meantime, I am filling the calendar with riding plans.  For the record, I have filled John in, too, even though he’ll claim he knew nothing when the time comes.  I’m also working on the Platte River Riders schedule.  I’ve asked the other chapter managers to fill in their rides and I’ll publish what I have next week. 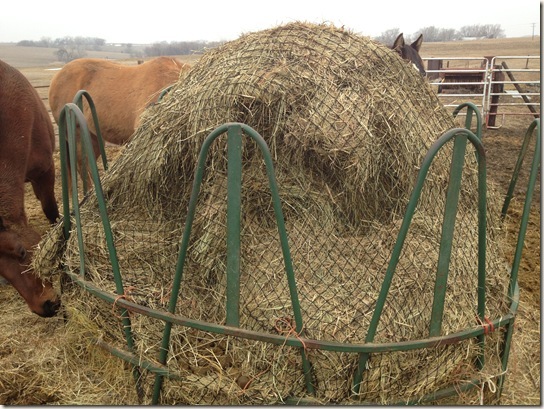 *I bought the haynet from Gourock.com as did several others folks I know.  I ordered 15x15 and it seems to work okay for my round bales.  It was $68 + $12 shipping.  If you are interested, here is a direct link.  It is tricky to get it completely covered but with practice, it gets easier.  We netted it this last time while on the bale fork and then used different ties (bungee cords, twine) to tie it to the feeder.