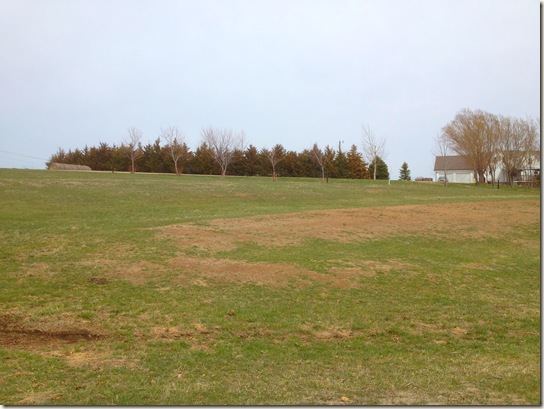 The snow has melted.  We are having a nice rain shower at the moment.  Over the last week, we got just shy of 2” of moisture which has been a God-send.  We over-seeded some of the pasture so hoping it will take.  If not, we will have to come up with a Plan B as there are so many dead spots from the drought. 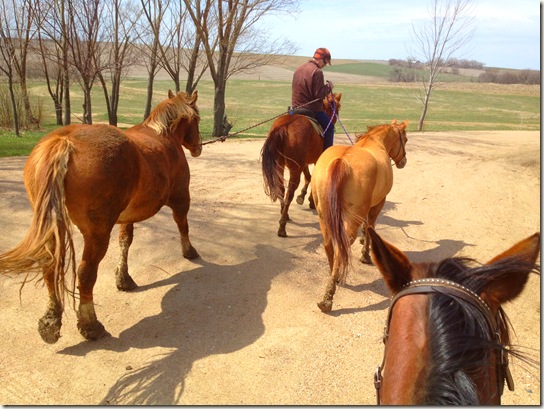 There is a small grazing area just north of my mother-in-law’s house, just down the hill from us.  We fenced it in a few years ago and would use it occasionally when we had the cows.  The horses weren’t on it last year so it came back pretty good this spring.  After church today, we went down and did the necessary repairs to the fence and then put the horses out on it for the afternoon.  John ponied Baby and Butter from Fancy.  They must have known they were going someplace good as they behaved themselves.  I ponied Blue from Windy. 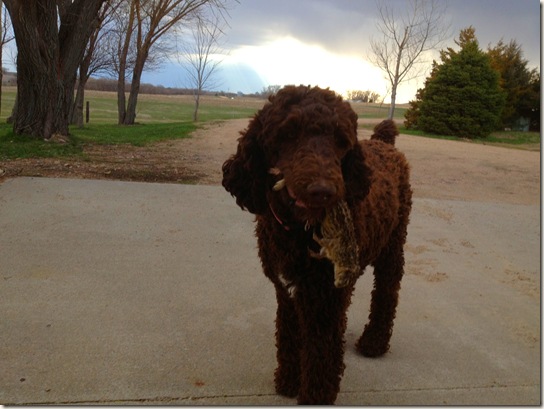 Pip has become quite the hunter.  Earlier today, I saw her in the pasture digging at a gopher hole.  Then later, she and Bo were sprinting after a rabbit.  Well, Pip was sprinting – let’s just say Bo was “in pursuit.”  Later Pip came bouncing up to me with the rabbit in her mouth.  Then this afternoon she brought me a gopher.   She sure is a busy girl.

Last night we had dinner at a friend’s home.  We got there around 6:00, I had a cocktail, John had a couple beers and we had a nice dinner.  Afterwards, we all shared a pot of coffee; us girls may or may not have laced it with Bailey’s.  It was a late night for us (10:00!) when we left and John mentioned he had forgotten he had a headlight out.  Oh, great!  We only have a fleet of vehicles to choose from – why did we take this car?

When we got to the 3-way stop outside of town, John stopped and then proceeded to go.  I was looking at my iPhone and not really paying attention when he mentioned a sheriff was at the other stop sign and John failed to turn on his blinker.  I told to him for goodness sake, “do not speed!”  After about a mile, the sheriff turned on his lights to pull him over.

He came to the window and asked John if he knew why he was pulling him over.  John was digging through his billfold and glove box for insurance card and went mute at that point.  So I jumped in and cheerfully said, “Blinker, running a stop sign, speeding or all of the above?”  The sheriff laughed and said something like that….  He asked if John had been drinking and John stuttered around saying he had two around 6:00.  The sheriff asked him to get out of the car. 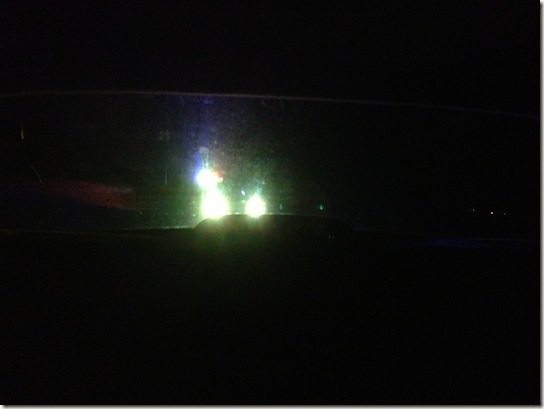 I wasn’t worried; I knew he didn’t have any Bailey’s and we didn’t drink with dinner.  But still – that high school “oh-my-gosh-the-cop-has-stopped-us” feeling came out.  And if its not bad enough we have 2 teenaged boys on our insurance, a ticket for anything would not be cool!  He got back in the car with a warning for the blinker and a fix-it ticket for the headlight.  He said he did have him do a breath test and it didn’t register anything.  Boy, I’m so glad we are all grown up!

Then… THEN…  one mile from our house, we met a State Trooper!  Boom!  He flips around and turns on his lights.  John pulls over AGAIN!  When the Trooper approached the car, John asked if he was pulling him over for the headlight and showed him the fix-it ticket.  He motioned that our house was just up the hill and the trooper let us proceed.  I tell you, I have passed more cops speeding and have not been pulled over.  Take note folks:  have a headlight out and suddenly you are quite a target! 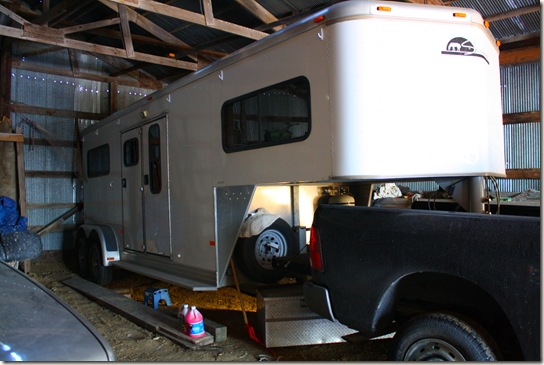 I spent the afternoon packing hay and dinking around in my trailer.  Next weekend I am driving out to meet friends for our annual spring get-together – weather be damned! 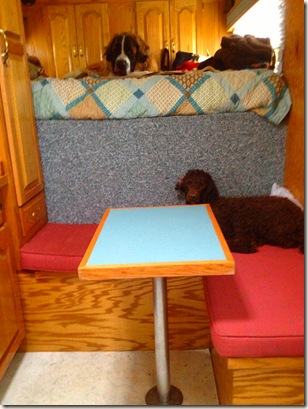 My trailer has a very small weekender package.  It’s perfect for me; gets a little tight when John and I are both camping, but it works.  However, to save space, I very seldom set up the table.   But when I get up in the morning and have coffee, I miss not having a place for my laptop or coffee cup.  I usually end up pulling the trash can over for my cup on and have my laptop on my lap. 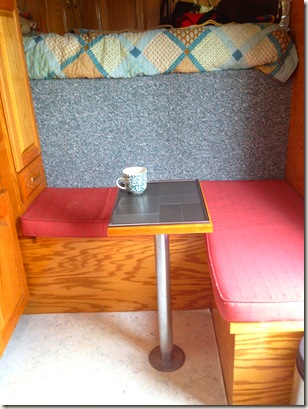 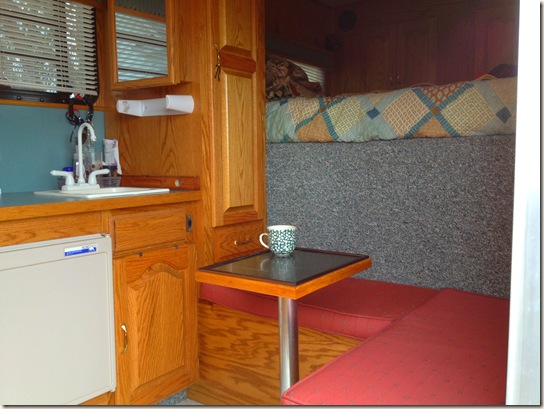 On a recent trip to Menard’s, I found what I thought would work for a new table about half the size.  John prepared a piece of wood and I affixed some stainless steel adhesive subway tiles for the table top.  We found a fixture to fit the existing table leg and just swapped it out.  I kept the bigger one in case we would want to play cards or eat inside, but I think this smaller one works much better. 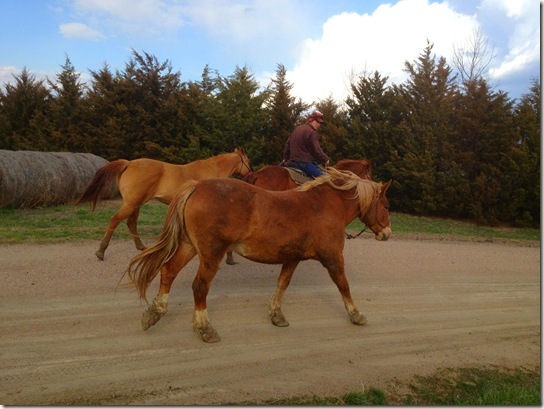 Careful not to leave the horses out on new grass very long, we went back to fetch them later this afternoon.  We’d left the tack down by the gate; tossed it back on and made the trek back home.  The sky was beginning to cloud over.  There were a couple big thunder boomers and then it started to rain.