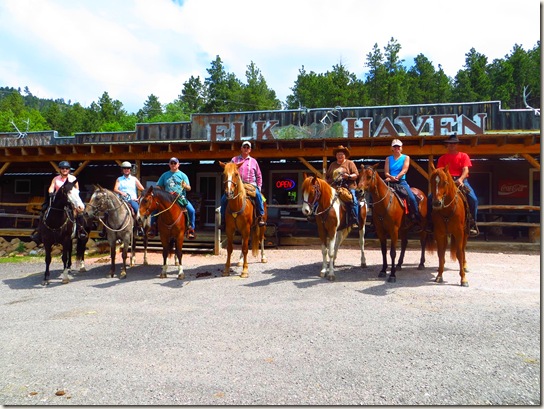 During the first part of our visit to South Dakota, we stayed at Elk Haven Horse Camp.  Located in the Black Hills near Keystone and snuggled up next to Custer State Park, the all horse camp provided just about everything you need when traveling with your horses. 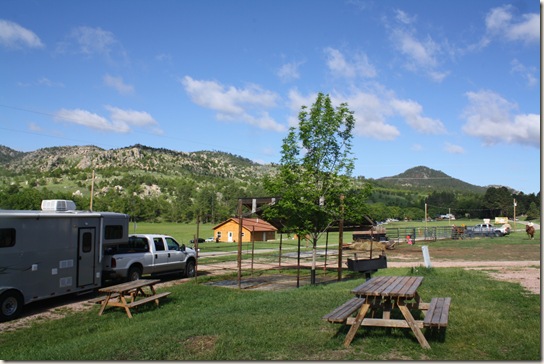 Elk Haven is a full service horse camp offering sites with electrical hook-up, water and some sewer.  Each campsite offers a fire ring, picnic table and pen for your horses.  Our mares stayed together but if you have horses that cannot be stabled together, a divider is provided to make the pen into two stalls.  Some of the pens are covered and some of the sites are shaded.  We planned to spend more time on the trail than in camp so by sunset, we had plenty of shade. 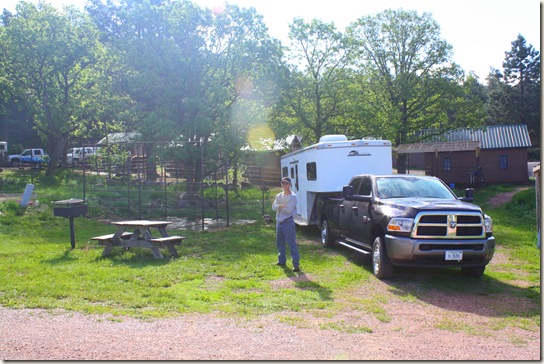 Elk Haven also offers small cabins with pens for those who do not have living quarter trailers.  You can see a glimpse of them behind our truck in the above picture. 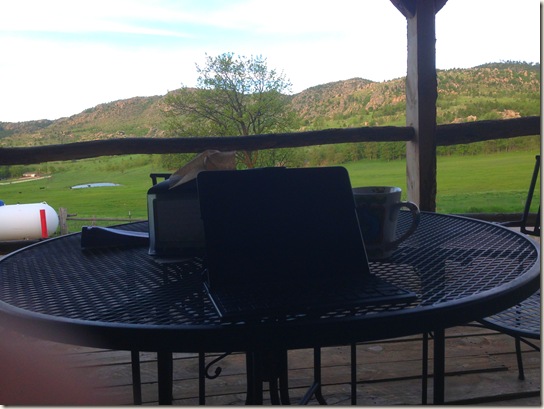 Conveniently located next to the the campground is the general store which serves breakfast, lunch and dinner – and has wifi!  I spent my mornings up there on the veranda.  The bathrooms and showers are open 24 hours.  Owners, Jim and Sheri Smith, have done a nice job by providing a welcoming and horse friendly atmosphere. 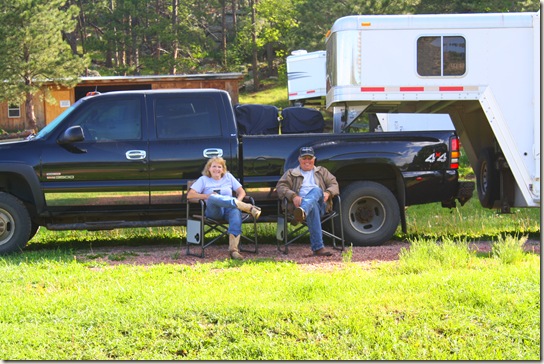 We chose Elk Haven because of its proximity to the trails to Harney Peak and Mount Rushmore, since we would have to trailer out to both.  With that said, you can ride to both destinations from Elk Haven, but round trip, it would be a long day and close to double the miles.  Jim also has a stock trailer you can rent if you prefer not to break camp.  We trailered to the Iron Creek Horse Camp trail head to access Norbeck Trail and Centennial #89 respectively to those locations.  We rode toward Harney Peak on Monday and Mt. Rushmore on Wednesday,  so on the day between, we planned an easier ride to give the horses some downtime.  We were anxious to explore the trails around Elk Haven. 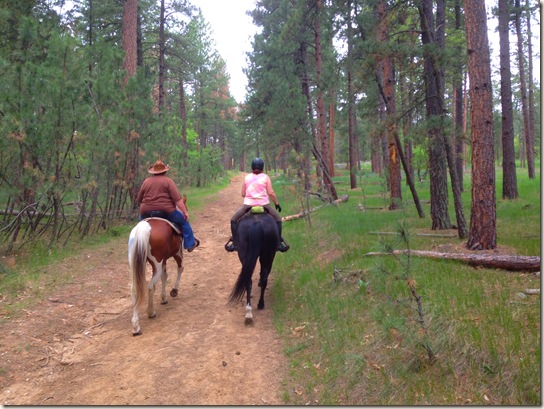 Jim had told us there were trails out of their campground.  We could go to Custer State Park or Lakota Lake or just explore the Black Hills.  We wanted to take just a couple hour ride so we decided to go toward Lakota Lake.  We headed out the back of the campground and turned to the left.  If I could tell you what direction, I would, but every time we are in the Black Hills, my sense of direction fails me. 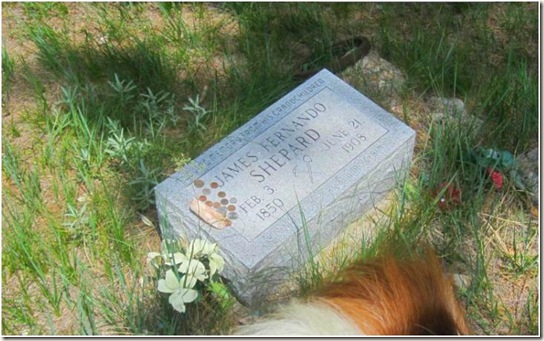 The trails were easy with little rock and in the trees.  While looking off to the left, someone noticed a grave.  We rode over to take a look.  Although it was a modern headstone, it was placed in memory of James Fernando Shepard who died in 1905.  The inscription says the stone was placed in his memory by his grandchildren and that he was murdered over a mining claim.  Interesting. 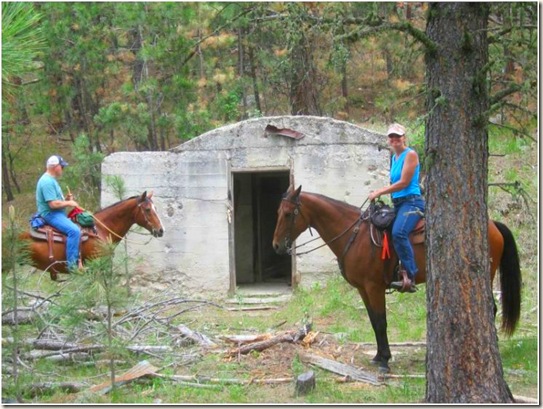 We rode on and found an entrance to a mine.  No one was too anxious to go inside and check it out.  We peeked in from our saddles. 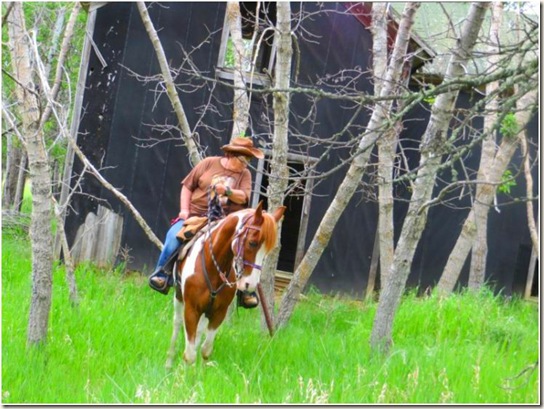 And down yonder from the entrance, some old buildings, the one above was missing siding and a door.  Kathy is checking out the aspens trees or maybe they were birch.  We learned the difference but I don’t remember now. 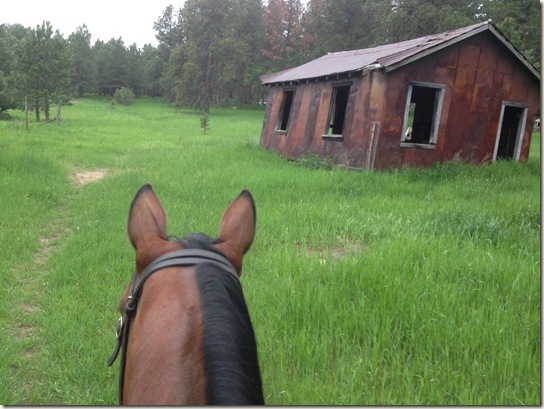 We learned later that this was the mining town of Spokane and it was noted on the map.  When I returned home, I googled to find more information.  Evidently it was a silver mine around 1890 and there were a lot of references to it being an old “ghost town”. 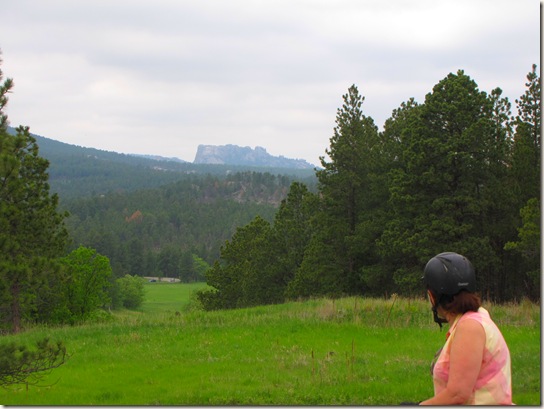 We then came to a clearing with a beautiful view of the Black Hills.  As I was trying to get the group together for a picture, John said "That's Mount Rushmore."  Huh?  John and I only wear glasses for distance and neither of us had them on.  How could he see what was on the rock over our heads? 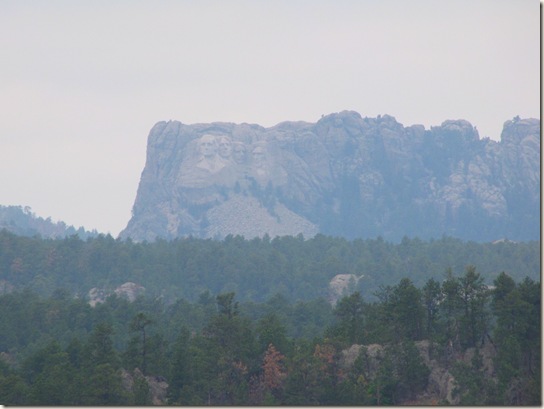 I didn't have my SLR camera so no zoom lens, so I took a picture of it with my other camera and blew up the display.  Sure enough, it was Mount Rushmore!  Who knew? 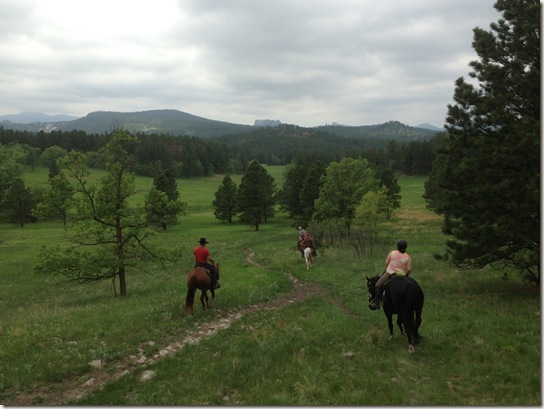 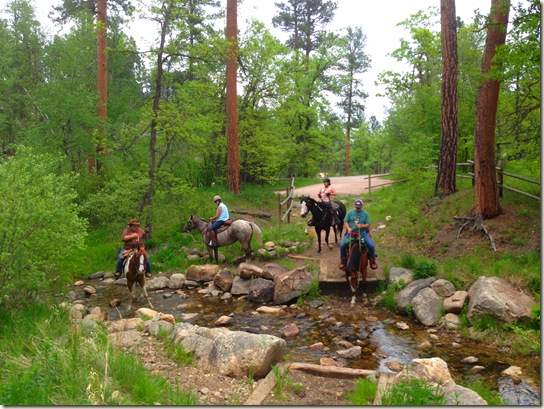 Oh, my!  What a surprise!  This little unmentioned trail was simply beautiful.  Kathy called it the "enchanted trail" while I said it was the "Garden of Eden!"  It was so green and pretty and fresh. 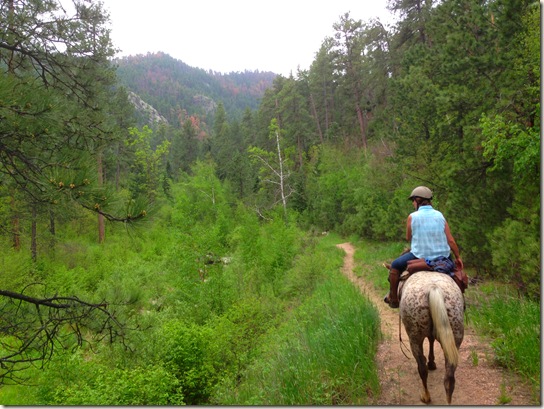 The trail followed a "bubbling brook" and provided many creek crossings.  Each crossing was constructed so that the horse stepped down into it from "stairs" rather than down the side.  We'd linger while they drank. 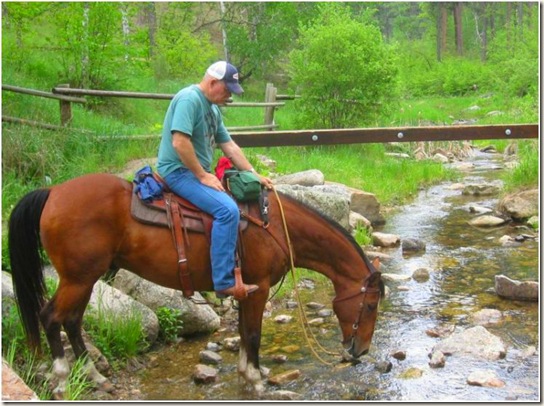 On our left side was a mountain.  We looked for wildlife but saw none.  It was so quiet along this ride; other than our oohs and awes, we were all left to our own thoughts, mostly absorbed by the beauty. 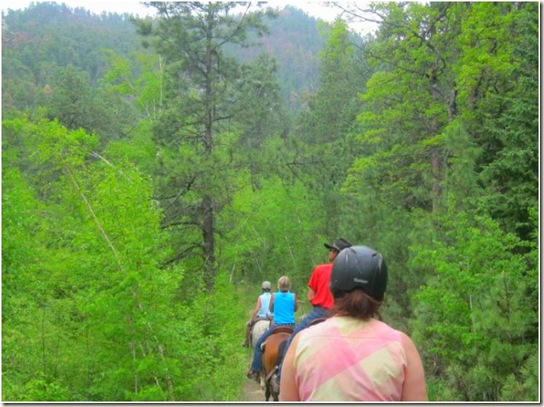 After several miles, John mentioned that we still hadn't come to a lake and we had been out for almost two hours.  I looked at my GPS and found we were heading away from the lake, not toward it.  At the Y, we should have went right, not left.  No regrets; we wouldn't have found this lovely trail if we had went the right way to begin with. 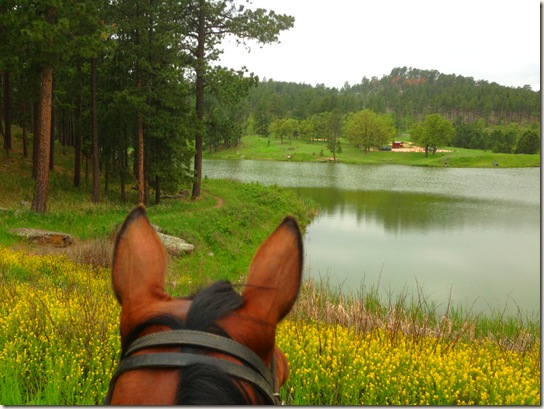 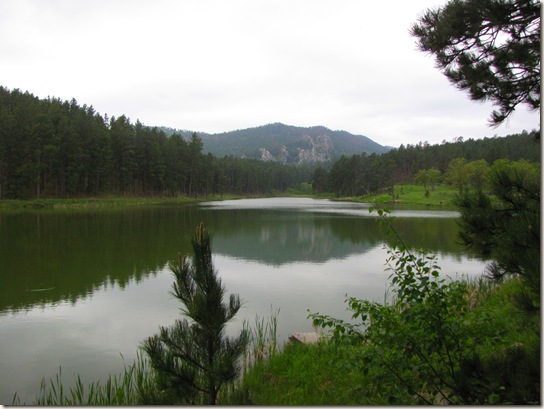 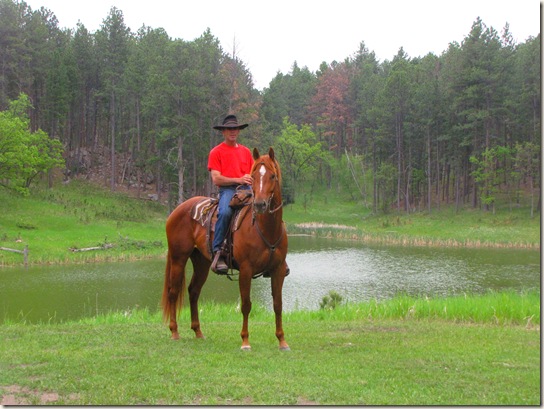 We turned and made our way back to Lakota Lake.  It was a small lake, easy to ride around.  Once again, offered some pretty views from each side. 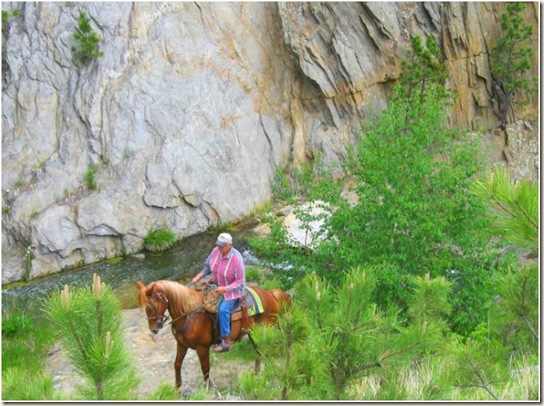 There was a sheer rock wall on one end of the lake.  Water rushed behind it and down a stream, over a little waterfall. 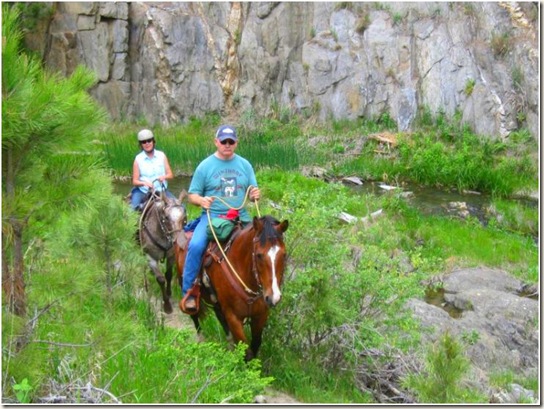 After circling the lake, we followed the same trail back.  We all regretted we did not have more time at Elk Haven to explore their other trails.  We were sure they must offer the same surprises.  Next time we would like to dip down to Custer State Park or go deeper into the Black Hills behind Elk Haven.  There are lots of possibilities!

When we returned, I mentioned to Jim that I should write his travel brochures.  He said I was more than welcome to give it a shot.  So here is the first excerpt.  I need to come back again to continue the story.