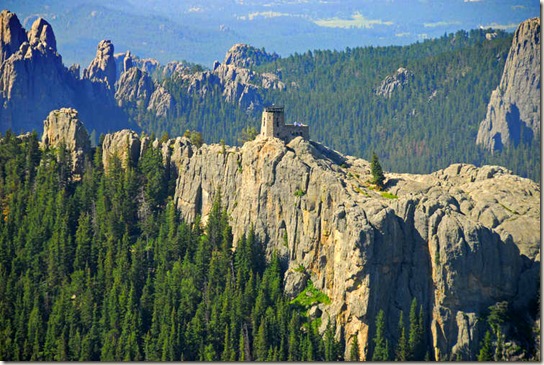 Harney Peak. It’s elevation at 7,244 feet is the highest point east of the Rockies.    Taken from an internet site, “The historic fire lookout tower built upon the remote summit remains as an abandoned shell and is open to the public. Built by the Civilian Conservation Corps in the mid-1930’s, photos of the structure show the native stone that was manually hauled the three miles to the summit.”

We could see it from where we were riding from but getting there was the problem. 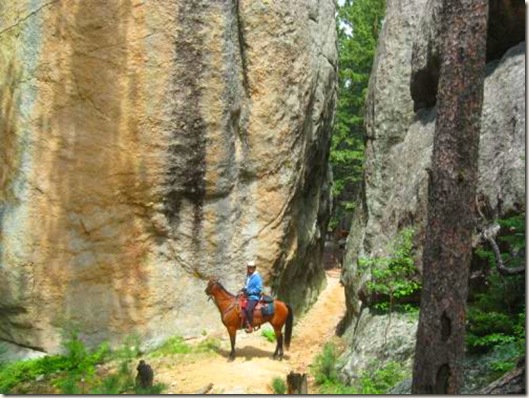 Five years ago we rode to Harney Peak from the Willow Creek trail head near Palmer Gulch & the Mt. Rushmore KOA.  It was and still is the most awesome trail I had ever rode.  Not because it was difficult - it was at times - but because it was beautiful. We crossed creeks, we picnicked in caverns and we had “to-die-for” views from the mountaintop.  I couldn't wait to share that with Jules, Steve and Robyn like Kathy and Rich shared it with us. 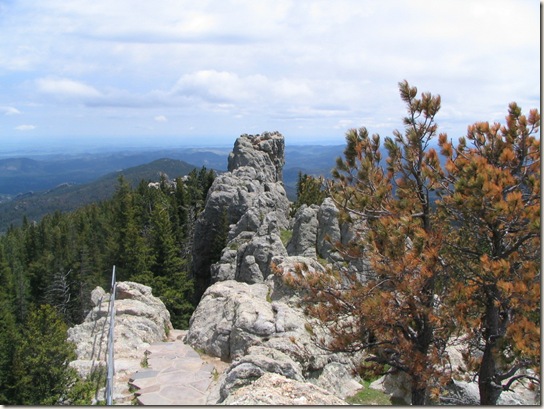 A few weeks ago, I was emailing a local CTR gal and she didn't think the Willow Creek trail head would be open all the way to Harney Peak this early in the season. Like Wyoming, the beetle bugs have infested the trees and there are tons of tree fall on the trails and not enough manpower to clean them up. We decided to wait until we got to South Dakota to get a read on what is open and what is not.  There is more than one way up that mountain.

We found out some of our fellow campers made it to Harney the day before we arrived using the Norbeck Trail from the Iron Creek Horse Camp.  They confirmed there was a lot of tree fall.  They said they cleared what they could and went around the rest; making it up there and back in about 6 hours.  We were hopeful since it sounded like it had been cleared and since none of us had been on the Norbeck Trail, it would be new to all of us. 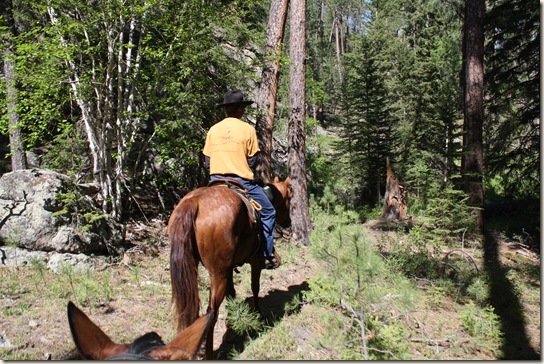 We left for the trailhead at 9 this morning. I was disappointed that by the time we got there it was already nearly 80 degrees and humid. What the heck?  Combine that with hot flashes; I was terribly miserable before we even got on the horse.  Since my hot flashes are primarily around my neck and up the back of my head, my helmet didn’t even last five minutes.  Heck, my hair was even too hot!  I was thankful to find a tank top in the trailer. 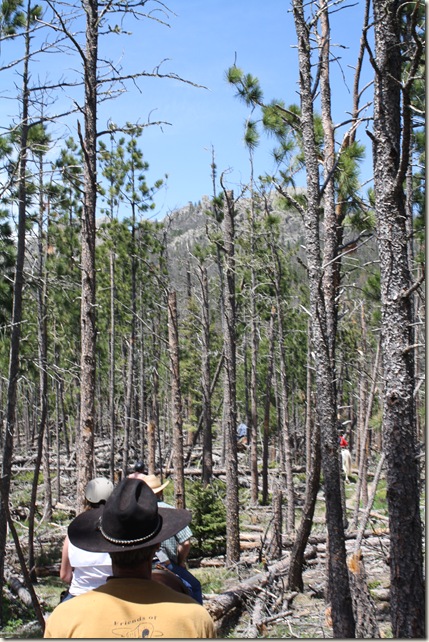 The first mile or so was okay but the more we climbed, the more there was downed timber. We would have to step over our pick our way around it. The trail grew more rocky and the only description I have is it was the most 'technical' ride I ever had. We were missing the views picking our way thru the debris. 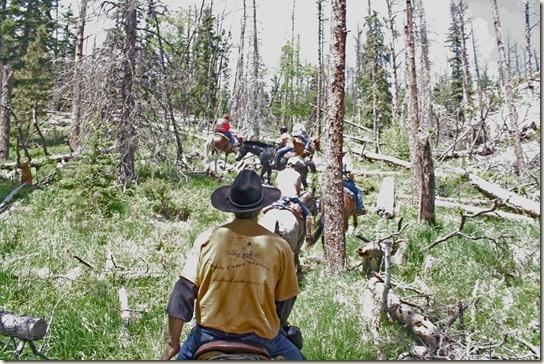 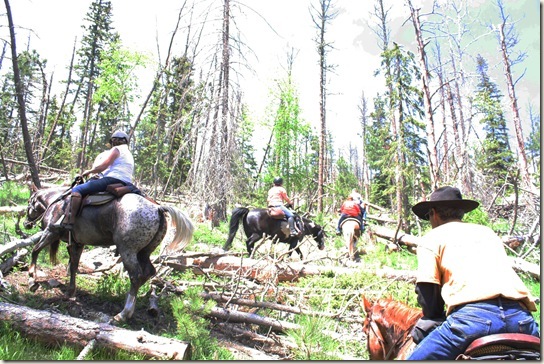 I didn’t get a lot of pictures in the bad stuff and when I did, some turned out like this.  I had forgotten to change the white balance on the manual setting.  But these pictures give you a good idea of what the trails were and how hard the horses had to negotiate their steps around the downed trees. 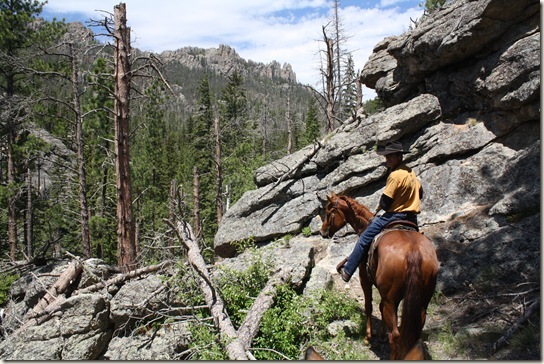 In this picture, you can see the narrow trail that Fancy must pass through; dead trees to her left and rock to her right. 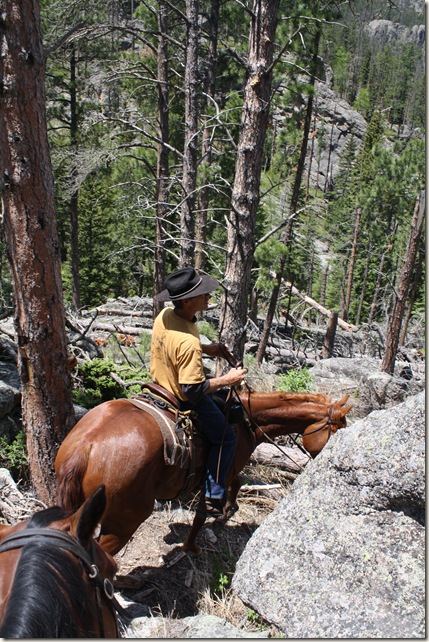 Under foot was rock and at times, the horses had to step over dead trees while on rock or uneven surfaces.  There were no areas not littered by the dead trees. 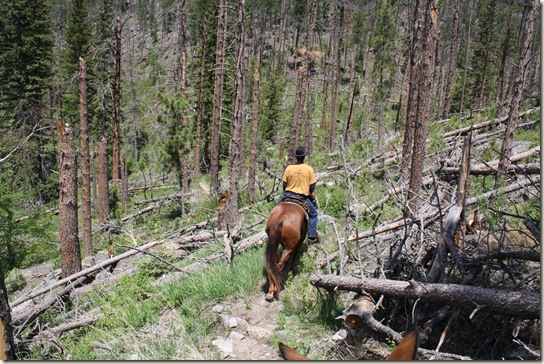 We were spent. Our horses were tired, we were tired. We came, we saw but there was not enough gumption in any of us, except maybe John and Rich, to go any farther. 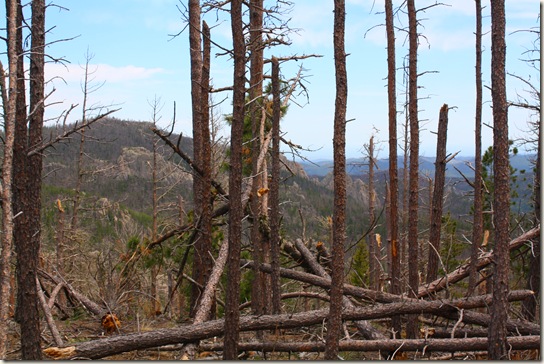 We lunched in the shadow of Harney Peak and then began our descent. Although faster - just because the horses knew we were going back, it was just as difficult. My elbows and forearms ache from bracing myself on the saddle horn going down the stairsteps or over rock. My thighs were burning. Seriously, over the fire later that night, I said that ride made a CTR feel like a walk in the park. We all agreed it was the hardest ride we ever have done. 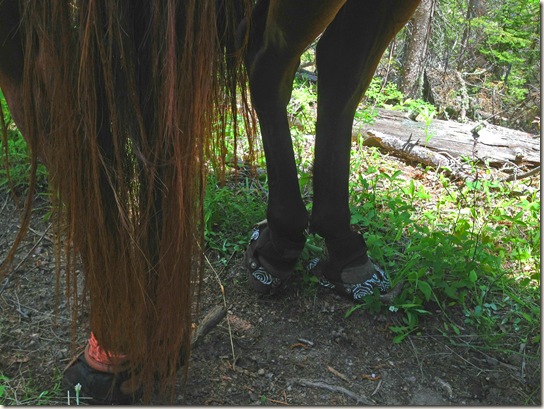 The horses did good, all things considered. They were all business although a few of them came back with some good cuts on their legs.  Fancy and Windy both wore back boots.  Fancy used the EasyBoot Trail and after numerous water crossings, the velro closure would no longer stay closed.  We ended up removing them on the ride back. 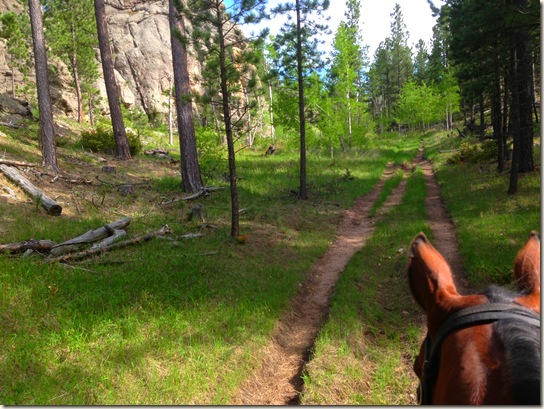 I had plenty of time to think about how far I had come with Windy. She didn't rush the hills, she kept my knees safe from most of the trees except once when she slipped. She drank good when we crossed the streams and she was surefooted.  She handled the trail well.  I couldn’t have been more proud of my horse or those horses who shared the trail with us that day.  They were tired, sore and no doubt, as exhausted as we were but they brought us back down safely.

The trail beat us that day.  The next morning we were looking forward to some easier riding.