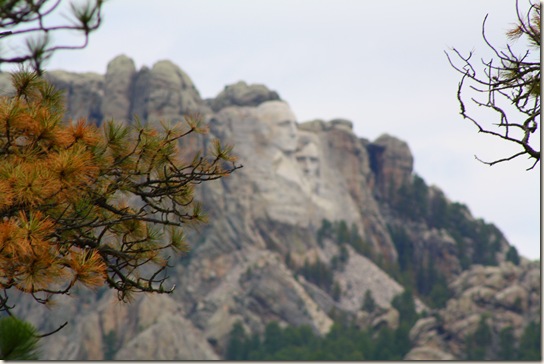 When we went to South Dakota in 2008, it was our intent to ride both Harney Peak and Mt. Rushmore.  Harney Peak was every thing I dreamed it would be but we didn’t make it to Mt. Rushmore that time.  I believe it was raining the day we planned to go and since we had reservations outside the area the following day, there wasn’t an option to ride it another day.  Short of an earthquake, our founding fathers weren’t going anywhere.  There would be another time.  Truth be known, everyone I talked to kept mentioning how bad the last part of the trail was; mentioning big steps and lacerations on horses.  I was kind of chicken to even try it!  But time passes.  Kind of like having a baby, you forget the bad things or at least tell yourself it really can’t be as bad as they say!

After Harney Hell, I emailed my friend, Sandy, who had just rode to Mt. Rushmore the week before and asked her if there was a lot of tree fall like the Harney Peak trail.  She told me the trail was clear and except for the last quarter mile or so, the trail was good.  Dang!  It sounded like the horse-killer steps were still there.  I told myself if it was that bad, that I would dismount and let Windy go up them alone.  We would ride to Mt. Rushmore. 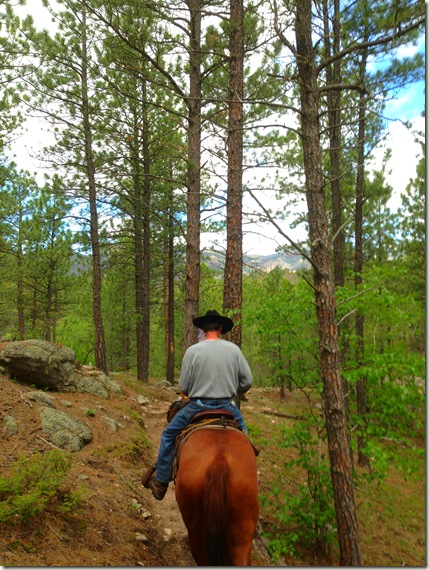 We started at the same trail head, Iron Creek Horse Camp but this time accessed Centennial Trail #89.   Immediately we knew this trail would be a good one.  There was none of the tree shed that we saw on Monday.  There was some rock at the very beginning and then it opened up into a nice, well traveled trail. 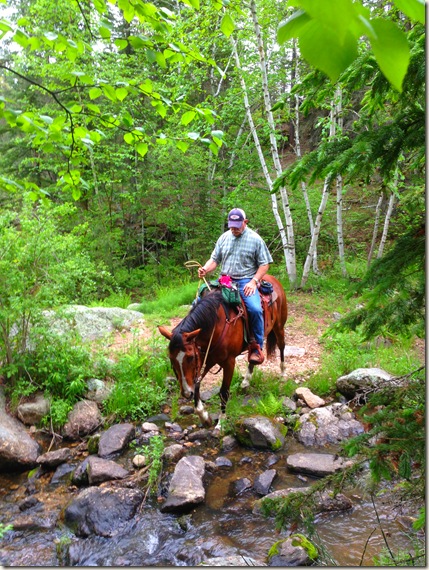 The ride to Mt. Rushmore was a little over five miles.  There were plenty of ups and downs and lots of stream to cross, so the horses had enough water along the way.  It was a cool day, so they traveled well. 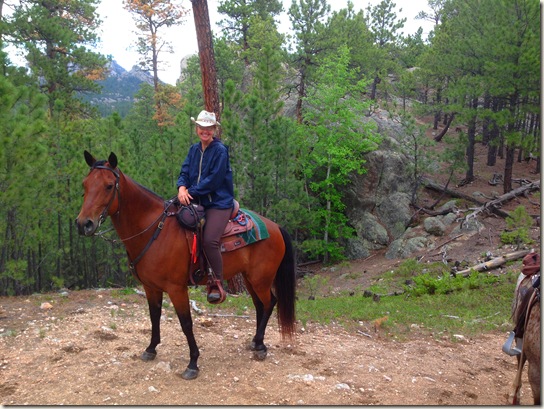 Me on the other hand did not come prepared!  I had a wind breaker and a tank top on and I was chilly.  I didn’t even have gloves in my pommel bag.  After suffering terribly from hot flashes while negotiating Harney Peak, it didn’t occur to me that on this day, I needed to dress warmly.  And yes, I am not sporting my helmet.  My hot flashes start at the back of my neck and continue up the back of my head and around my neck.  The helmet intensified it the other day and I opted not to wear it this day.  My head was on fire.  I have worn a helmet for years and under normal riding circumstances, they are not hot.  But if you have never experienced hot flashes, you won’t understand the type of heat your body expels.  It is crazy and terribly frustrating.  With that said, I was chilly that day and may have welcomed a hot flash just to take the chill off! 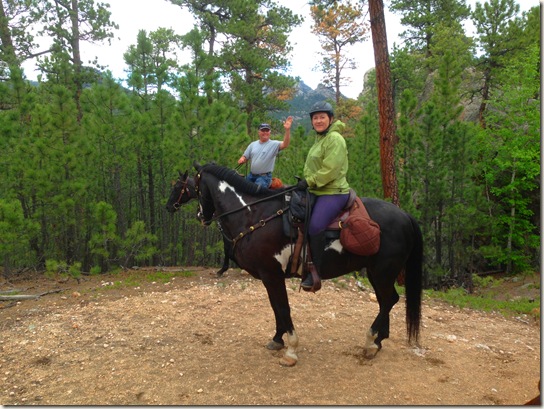 Along the way, we would catch a glimpse of Mt. Rushmore.  We would stop and take a picture.  Obviously, I missed George in this one but captured our photo-bomber!  Yes, we were still playing that game. 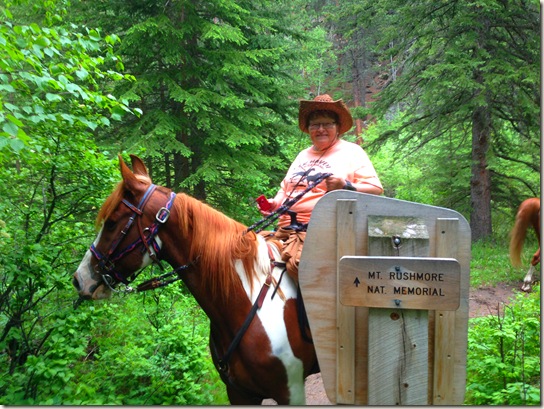 Finally, we got to Blackberry Trail which leads us to Mt. Rushmore.  We were spot on as far as mileage was concerned and it was estimated we would hit the bad stuff in about a 1/2 miles. 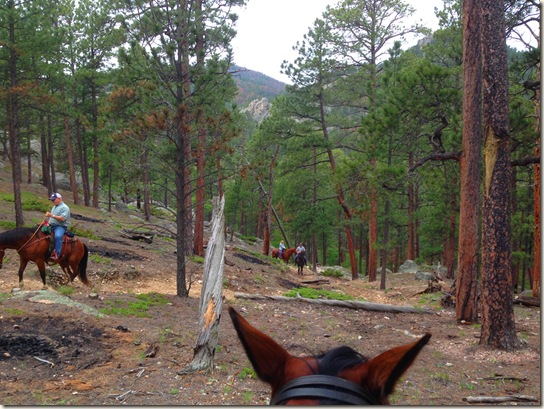 We came upon some rock but nothing bad.  Nothing compared to what we rode at Harney Peak.  When I reached the top and looked back at the riders still coming up, I thought to myself, “this is it?  This is the bad stuff?”  Whew!  Piece of cake!  And then I turned around. 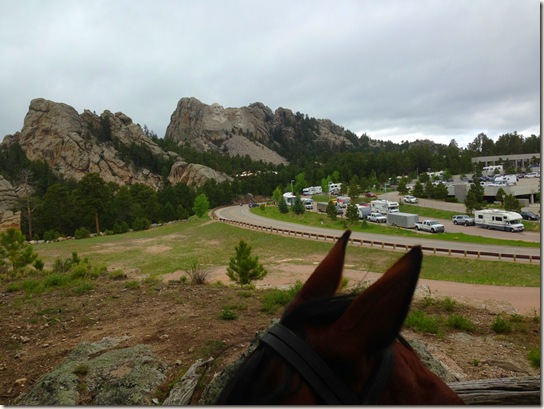 There they were!  George and Thomas and Teddy and Abe!  My parents brought me here as a kid, I brought my kids here and now I am here on my horse overlooking one of our country’s most recognized icon.  Mt. Rushmore.  It really took my breath away. 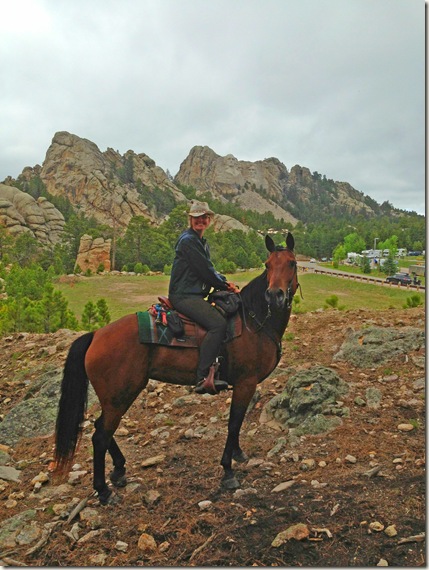 Kathy and I high-fived!  It was our do-over from 2008.  We finally made it it!  She snapped this picture of me which I texted to my boys and my boss and my co-worker. 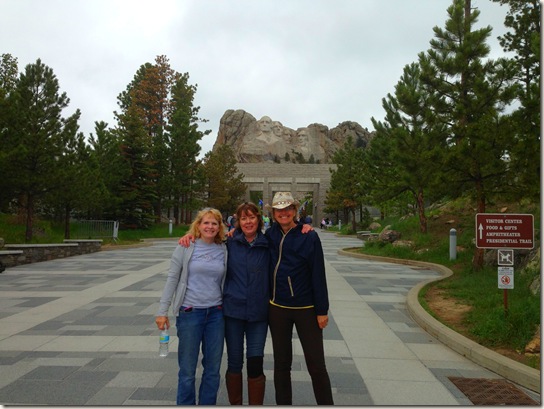 As we settled in to have lunch under the heads of our founding fathers, the chill was really starting to set in.  I made a comment that if I had a debit card on me, I would go to the gift shop and buy a sweatshirt.  One of the guys who were with us said he had a debit card and we could use it if we bought him one, too!  Score!  Remember the movie The Village?   It felt a little like that as Joni, Jules and I came out of the woods and into civilization.  I have to say, we were a bit giddy at the time.  We photo-bombed some strangers and then had some stranger take our picture.  And we power shopped for sweatshirts and headed back into the forest. 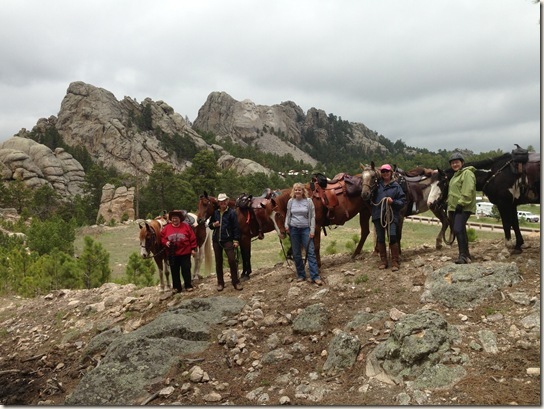 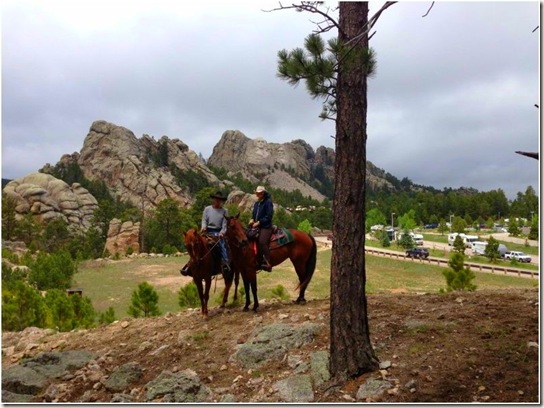 More pictures were taken from our spot on the hills.  Me with my husband, me with my BFFs.  It was truly an event to commemorate. 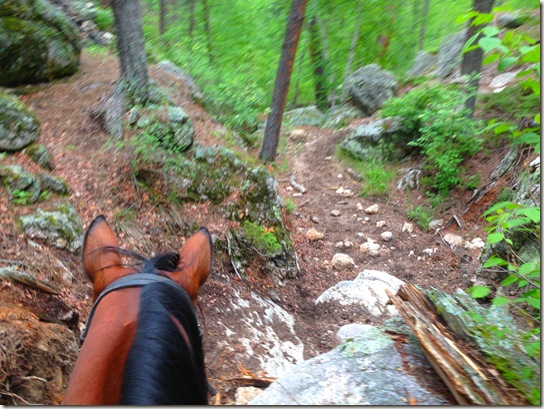 We saddled up and headed back down toward the trail head.  I swear I took a video of the bad spot but can’t find it so must have dreamed it.  Here is a picture of Windy negotiating one of those steps.  You’ll note I am taking a picture while she is looking, so it wasn’t too scary at all.  Joni assured me it was indeed a nasty end of the trail.  Since she wasn’t on Harney Peak with us, I believe her.

Other than Windy breaking her EasyBoot and me losing my sunglasses, it was a non-eventful ride as far as riding goes.  It was definitely a highlight of the trip for all of us.