When I was young, I would occasionally try to keep a diary.  You remember those, right?  A little blue or red or yellow plastic covered book with a key.  Like every girl who ever started a diary, I had hoped the pages would be filled with excitement and perhaps young love.  But in reality, some days I was lucky if I entered anything at all because “Got up, went to school and didn’t do much” seemed to be the norm.  It occurs to me today that keeping a diary was really blogging.  We just didn’t know it. 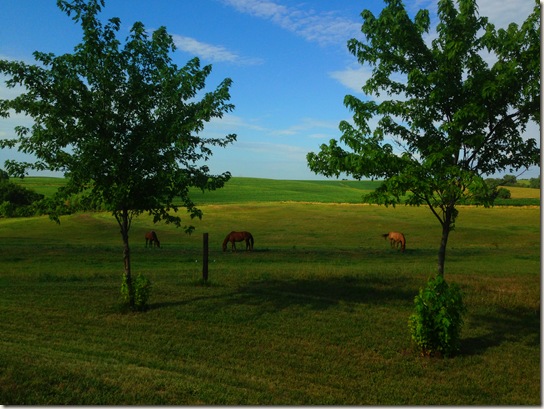 It’s July.  Definition:  hot, humid, and the drought has returned.  I can only take little doses of the heat because that combined with hot flashes about sends me to an early grave.  So while yesterday could have been one of those days not worthy of a diary entry, I ended up following The Tevis Cup race All. Day. Long.  When I say “followed”, I mean I was really into it.  I had a little spreadsheet going and everything.

If you aren’t familiar with endurance or distance riding, you may have never heard of The Tevis Cup 100 Miles One Day Race, officially named The Western States Trail Ride.  Simply put, it is a 100 mile endurance race that starts in Truckee and ends in Auburn, California and is deemed one of the most difficult endurance rides.  The Tevis Cup website is loaded with history about the ride and the trail so I won’t fill my pages with that information, but do read at your leisure.  It is quite interesting.

I perused the names of the riders who entered the 2013 Tevis Cup.  No, I don’t know any of them personally, but a few I can say I am one degree from knowing.  Barbara White who was going for her 33rd completion is the daughter of Julie Suhr, the grand dame of endurance riding, having 22 completions.  I arranged for Julie to come here to our Expo a few years ago and enjoyed visiting with her that weekend.  Ken Wolgram rides Competitive Trail in our area and many of my CTR friends have met Ken over the years.  Following the ride last year, I saw a few of the same names making a return trip.  I copied the rider list into Excel and highlighted those I wanted to closely watch.

The Tevis webcast is not what you think.  There isn’t a video camera following riders as they race up the mountain and in the canyons.  But as technology has evolved, volunteers are able to keep “viewers” updated as the the location of their favorite rider.  You can click on their name and see their entry picture with their horse of course, what riders really want to see!  There is also a Tevis Facebook page which ran updates and pictures.

So throughout the day, as the webcast was updated, I would update my spread sheet, too.   And it provided me with some fun stats at the end of the race.  And as I share this, please note that it is as accurate as I could get but may not be 100%.  I had no one to check my work – it is what it is.

While mostly Arabians (and what is with all the fractions?), there were some other breeds represented as well.  I saw a picture of the Friesen X on Facebook.  Most likely the X represented an Arab and boy, was it a looker!  There were riders from 16 states and 7 countries.   My stats told me there were more bay horses than any other color, gray following second. 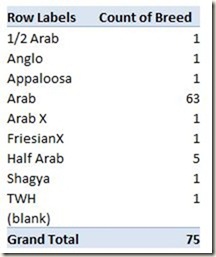 Of those that finished, only a handful were not Arab.  One of the Friesians made it!  And an Appaloosa!  Just one gaited horse crossed the finish line, a Tennessee Walker.  The states were well represented at the finish line, too. 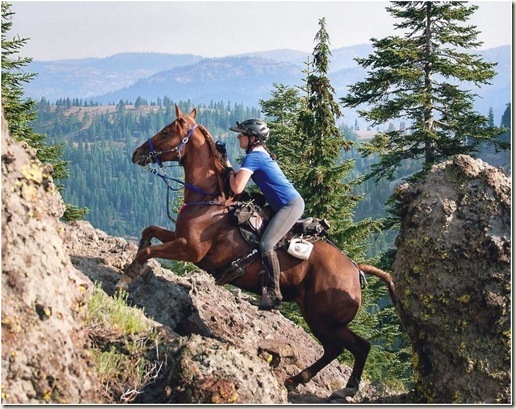 The ride was not without tragedy.  The Tevis Facebook page first mentioned that a rider pulled near the famous Cougar Rock.  We then heard there had been an accident; the rider was fine but a vet was called for the horse.  We later learned it had severe neck injuries and was euthanized.  This is not the norm for this ride and it is very sad.  My heart breaks for the rider.  She will be reminded every time she sees a picture of a rider crossing Cougar Rock.   (The above photo was taken from the internet and is NOT the rider I mention in this post.) 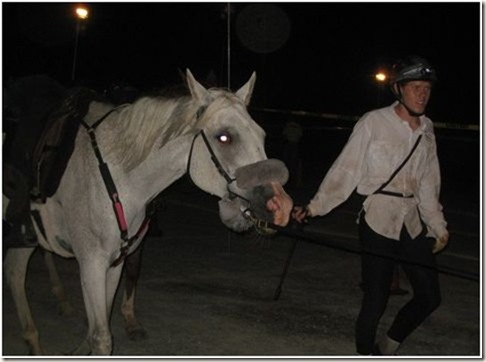 A young Junior rider caught my eye early in the webcast.  He was 15 years old and riding with his mother.  They were at the head of the race most of the day.  There was a lot of chatter on Facebook saying he was a true contender.  While the Durango, CO boys (EasyCare?) were on their tails, they were still in the lead when John interrupted me to go to dinner.  (Huh?  I’m “watching” Tevis!)  And when I returned, it appeared that others had taken the lead and the Junior rider, John Donley, was pulled at the last vet check.  His mom finished the ride in 6th place.  (The above picture was taken of John Donley at the Lower Quarry by my friend, Sheila, who was a volunteer at that location.) 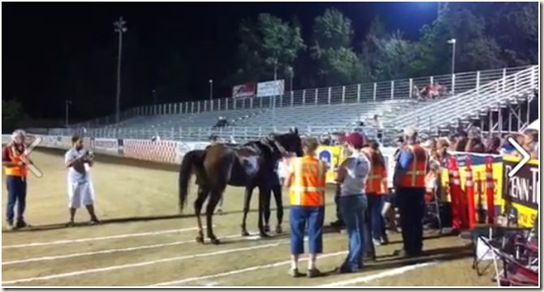 As it turned out, Rusty Toth, last year’s Haggin Cup winner for best condition  took the Tevis Cup this year, completing in around 17 hours.  The video clip of him cantering over the finish line and hugging his horse after the vet deemed it sound (above) was a touching end to a long day.

The Tevis Cup is not on my bucket list although I wouldn’t mind riding some of the trail on a pleasure ride.  My friend, Sheila, now lives in that area and it seems reason enough to visit.  It was her first year volunteering and perhaps I can join her some year.  Being in the midst of it would be something I would like to do.