You may or may not have seen what I posted about the Ne-Kota Turkey Trot Competitive Trail Ride (CTR) on Facebook.  John was driving coming home and being without cell coverage for the better part of three days, I was most anxious to touch base with the outer world.  This is the second time in three weeks I have been to this part of the state and find cell service is extremely limited.  Being the connected junkie that I am, I surmised that I could not live in this part of the state!  End of rant.

Usually when getting ready for a CTR, I like to have time to prepare. Bathe the horse at home, Show Sheen & all that jazz. But I had to work Friday morning and John worked until about 2:00 that afternoon, so we gave them the quick rinse and loaded them up to head for Turkey Creek, about a two hour drive.  I had recruited our friends, Mary and Dwight, into doing the CTR and she texted me that they had arrived.  John, Mary and Dwight would be first time competitors.  I have to admit I was a little nervous being the “experienced” CTRer because I have always rode with who I considered an experienced CTRer and had never really graduated to the “lead” in my book.

We arrived at the beautiful Turkey Creek Ranch and were told if we hurried and got checked in, we could still show to the judge before dinner rather than in the morning.  We both weighed in Novice Heavyweight. If I could would have rode with my nylon saddle, I probably could have went lightweight but I like my good trail saddle. But did make me feel good about losing the weight this year.

Windy showed beautifully to the judge.  She had a nice trot-out and lunged decently.  John fumbled with Fancy because he doesn't lunge good but Fancy forgave him his errors and showed well.  We had dinner, a ride meeting and then hit the sack. Ride time scheduled for 0800.

It started raining about midnight. What is it with rain and CTRs? I am starting to feel like the rainmaker! The ride time was delayed until trail could be rerouted.  Turkey Creek is very hilly with steep climbs.  It is a difficult trail on a dry day and very slick when wet.  You may recall my story from a few years ago.   It's terribly slick on all those hills. Management Shari Parys, Robin Nore & Mary McCoy had a Plan B in place and just needed to do some rerouting. We rode out at 10:45 and it was a crisp, cool fall day. 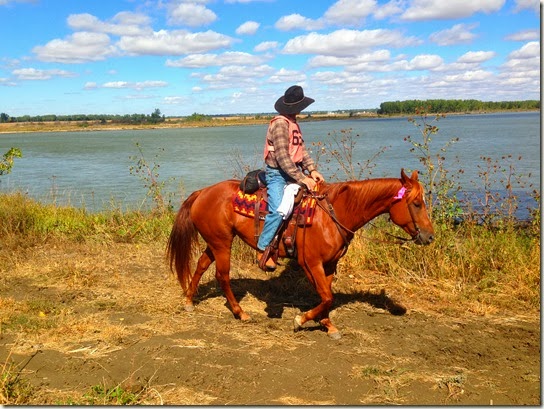 Leaving camp, we were stopped right away by the judging team.  They asked us to simply step over a log and move on.  I think this was the only thing I got right in two days. Although she did ding it with her hoof, I didn't lose a point. Mary and Dwight moved out quickly ahead of us on the rerouted path thru the grass.  I put Windy behind John to calm her down a bit and Fancy set a nice pace.  Some gals passed us and turned. We followed them initially but I realized real quick they were on the wrong trail, so John and I turned back and righted ourselves. The next excitement came from a trail marker hooked to a large turkey cut out. Fancy almost fainted and Windy wouldn't go anywhere near it. Too funny. 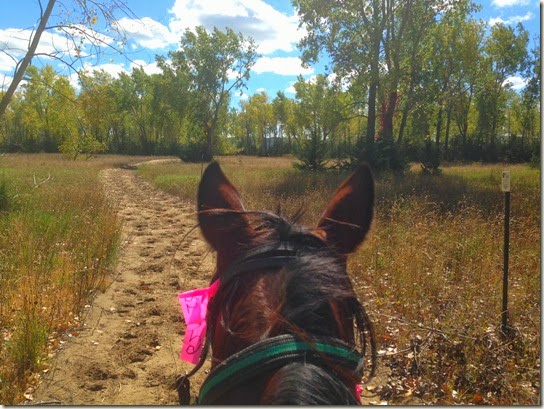 Windy was a handful like she was last year at Indian Cave.  I needed to remind her (over and over and over) that this was not a race and we didn’t care about the horses she couldn’t see in front of us!  At times even following Fancy wasn’t appeasing her. Whoever said riding horses wasn’t exercising should have tried riding Windy that morning!  We finally caught up with Dwight & Mary and she settled some. 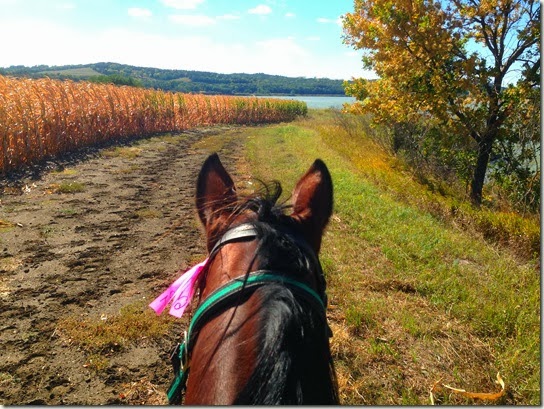 The next time we saw the judges, they asked us to sidepass a big log.  This is something Windy and I have done over and over and over again – so much so that she almost anticipates it and will start to move down the log before I even ask her.  I was hopeful she would comply.  Fancy and John did it first and Fancy moved very nice. Huh? When did John learn how to ask for a sidepass?  I moved Windy over the log and asked her to whoa.  She did.  I asked her to move off my leg and she didn’t.  She stepped off the log.  The bitch. 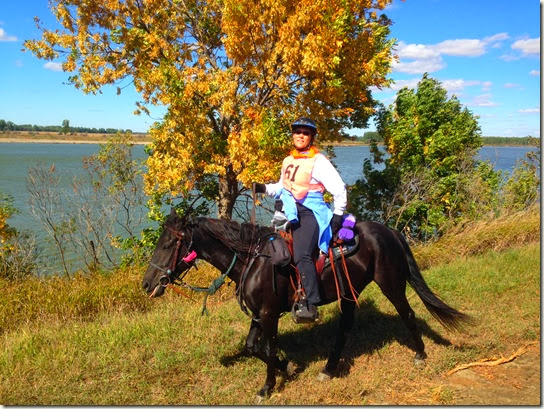 The trail took us over across the road and the first pulse and respiration stop (P & R).  Fancy stood like a showmanship horse and Windy fidgeted.  And fidgeted and fidgeted.  They both pulsed down okay – Windy at 12/6 which saved me from losing a point, thank goodness, but she was fit to be tied.  I took her away from the P & Rs and lunged her a bit and then got on her.  As soon as we walked off, I realized I hadn't fastened her throat latch.  So I got off her, fastened it and got back on.  This time, my mount was terrible and of course there was a judge there.  I’ll take the blame for this one since I forgot to hook it in the first place.  When we caught up with Mary and Dwight, Mary told me my throat latch was weaved thru my halter. Oh for Pete's sake! 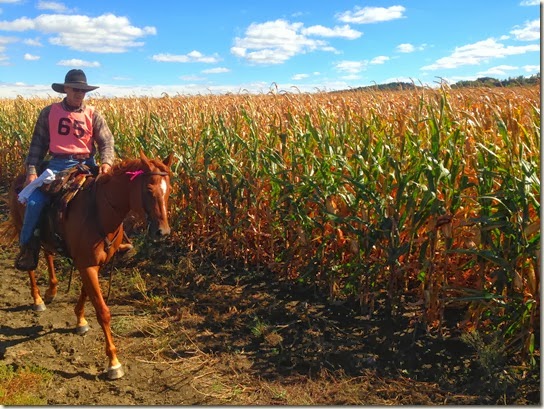 The trail thru Rod's Pasture and out along the river was very pretty. They kept us off the high trails due to rain but this was so nice in its own right. The footing on these sand trails was just fantastic.  At times we would ride with Mary and Dwight and other times, they would move out and we would stay on our own.  Once, when we were all together, the judges stopped us and did a quick metabolic check and our horses all checked out fine.  Then they asked us to back our horse between two trees. Something else we practice.  Windy has a very pretty collected back….. when she wants to!  Evidently this was not the day.  FAIL!  John and Fancy were up next and of course they nailed it. And in the voice of Forest Gump, "That's all I got to say about that!"

About 1/2 mile from the next P & R, a volunteer stopped us and told us to begin trotting and continue to trot into the P & R.  No pleasure trotting, a “real” trot.  Windy loves to trot so I put her in front and off we went.  We came in and our first P & R was lower than the earlier on. Like 10/6!   She stood pretty good this time. When she had the final P & R (the one that counts) she started kicking off flies and swishing her tail.  It recorded at 13/6.  I could take it and lose a point or ask for a retake.  But I have to take the retake even if it is higher.  I gambled that the fly was gone and won.  She pulsed out at 12 which is no loss. Back on the trail.

The rain route shortened the ride to a little over eighteen miles.  We were running ahead of time and had to hold at the 2 mile marker for a bout 2 minutes so we wouldn’t come in ahead of time.  When we got back to camp, the judge asked us to trot a circle in saddle for a soundness check.  I put Windy in a beautiful collected trot and she performed like she should and was deemed sound.  Thank goodness.

That was the end of the first day.

(Unfortunately, I don’t have a lot of pictures.  I made the mistake of updating my iPhone to OS7 the day I left and some of the functionality changed.  Between a hard ride, bright sunlight and new controls, it was a wonder I got any at all!  I hope I have enough to give you a taste of the ride.) 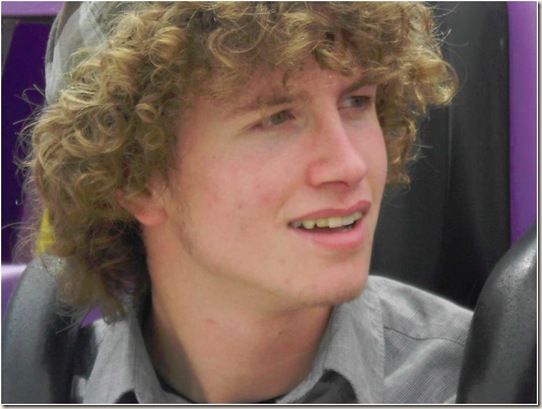 I have big news.  Just as I was settling into my Monday morning routine at work, McCain – my oldest son – called.  He said, “I think you are going to want to come home.”  My first thought was the horses were out.  Crazy how the mind works.  But no, they were fine.  McCain was on the delayed enlistment program with the US Marines.  He was scheduled to go to boot camp in February of 2014.  Well, they had an opening and asked if he was interested and he took it.  He was leaving in 24 hours. 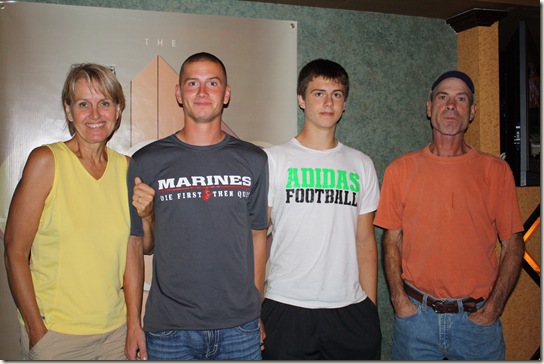 I don’t think there is a mother in the world who wouldn’t have reservations about their son or daughter joining the service.  He had talked about it occasionally during high school and then this past summer got interested enough to visit with a recruiter.  John and I met with him, too, and while I would like him to continue to do lawn service the rest of his life, I also know this could be good for him in so many ways.  And since he wasn’t scheduled to go until February, I thought maybe we would have this war deal all wrapped up and he would get to visit some place nice like France.  Wishful thinking. 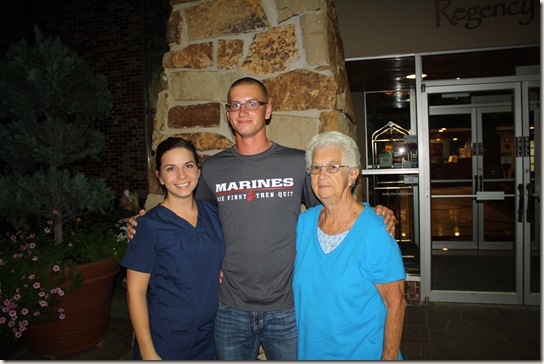 I would have loved to have a big going away party for him, but there was no time.  My brother and his significant other, a couple nieces and a nephew and McCain’s Nana joined all of us on Monday night for a dinner at the hotel where McCain was staying.  There were other recruits there, but he was the only one going to the Marines.  I was glad we had the time together but what do you say to each other?  Life as he knows it and we know it is now forever changed. 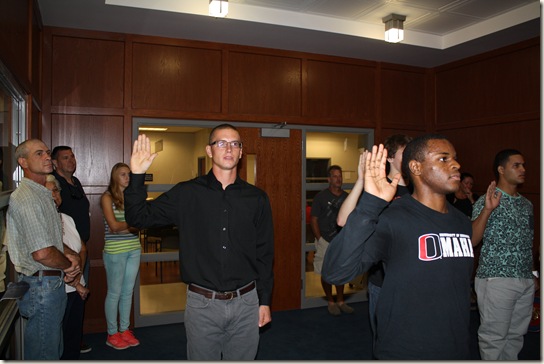 The next day, we joined him at the processing center where he was sworn in.  They asked us not to go to the airport.  He was whisked off to San Diego.  We got one phone call to tell us he arrived safely.  It’s all started now.   I’m told he won’t be the same kid when I see him again.  That worries me.  I kind of liked that kid.  I’m still numb.  And maybe a bit in denial.  But very proud. 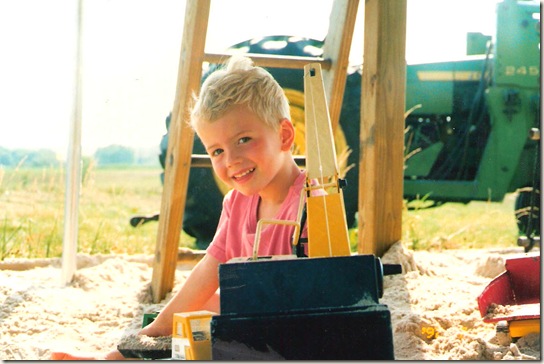