Just Get On Your Horse–Day 2 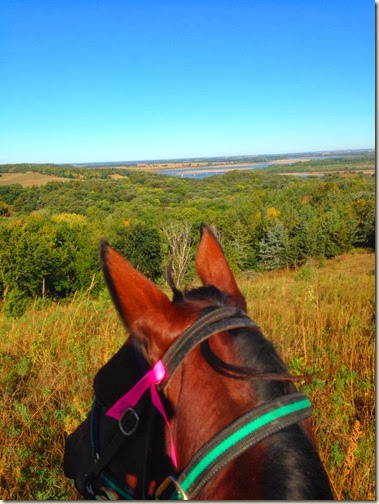 There was no rain overnight.  The sun came up and it was going to be a beautiful fall day for a ride.   The horses looked good.  We saddled up.

We were scheduled to ride out at 8:00 AM, but the judges told us at the ride meeting the night before that they would be having a judged mount and a trot- by beginning at 7:15 AM.  We lined up in no particular order; Dwight and Mary, John and then me.  I noticed the judge was asking riders to sidepass the horse inhand to a picnic table and then mount.  I quietly asked Windy for a sidepass as we waited and she moved off to my touch.  Good girl.

When the judge called my name, he approached me and asked if I had a hoof pick and a knife.  I did.  Whew!  Then he asked me for the sidepass.  I moved her just like we had practiced and she refused.  I wanted to kick her in the gut!  (smile)  After some struggles, I got her to the picnic table but as soon as I stepped up to mount, the witch moved away from me.  We did this a couple times and I finally reminded the judge that the last time I rode under him, he told the riders they dink around too long getting on the horse and sometimes 'you just need to get on the horse', so I was just getting on my horse.  Who gives a shit if she was 2 foot away from the table? 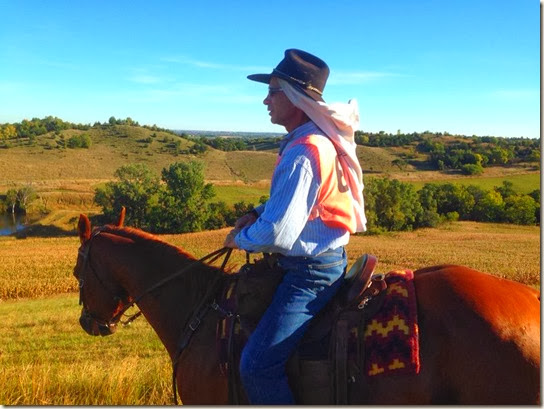 When we trotted a circle, the vet judge said she was a bit short-strided in the trot and to warm her up a bit and come back.  I took her in the back pasture and ran her up a hill. She kind of bucked up it so we did it again.  I rode her for about 5 minutes at a trot or lope.  When I came back, the judge said that she looked better but she was kind of dragging her hind toes a bit.  She does this all the time so it is what it is. 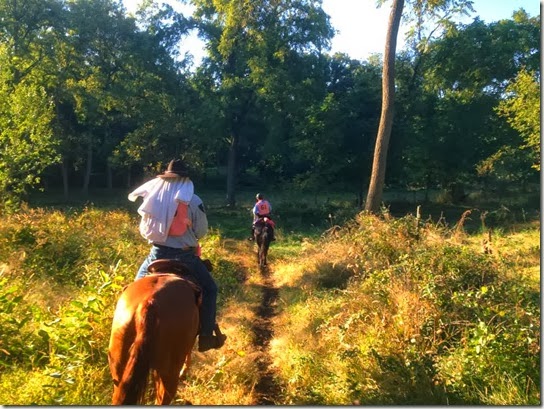 We were back on the trails that were originally planned for that day with lots of hills.  So to make up for those climbs, we did a lot of trotting on the flats.  Once on top, the views were breathtaking.  New phone functionality prevented me from getting a lot of good shots and with the sun, I had trouble seeing the screen.  Sometimes you just have to appreciate what you see rather than mess with what you have to record it.  I hope I remember the beauty of it for a long, long time.

The first obstacle was right out of camp. Cross a bridge.  It wasn't a bridge over a creek but a bridge that was constructed for an arena or ground games.  We have one of those and the horses should be fine with it.  Fancy was in front and she stopped, put her nose to it and then stepped on it and crossed it. Windy approached it.  Then she stopped.  And then she swerved to avoid the bridge.  We tried again.  No go.  The judge told us to move on.  We moved on. (Shaking head…)

When we came into our first P & R, all the horses vitals were all high. I think Windy was 16/9. I loosened the saddle and started to fan her.  A P & R volunteer refilled my water bottle and I poured it on her neck and chest.  At the appropriate time, she pulsed down to 12/6 so we were good to go. Another rider had came in after me and asked if I would stay so his horse wouldn't get anxious. He had 5 more minutes at the hold.  John and I weren't in a big hurry, so we stayed until he got his final read. 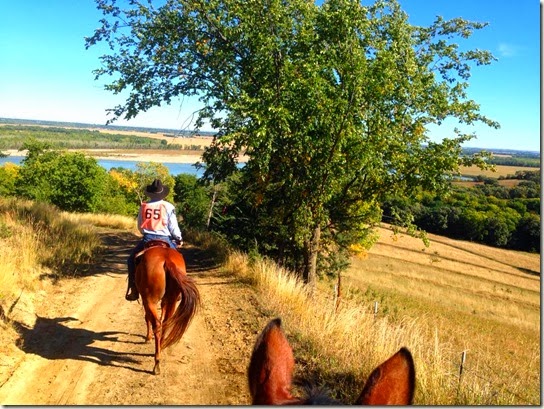 We watered the horses and then had another judged mount. By this time, I just lined up Windy to the mounting block to get on. She walked off on me (of course she would) and the horsemanship judge laughed and said 'just get on the horse!'  We were then asked to do a 360 on the forehand. We tried and she didn’t plant her front hooves, but at this point, who cares. John told me later he didn't even know what a turn on the forehand meant. I told him from what I could see, it looked like he may have nailed it (of course he would!) 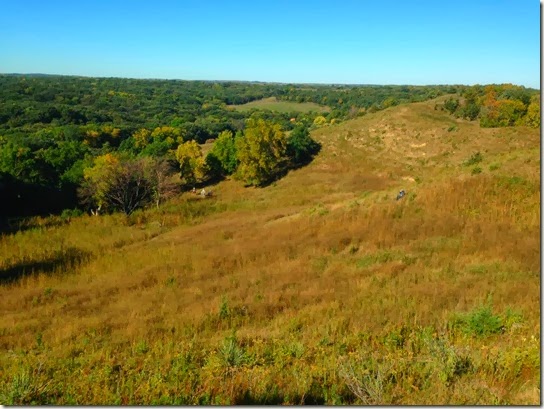 The ridge above what’s known as Rod's pasture offered breathtaking views again with the river below us. We looped around and went back through a cow pasture and up to Rod's cabin. We did the outer loop trail and then stopped for the last P & R. Finally Windy stood without issue. She was tired. We headed out to do the inner loop. The judge just asked us to follow ribbons down hill. I got a "good" here on my score card. About time! 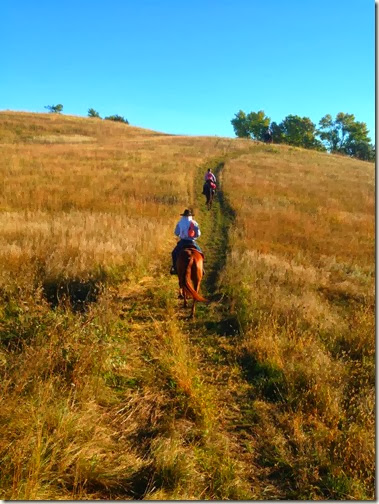 After a short wait at the two mile marker we rode in just at mid-time like we had hoped.  We rinsed the horses off and grabbed a quick bite to eat while they were drying.  As I walked away from the lunch area, the vet judged stopped me and asked where I had found Fancy.  I told her about John losing Ginger and how he wanted another little red mare and what a gem Fancy was and the vet agreed.  That was nice to hear.  We got the horses ready and showed them to the judge for the final time. 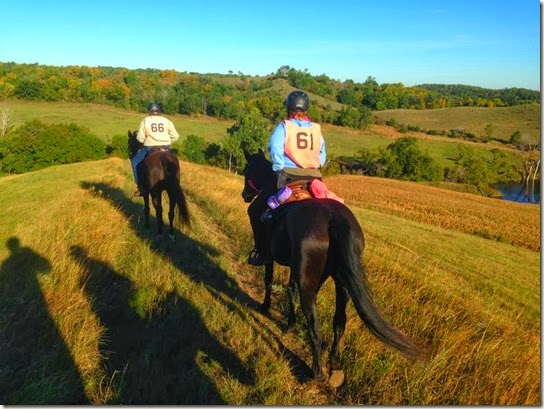 The vet judge found no problems with her metabolics; good hydration, good gut sounds and fill.  Her way of going was the same as when we checked in, so that was all good, too.  I enjoyed talking with the vet as we wrapped up the examination.  Frank, the horsemanship judge, had mentioned at the ride briefing the night before about walking in a circle with the horse as you lunge them, using a 10 foot lead rather than a long lunge line.  I have to see things to understand them so I mentioned to him that I would try it and he came out to show me.  Windy moved off gracefully and looked nice. If nothing else, she sure is pretty and no matter how naughty she was on the ride, she still takes my breath away. 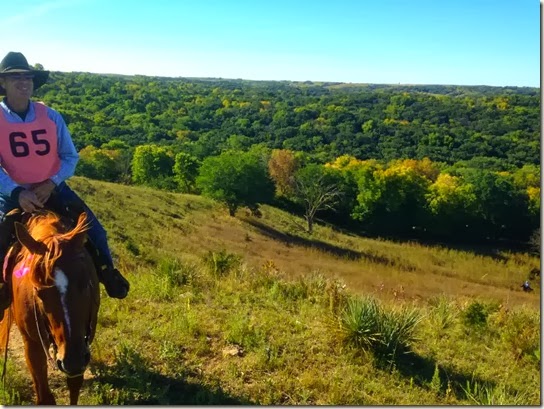 To those who don't know the game, the horse and the rider both start the CTR with 100 points.  The object of the competition is to not lose any points.  The horse and the rider are both scored independently so a horse may place higher than a rider and it is possible for a horse to place in the competition but not the rider or vice versa.  Windy scored 40/40 for Condition and 44/45 points for Soundness.  She was dinged one point for dragging that toe.  Trail Ability & Manners. OMG! She lost 10 of the 15 points because of her refusal to do obstacles.  My inability to ask my horse to perform pretty much had the same affect on my score card.  Like I said, it is what it is. 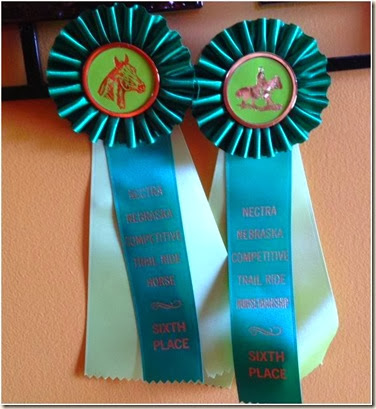 My horse and I both came in 6th place out of 6 riders.  Or in other words, DEAD LAST!  I have to remember that she came in 2nd place out of 12 or 13 horses the last time we completed a CTR in 2010.   I had been working with her then, but the last couple years, I have been riding for Distance Derby miles. I shouldn't expect more than I put out. Things to practice. :)  Mary, Dwight and John all had good rides. There were two other people in our class as well. One guy, Alan, usually always places and is real close to ribboning out novice, I would think. There was one other rider besides John and my friends and I wasn't sure who would fall in what place. 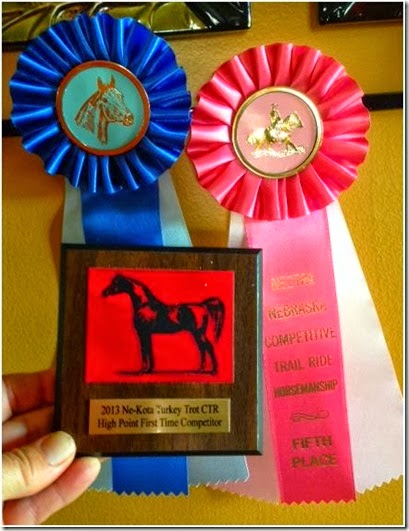 They called the horse placings first and Windy got her 6th place ribbon. I think Dwight's horse was 5th and Mary's horse place 4th.  The 3rd place ribbon went to another horse.  When they called the 2nd place winner and it wasn’t Fancy, that only meant one thing.  That our Fancy-Pants had won it!  She got the first place ribbon with 99 out of 100 points!  We were both so proud of her! 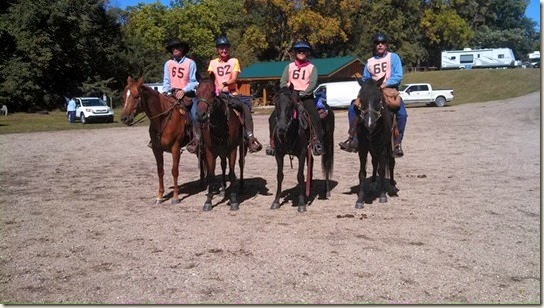 As a rider, John placed 5th, Dwight 4th and Mary was 3rd.  Next, they announced that John and Fancy won High Point Combined Score for first time competitor.  And THEN they also won Sweepstakes in our class - their combined scores higher than everyone in our class!  What a great first ride!  I was so proud of them both. 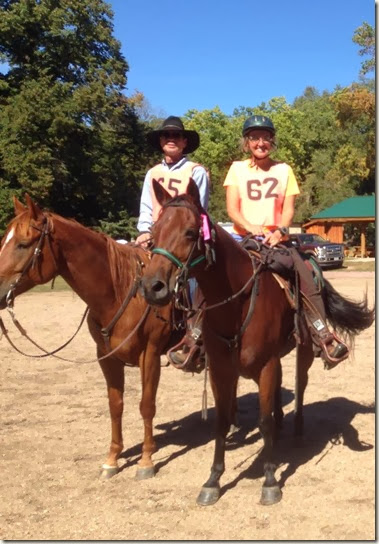 The best part about the ride was having John ride with me and that he enjoyed it  And guess what?  Next weekend we are going to do the Indian Cave CTR together.  And we just might switch horses for the ride.  (Wink!)