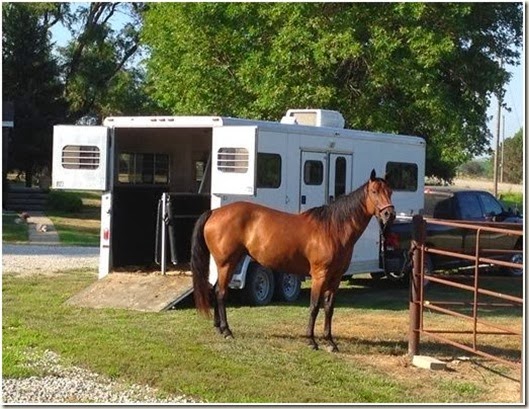 Seriously, I didn’t plan to buy a new trailer this year.  I didn’t really think I would be buying one for several years.  Oh, the thought crossed my mind occasionally or every time I fell over John’s boots in our Sundowner.  I kept telling him to put them in the back of the trailer and he said they would be too cold in the morning.  Since my Luggable Loo was back there, I knew all about the chilly mornings in the back of the trailer!  Then add the dogs to the mix – yes, it seems Nahla is now a camping dog, too – and the walls of my little Sundowner started to close in on me.

I was scrolling through the online horse trailer ads and found what I thought would be the perfect trailer for us.  Never mind that it was in Tennessee!  I had the bug really bad!  So bad that I listed mine for sale and sold it in a matter of days.  It seemed to be a hot little item!  Then I talked John into driving to the AQHA World Show in Oklahoma City.  What a great opportunity to see all the choices side by side at that event’s huge trade show!  The night before we were to leave for Oklahoma, we went and looked at a trailer locally that some friends, Jody and Rich, were selling.  Seriously, it was everything we wanted and almost brand spanking new.  John said perhaps we didn’t need to go to Oklahoma after all.  But I wanted to shop around. 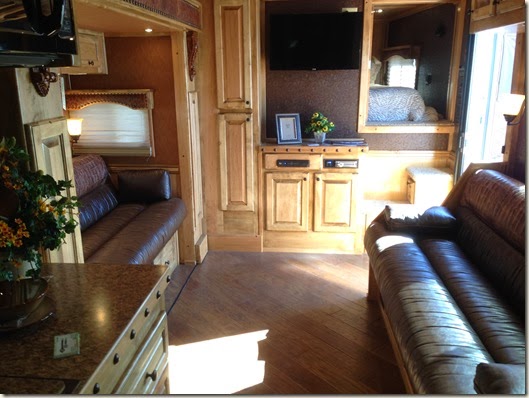 I could drag this post out about every trailer we saw at the World Show last weekend.  (Example is the one in the picture above).  It came down to going outside our budget to get a top of the line model, buying one a bit more affordable but without all the bells and whistles we wanted or going home and buying the one we looked at before we left for Oklahoma.  I called my friends and it was still available so we headed back to Nebraska. 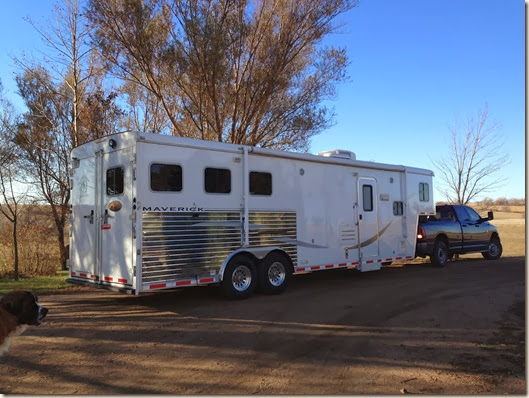 Our new-to-us trailer is a 2012 Maverick.  It is a 3 horse trailer with a 13’ short wall living quarters, 8’ wide and 25’ on the floor.  I wanted a 3 horse, I wanted 8 foot wide.  I originally had my heart set on a slide-out, but John was not keen on that idea, so by going with a longer short wall, I got the space that I wanted.  It’s only a foot longer than our old 4 horse Titan.   It has the living quarter door on the curb side which was what I wanted.  It has a huge awning, too.  Having had one on my Titan that we rarely used, an awning was not on my list of “must have” items.  But it is certainly nice to get one by default. 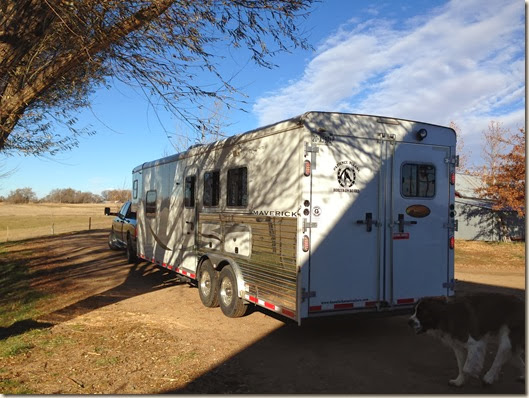 It has a rear removable tack room and mangers on the side.  Both of these items were on my wish list.  There are lights on both sides of the trailer and a loading light on the back.  After having to saddle in the dark at the last CTR, having lights on both sides was on my must have list. 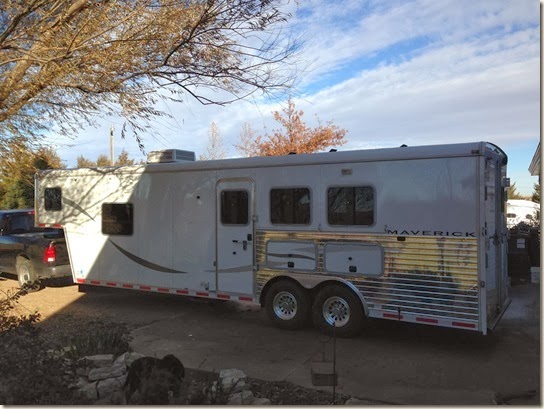 The Maverick is made by Hoosier Trailers and manufactured in Indiana.  It is steel framed and aluminum skinned.  Although I was hoping for all aluminum, we were okay with this combination.  Our trailer is shedded and we don’t usually drive it in the winter, so the steel frame does not scare us; just adds some weight to the overall rig. 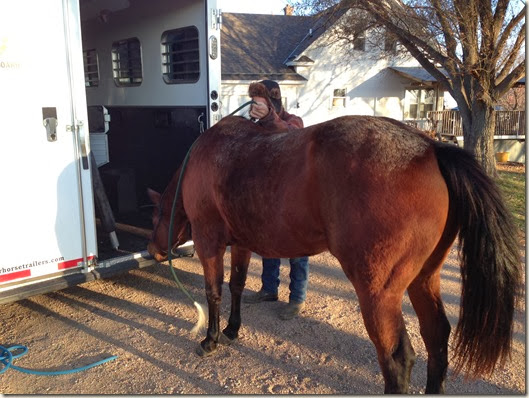 We let the mares step into it today.  Windy snorted a few times before proceeding.  It has been awhile since she has been in a slant load trailer as both my Sundowners – the one I sold and my bumper pull – are straight loads. 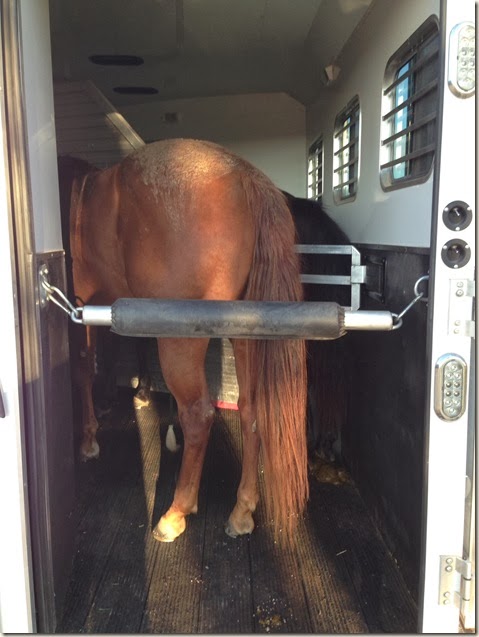 I was a bit worried if Fancy would back out.  She is used to stepping out on a ramp and since she has been with us, not loaded in a slant.  But she had no problems loading or unloading.  By the way, the floor is a Rumber floor.

When I unloaded my Sundowner last week, I stored all the items in my living quarters in the SUV.  So today, I moved into our new Maverick.  Now for the good stuff!  Let me take you on a little tour. 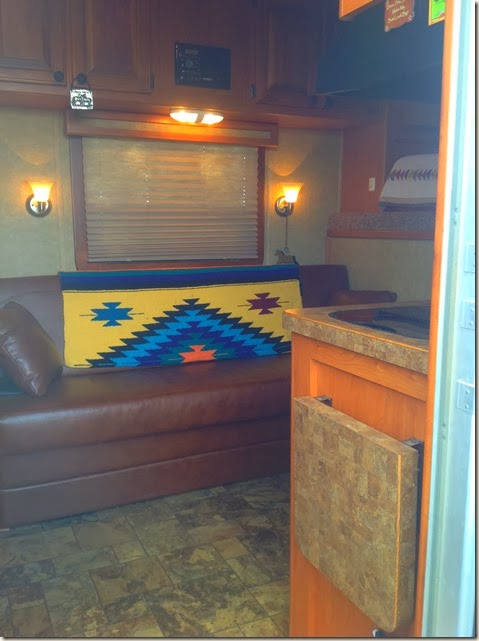 This first shot is looking in the door.  I had the Navajo blanket on the bed in my old trailer and thought it would add a splash of color to this new trailer.  I hope to incorporate some of its color into the sconces behind it as well. 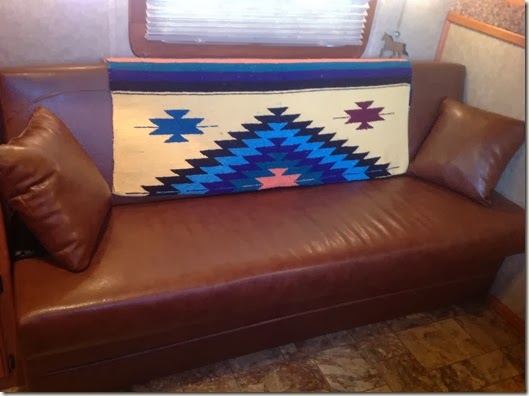 The couch is very comfortable – might be some memory foam in it – and folds down into a bed.  I hope to get some different pillows to add a little more color to the room. 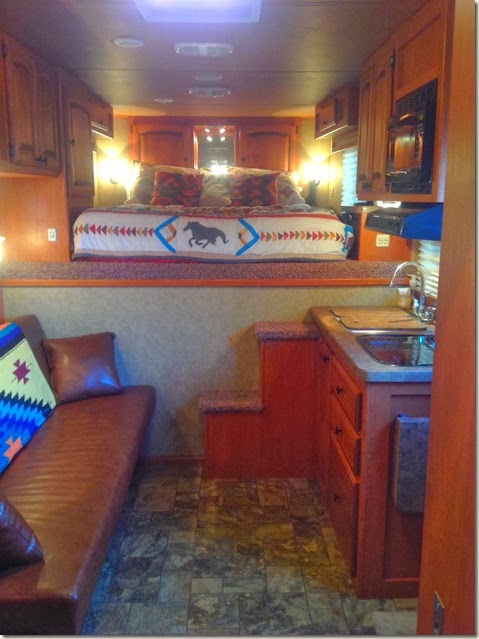 The trailer came with the mattress which Jody had purchased for it.  I added the memory foam mattress I had in my Sundowner and it makes for a very comfortable bed.  I used the bedding I had in that trailer but will be on the lookout for something new in those Navajo colors. 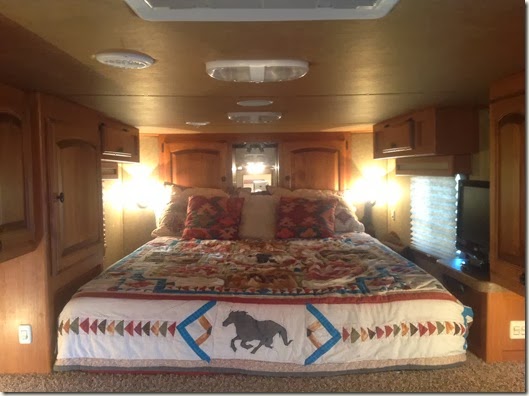 There are tons of cupboards.  Oh. My. Gosh.  I could bring the kitchen sink if it didn’t already have one!  That cupboard on the left is John’s.  It even has a bar for him to hang his clothes.  He won’t have to put his bag in the back.  And look on the right.  A TV!  I bought this TV for my Sundowner several years ago and John would never install it.  Long story.  But here is my TV!!  And check out all the lights and the light switches.  I won’t need my little LED flashlights any more! 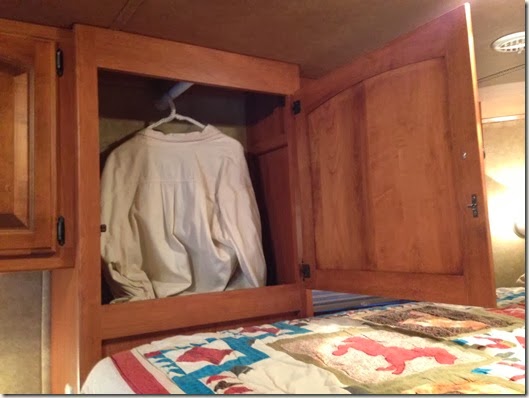 John’s cupboard opened.  Look how much space he has!  He has enough room in his cupboard to also store the big owners manual for this trailer! 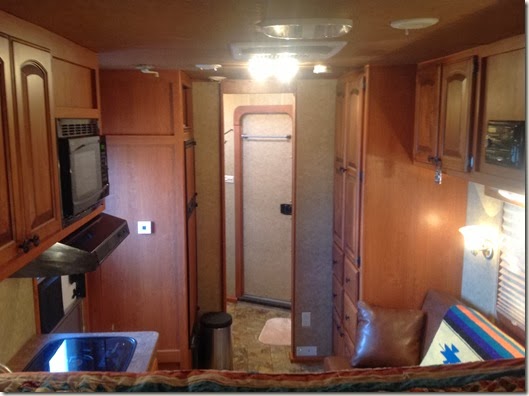 Here would be the view from the bed to the back of the trailer.  What is beyond that first door?  Just wait and see! 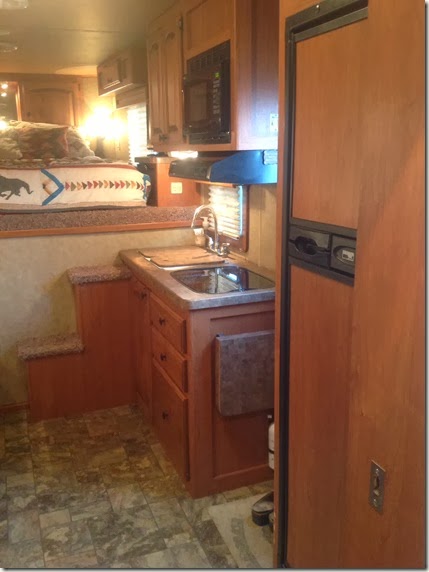 Having a flat top stove was also on my list and viola, I got one of those, too!  And if case you didn’t notice the big mammoth refrigerator to the right of the above picture, it is there.  And I love it.  Complete with a freezer!  It runs on electricity or propane so I can use it when we have full power or are boon docking. 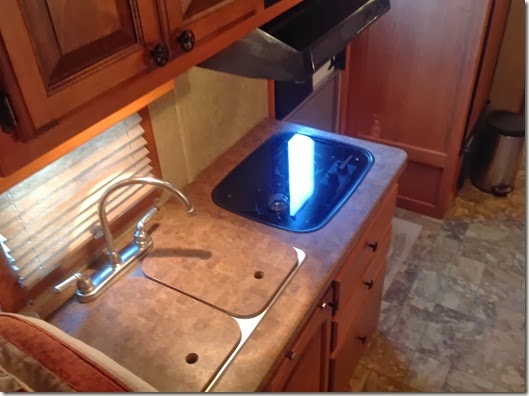 On a popular horse trail riding Facebook page, I asked members what they liked about their living quarters.  Many said their double sink.  Admittedly, this wasn’t something I thought about as dishes are never at the top of my list.  But since it was important to some, perhaps it will be something I appreciate. 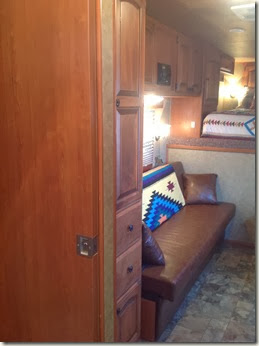 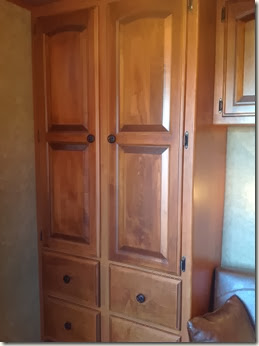 Check out this wardrobe!  That is MY clothes closet!  It even has drawers for underwear and socks!   I can store winter clothes and summer clothes and jeans and hats….  And look how pretty it is! 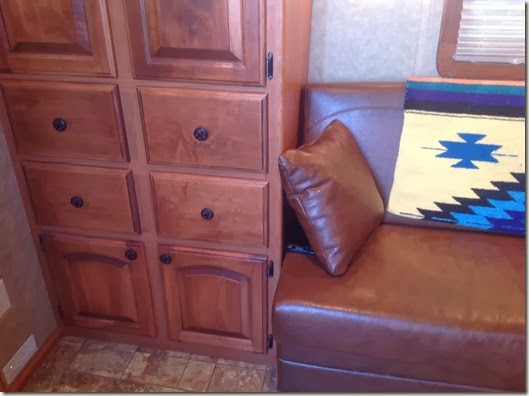 And see that bottom cupboard on the right?  That is where John can store his big boots!  I will never have to fall over them again.  My 4 pair of boots will fit in the left side of that cupboard quite nicely. 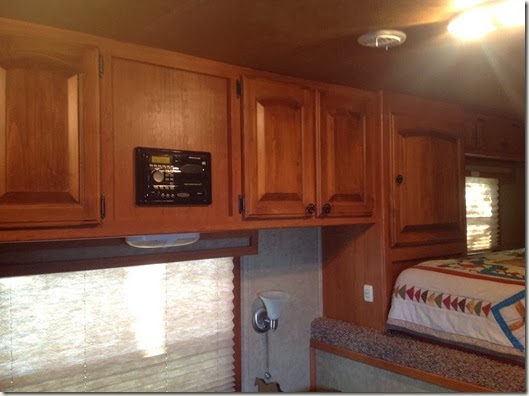 There is more storage above and under the couch.  It comes with a nice stereo with a CD player and inside and outside speakers.  In the ceiling you will notice a vent.  The heat and air conditioning are vented throughout the trailer.  There is a thermostat on the wall.  Best of all, the furnace runs without electricity!  I will never be cold again! 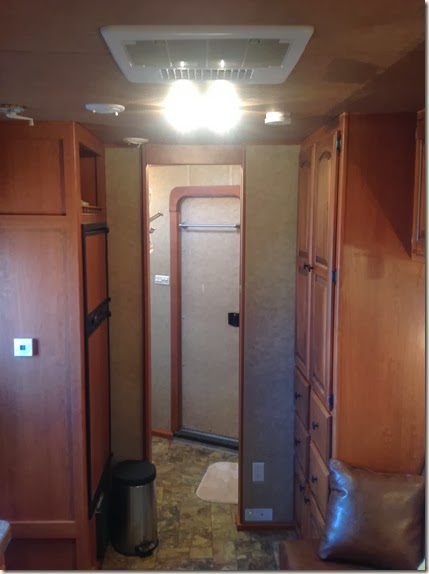 This trailer is equipped with a full bathroom and a walk-thru door to the horse area.  Actually having a porcelain toilet inside makes me wonder if I will ever need to go to the horse area from the inside again!  There is a pocket door (not shown) that closes the bathroom off from the living quarters. 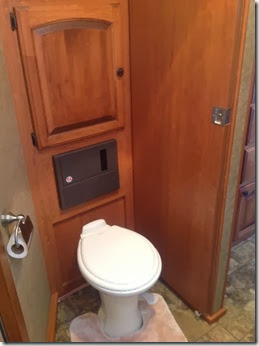 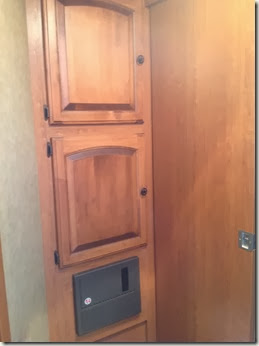 It’s hard to photograph a bathroom.  Here is the toilet.  The fuse box is behind it and then there are two cupboards above it. 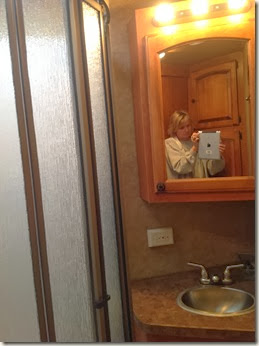 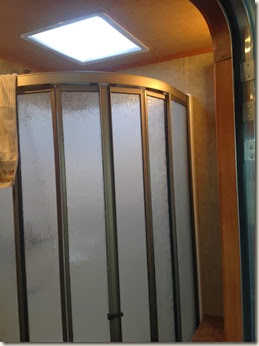 Across from the toilet are the shower and vanity.  The shower has a skylight above it and features a curved glass door.  It is very roomy.  With a gas hot water heater, it will be great to be able to clean up after a long day.  Gasp – I know – so unlike me! 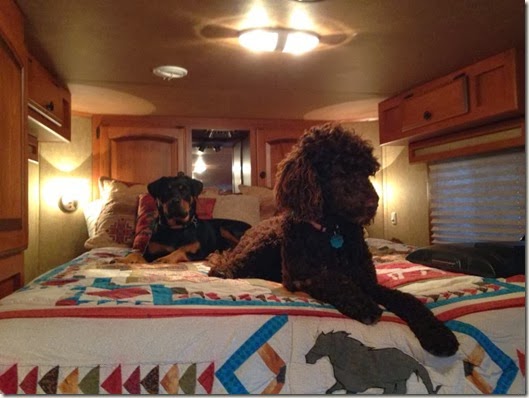 Finally, the dogs fit.  Although they both found a spot on the bed while I took these pictures, most likely when camping, Pip will be on the couch – those long poodle legs all sprawled out.  Most likely you’ll find Nahla just where she is in the picture.