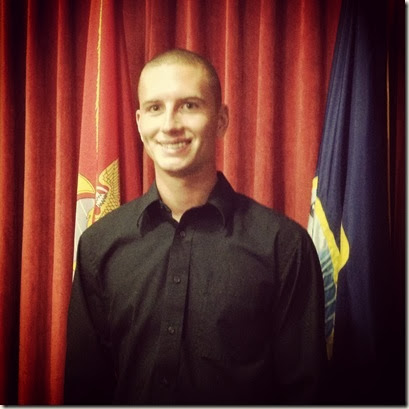 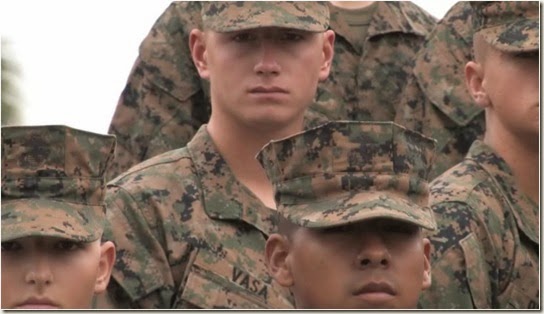 Just after I finished this blog post, the Devil Dogs video was put up which included McCain’s platoon.  We found him quickly and I captured this screen shot above.

My oldest son, McCain, has been away from home for going on 12 weeks.  This Thursday will be our first Thanksgiving without him in 20 years – all of his life.  We have never been apart this long since he was born. 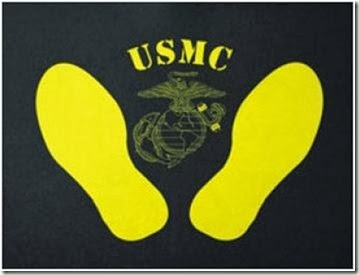 McCain is a recruit for the United States Marines.  When he went into the deferred enlistment program, I thought I had months to get prepared.  His original ship date was February 2014.  When his recruiter gave him an opportunity to leave early, he jumped on it.  He was ready.  I certainly wasn’t.

Tomorrow morning at 3:00 AM Pacific time, he begins The Crucible.  The best I can describe it is fifty-four hours of simulated combat using the skills they have learned over the past eleven weeks.


Basic Facts About the Crucible*

1. Recruits will travel 48 miles on foot.
2. There are 29 problem-solving exercises.
3. The Crucible consists of 36 stations.
4. Recruits get 3 MREs during the 54 hours.
5. Recruits carry 45 pounds during the Crucible, in addition to 782 gear, uniform and M16 service rifle weight.

(more info by clicking on picture)
When he decided he wanted to train to become a Marine, he never did mention the Crucible.  I don’t know if he didn’t know about it or just spared me.  But as soon as he left, I scoured the internet for every bit of information I could find.   In one of my letters to him, I mentioned concern about the Crucible.  He said he “couldn’t wait” and that this is what they have been training for these past months.

The parents, family and friends of 2nd Battalion Hotel Company has a Facebook page whose moderators have had sons go through the San Diego Depot.  They keep us informed on what the recruits are doing each week, help us make good travel decisions and answer our endless questions.  It also is a way for parents of the recruits to get to know other parents, albeit just virtually at first, but perhaps in person at graduation.  I’ve learned of so many traditions through these resources. 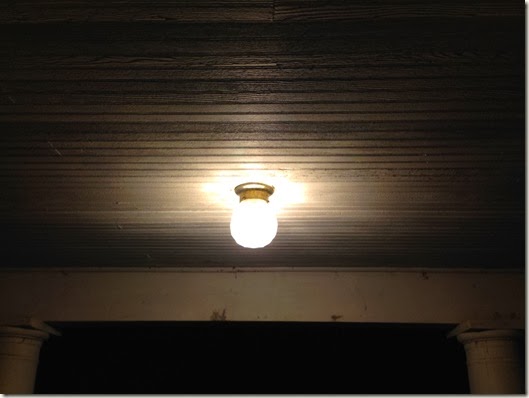 It is tradition that family and friends leave their porch lights on while their son is participating in the Crucible.  It is symbolic for guiding them home.  I’ve turned mine on now and will think of him when my alarm goes off a little after 5:00 AM this morning – 3:00 AM his time and the start of what will most likely be the toughest test he will ever take. 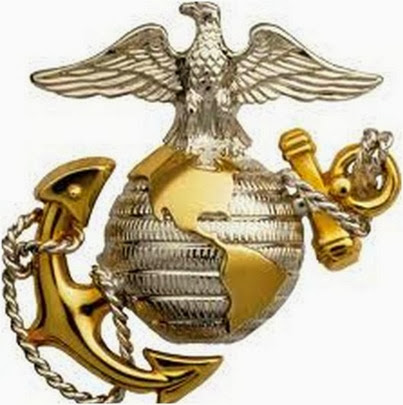 At 7:30 AM on Wednesday, at the completion of the Crucible, he and the members of his company and platoon will receive their Eagle, Globe and Anchor and most importantly, be given the title “Marine”.  They’ve had their eye on that prize.  That is their golden ticket, their reward for the 12 weeks of hell they have endured.

If you are so inclined, say a little prayer for McCain and flip your porch light on.

*If you are interested, here is the schedule we were given for the Crucible.

Reveille (2 am)
Night movement (3 am)
Recruits conduct a 6-mile hike to the Crucible site.
Events 1-3 (5: 30 am - 6:30 pm)
Event 1 – Battle of Hue City
A one-hour event in which the teams resupply water, ammunition and MREs through a course which consists of trenches, wire fences and walls.
After the resupply course, teams negotiate the warrior stations below:
Pfc Jenkins Pinnacle: Teams cross two horizontal cable-supported logs.
Pfc Garcia's Engagement: Individuals demonstrate their knowledge of hand-to-hand combat skills, and then participate in a warrior case study of Pfc. Garcia.
Lehew's Challenge: Teams of two climb over an eight-foot high horizontal log.
Corbin's Convoy: Teams react to a simulated IED while on patrol.
Event 2 – Battle of Belleau Wood: Pugil Sticks/Body Sparring
Leadership Reaction Course: A three-hour event in which the teams perform six reaction course problems which test their ability to work as a team to solve problems. Some of the problems include:
Once completing the events, the teams of two face off in a pugil stick bout.
Event 3 – Core Event and Warrior Stations
A one-hour event which can hold a maximum of six teams working concurrently.
Noonan's Casualty Evacuation: The team will recover a downed pilot and another recruit “shot” by a sniper and transport them over a mile of wooded terrain.
Enhanced Obstacle Course:  Recruits carry a dummy casualty on a stretcher and ammunition cans from one end of a standard Marine Corps obstacle course to the other, going over all obstacles.
Marine Corps Martial Arts Program (MCMAP) Strikes Station: Recruits are required to demonstrate and conduct five-minute MCMAP strikes.
Core Values Station:  Recruits sit inside a hut and receive information on a particular core value from their drill instructor.

Reveille (4 am)
Events 4-6 (5:30 am - 6:30 pm)
Event 4 – Battle of Fallujah
A one-hour event in which teams resupply water, ammunition and MREs through the Combat Assault Course.
Following the completion of the Battle of Fallujah, recruits negotiate a bayonet assault course and the warrior stations below:
Perez's Passage: Teams cross a “contaminated area” by swinging on ropes from “safe spot” to “safe spot.”
Kraft's Struggle: Teams climb a 10-foot wall and climb down the opposite side by a knotted rope.
John Quick Trail (Navigation Station): Basic map reading and grid coordinate plotting will be reviewed and evaluated.
Core Values Station: Recruits sit inside a hut and receive information on a particular core value from their drill instructor.

Combat Endurance Course: Teams have two hours to complete five events of a modified Confidence Course.
The Sky Scraper: The team retrieves a “wounded” dummy from the top of an 18-foot tower.
Stairway to Heaven: Team members move two ammunition cans over the top of a 36-foot ladder obstacle.
Two-Line Bridge: Team members cross two 52-foot long ropes with their hands and feet suspended two feet and 10 feet off the ground as they carry ammunition cans and water re-supply cans.
The Weaver: Team members climb over and under 24 logs, 42 feet in length ascending to 14 feet as they carry ammunition and water re-supply cans.
In addition to the Enhanced Confidence Course, teams go through a Combat Endurance Course.
Combat Endurance Course:  Teams conduct a simulated patrol, negotiate the obstacles and report the number and types of obstacles to intelligence sources.
Event 6 – Battle of Khe Sanh (Unknown Distance Firing)
Teams of four fire two magazines of five rounds each from simulated building structures at unknown distance targets in a time limit of 70 seconds. The number of targets hit and number of unused ammunition is then recorded.
Following Day's Defense, team members participate in a 250-meter casualty evacuation where members remove simulated casualties from a simulated danger area consisting of artillery simulators.
Night Event (8 pm - 11 pm)- Night Infiltration Course
Teams re-supply water, ammunition and MREs at night in a simulated combat environment. The teams take their ammunition cans, water cans and simulated MREs through the Combat Assault Course with the added obstacle of darkness.
Sleep (midnight - 4 am)
Day 3 – Wednesday
Reveille (3 am)
Nine-mile hike (4 am - 7 am)
Recruits conduct a nine-mile hike from the Crucible site back to the battalion.
Eagle Globe and Anchor Ceremony (7:30-8:00)
New Marines will receive an Eagle Globe and Anchor from their Drill Instructor marking their transition from a recruit to a Marine.
Warrior's Breakfast
The new MARINES are treated to a breakfast fit for only true warriors. It consists of all-you-can-eat steak, eggs and potatoes.