Last spring, we were riding at Two Rivers.  I remember passing a low branch along the trail and trying to push it back with my hand but it wouldn’t budge.  Shortly after I passed it, I heard a commotion and a riderless horse passed me by.  His rider, Lori, did the same thing I did – attempted to push the branch off the trail and instead, it pushed her off her horse.  More injury to pride than anything and a good story to tell.

Fast forward to Thanksgiving weekend and riding the same trail with different friends.  I called out Lori’s “Tree of Death” as we passed it coming from the other direction.  A bit later, we were trotting through the forest in the same direction as when it took its first victim – I called out to those behind me to '”watch out for that tree” and sure enough, I am passed once again by a riderless horse.  This time it claimed Shari as its victim resulting in seventeen stitches in her thigh.

Now you would have thought we would have taken care of that trail hazard when it claimed its first victim.  While most of us carry a nipper with us, this branch was saw-worthy.  In both instances, none of us had a big enough saw and it kind of went under the heading, “out of sight, out of mind” until the next time we rode that trail.

So the Big Fat Lying Weatherman promised a few days of unseasonably warm temperatures and a posse was formed.  That dead tree was coming down. 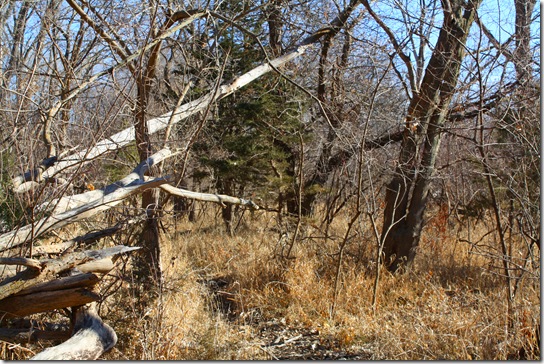 As we turned the corner and laid eyes on the widower-maker, Lori gasped something like, “I remembered it bigger!” 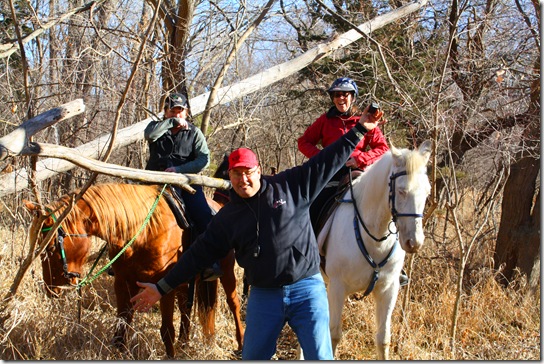 Then Mike, who was carrying the handsaw, came around the corner, he got a funny look on his face.  “Is that it?”  I guess he expected it THIS big! 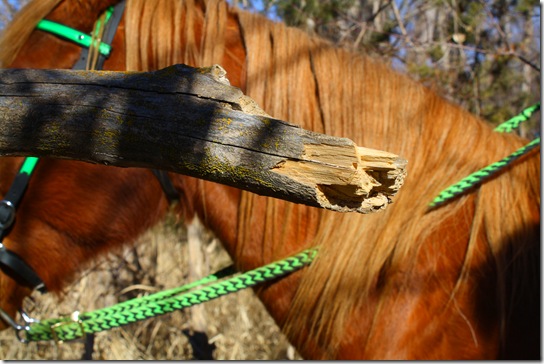 Well, no one said it had to be big to be deadly.  Look at those monkeys on Wizard of Oz.  They aren’t small but scary as hell. 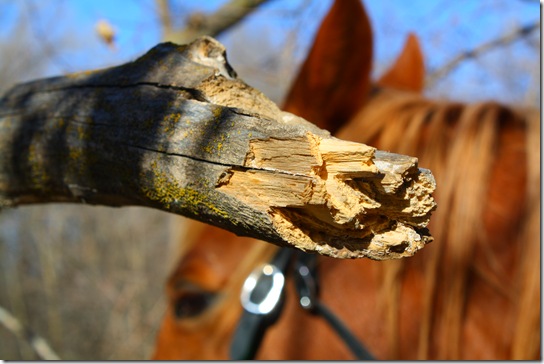 This branch was the “pitbull” of the forest! 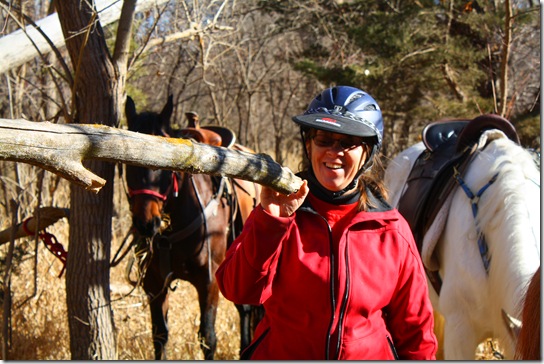 And if a forensic scientist looked closely, they could probably still find tissue from Lori’s palm and Shari’s thigh.

It was time to take it down!  Make sure and wait for the replay! 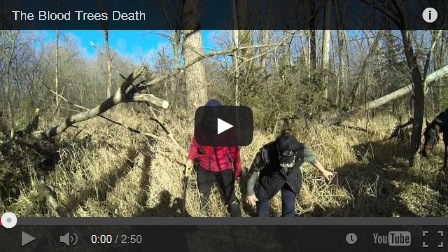 This is what we did on what was most likely the last nice day in Nebraska in 2013.