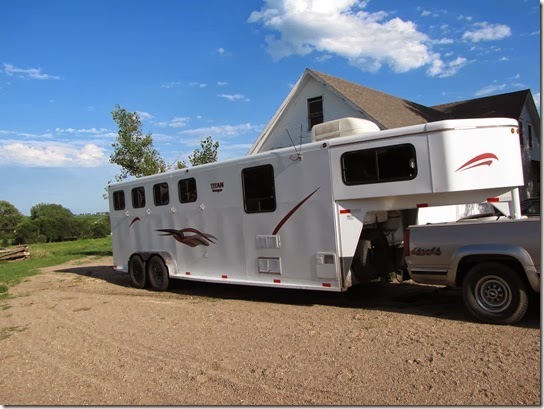 I remember when I first started horse camping.  We had a three horse Travelong stock trailer.  We filled the dressing room with camping supplies:  coolers, sleeping bags, tables, chairs as well as all of our tack.  We didn’t even think to sleep in the gooseneck.  We popped a tent and slept miserably on the ground.  I started looking to upgrade the trailer immediately thereafter.  We soon found a 4 horse Titan with a small weekender living quarters. I was in love!  I asked my mom to bring me a sewing machine and I spent Thanksgiving weekend that year making cushions for the trailer.  The bench folded down to another bed so John, the boys and I slept comfortably.  It had a sink, shower and refrigerator.  Just a 6’ short wall so not a lot of room but I was in high Heaven!   When the boys got bigger, we would clean out the back of the trailer and set up cots for them; really helped spreading out. 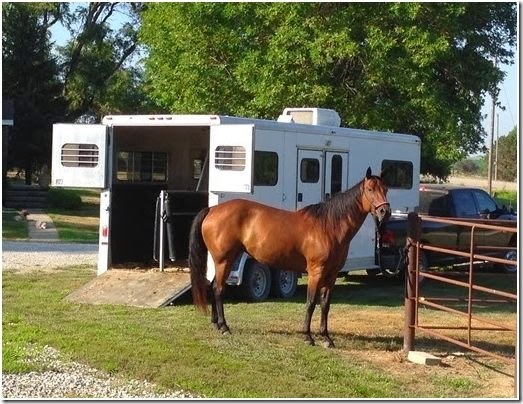 As the years went on, so did the problems with our truck.  It seemed like every major vacation, we would have breakdowns.  From catching fire at Big Canyon to driving across the state with no turbo; it was endless.  After a trip to Wyoming which once again proved too much for the truck and it seemed for John and the kids, I decided to downsize trailers.  If the boys weren’t interested in riding with me anymore, I would take a smaller rig and do it alone.  I sold my trailer a couple days after listing it on Craigslist and bought a two-horses Sundowner. 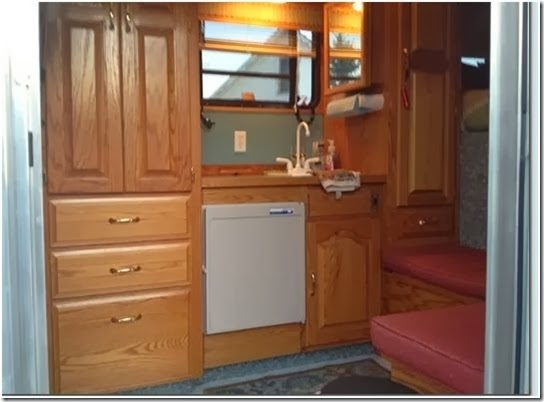 I love love loved this trailer!  It was so handy and clean and new and just right for one person.  But it wasn’t always “just me”.  Although the boys pretty much quit riding with us, John was still game for the camping trips and let me tell you, I got really tired of falling over his boots.

Our camping trips started going longer into the fall and if we didn’t have electricity, it was cold.  Not only in the trailer itself, but in my makeshift bathroom in the stock part of the trailer.  I longed for a furnace and a bathroom… and more room for John’s boots!

Having owned 3 gooseneck trailers, I started a list of those things that I wanted in a trailer.  If the trailer did not have these first few items, it was a deal breaker.

These items were must haves and why.

Air Conditioning:  Doesn’t it just grate on your nerves when people see your horse trailer or camper and say “That’s not camping” and go on to tell you that “real” camping is sleeping in a tent in the woods!  Well, I have the best comeback for that.  I tell them we aren’t campers, we are trail riders and when we get back from the woods, we like our creature comforts.  Unfortunately, many campgrounds in Nebraska do not provide power to the horse camps.  So I would say that I most often cannot use the air conditioner.  But let me tell you, when there is an opportunity to have it turned on – if nothing else but to take the humidity out, it is a very nice luxury.  And a must have for resale. 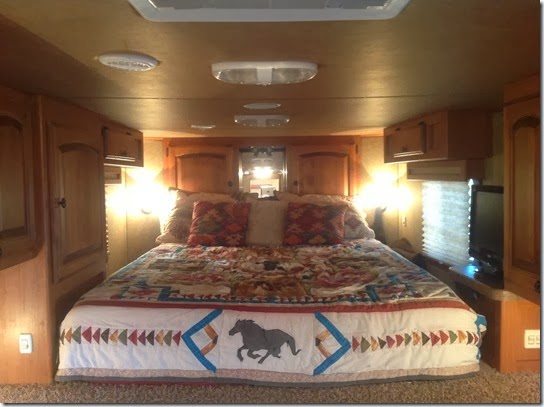 Furnace:  It might surprise you that I was more interested in buying a trailer with a propane furnace than air conditioning.  We had a camping trip planned in early April of this past year and while I was looking forward to the trip, I was concerned about having to rely only on a space heater overnight which would not warm up the area where my Luggable Loo is stored.  And those chilly mornings in the fall when I would desperately be lighting a Mr. Buddy heater and then jump back under the covers until the chill was gone from the trailer and I could think about making coffee.  A few of my friends have a furnace in their trailer and I longed for one.  And now I have one.  I’ll never be cold again! 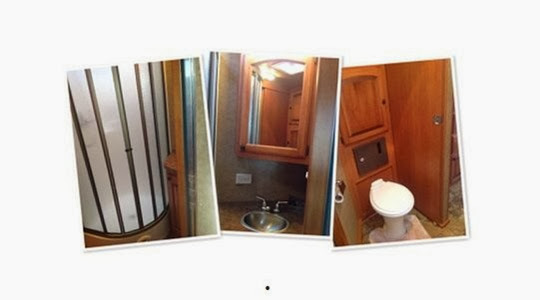 Bathroom with Toilet & Shower with Water Heater:  As mentioned above, the Luggable Loo just wasn’t cutting it anymore.  And I would watch other horsewomen come out of their trailers with wet hair, looking refreshed after a hot shower.  For years, I just didn’t take a shower when camping.  Or I would leave a solar bag of water on the hood of my truck and rig it up in the back of the trailer for a quick rinse.  If I was upgrading, a bathroom was a must have.  I am a bit intimidated by the black and gray tanks and the whole sewer system but we’ll figure it out and I am sure it will be fine. 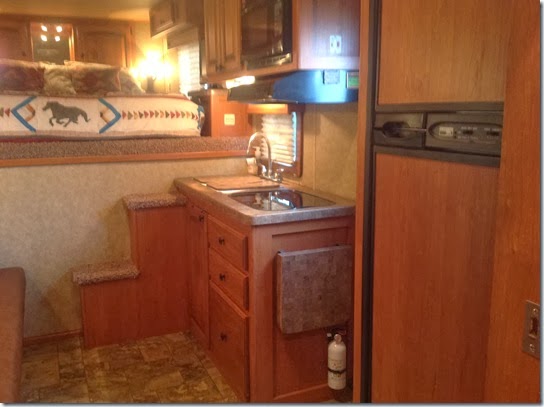 Refrigerator:  I had a refrigerator installed in my Titan and I loved it.  It really reduced the amount of ice and coolers we had to haul.  When I bought my Sundowner, I decided to try it a season without a refrigerator but I didn’t last a month before I took it in to have one installed.  A two or three way frig was a must so it could run on propane when there was no power available.  While I felt I could get by with a 3 cubic foot (under the counter type) frig, I really wanted a trailer with large (6 cu. ft) with a  freezer.  When shopping, it did not seem they were widely available in trailers with less than a 10’ short wall.  Probably just not enough floor space perhaps.

While I was really excited we were able to get a large refrigerator, I didn’t think about what side of the trailer it should be on.  While it probably wouldn’t have been a deal-breaker for me, the ideal would be to have your refrigerator on the other side of your trailer as the awning or area you are most likely to be sitting.  They do have exhaust vents which could be bothersome outside.  Lesson learned. 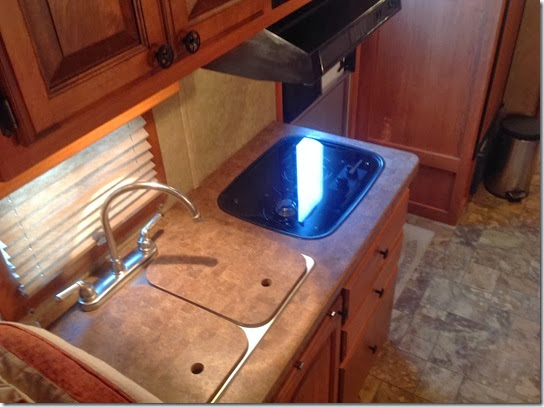 Stovetop & Microwave:  Once again, when camping without power, I have to rely on propane for that morning coffee because going without is not an option.  Rather than having to pack and unpack a portable burner, I wanted this new trailer to have a stovetop.  And I preferred it to be flush with the counter so things could be placed on it when not in use.  I probably saw more without a flush counter than those with, but did luck out that my new trailer had a flat top.  I did buy a mat to place over the glass when not in use.

All of my trailers had a microwave oven.  I use them like I use them at home.  Heating things up, warming up leftovers, thawing frozen food, etc.  I was hoping to find one with a convection microwave which I understand works more like an oven.  It would have been a nice to have, but not a deal breaker. 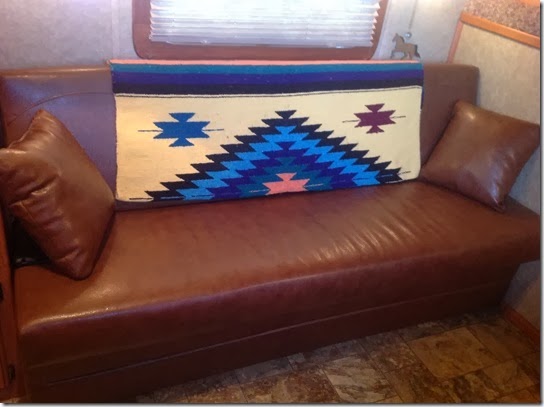 Couch or Dinette:  Some people have a strong preference one way or another.  If I was custom ordering my trailer, I think my preference would be dinette as I can envision myself with my coffee and Ipad in the morning.  But I could equally see myself napping on a couch with the air conditioner running.  So I could go either way.  The trailer I found had a couch.  I love that my Navajo blanket seems made for this couch! 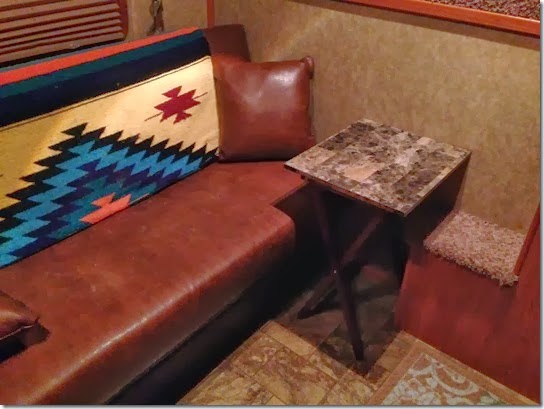 Under the couch is a fold-up table that is the length of the couch and can be set up when needed.  I tried it and it really takes up too much space.  But I do need something for that morning ritual.  When walking through ShopKo a few weeks ago, I found some tv trays that, while they are not a direct match, compliments the trailer décor.  At 1/2 price, I snatched them up.  They will do for now. 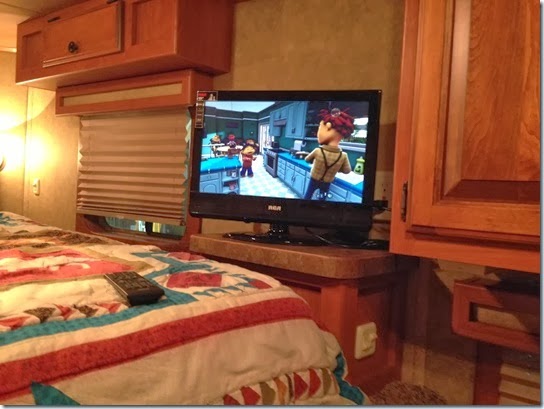 Years ago, I bought a flat screen television and DVD player for our Sundowner trailer.  I even bought all the hardware to have it installed.  But when I told John where I wanted it installed, he didn’t like my plan.  So it became a stand-off.  And neither one of us would give on where we would put it.  While I am pretty handy, I was not gutsy enough to drill into the trailer myself, so it was never installed.  This new trailer had all the wiring and antenna for a television.  It just needed the tv.  And look!  It works!  I still plan to hook it to a swivel base but for now, just lay it on the bed when traveling. 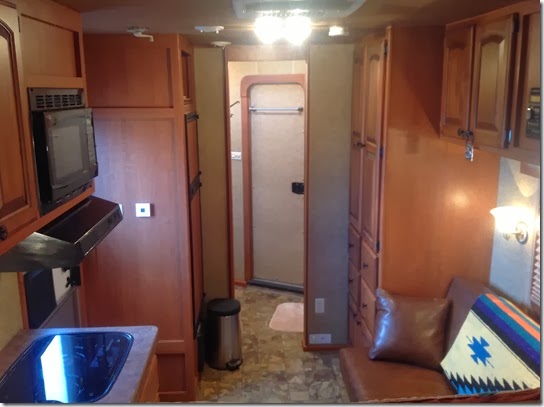 The other items on my “must have” list were as follows and I got them all except 100% aluminum. 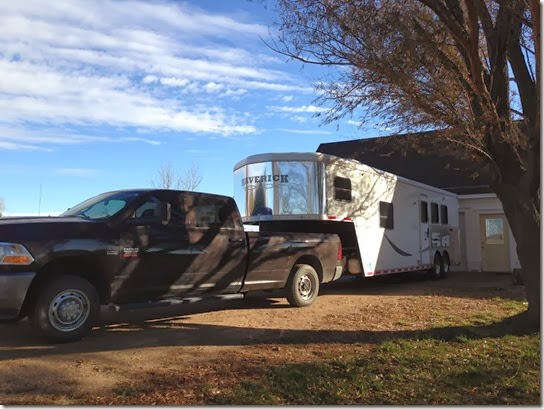 Since the trailer had everything else that I could possibly want (and more), I am satisfied with an aluminum skinned trailer.  It is stored inside and not often used in the winter.  I think we care enough for our trailers that this will not be a big deal for us.

The trailer is 8’ wide and the living quarters has an 11’ short wall, so I am right where I wanted to be.  If I am lacking anything, it is counter space but with the extra along side of the counter and the flat top stove, It should work out okay. 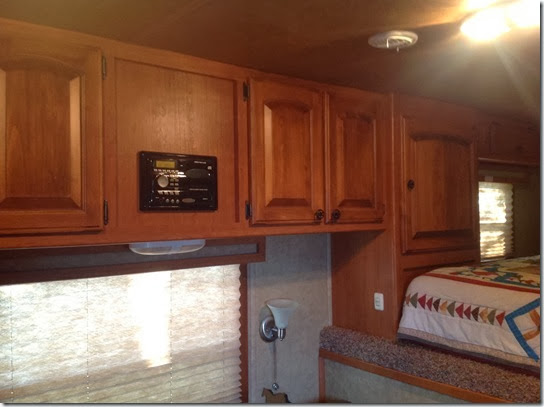 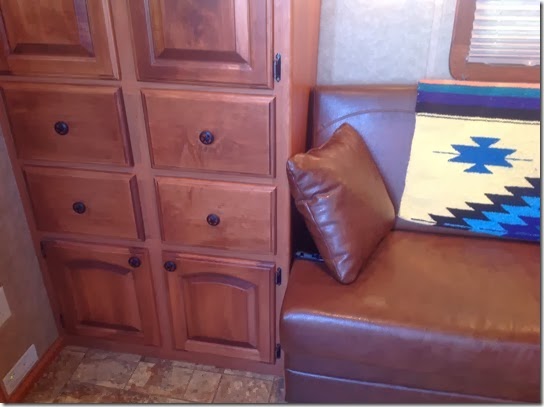 I also got the mother lode of cupboards!  Oh, my!  I have settled into the trailer nicely and still have cupboard space.  John even gets his own cupboard and there is a cupboard for his boots!  We were surprised when looking at some $100k+ trailers at Expo and their lack of cupboard space.

And did I mention that with a flip of the switch, I have a furnace?

Other items this trailer has that I didn’t really think about before is 110 outlets outside and a light under the gooseneck.  It has an outside faucet which will be handy for watering the horses.  You can also hook the water line direct to the trailer while camping so the tanks are automatically filled.  There are outside speakers and an awning.

One might ask why an awning wasn’t on my list?  I had one with my Titan and hardly ever used it.  It was a constant worry and a PITA.  We bought a portable canopy which we used much more than we ever did our awning.  This new trailer has one but I doubt it will get much use for those same reasons.   But who knows?

I hope these two posts gives you some idea of what to look for when shopping for a trailer.  I will give you one more word of advice that a friend gave to me.  Do not overspend!  Stick to your budget.  If you have to spend all the time worrying about how you are going to pay for it or have to take a loan out that will burden you for over a decade, do not do it.  We spent many happy years in our smaller trailers.  Remember, for horse people, it is about the horse.