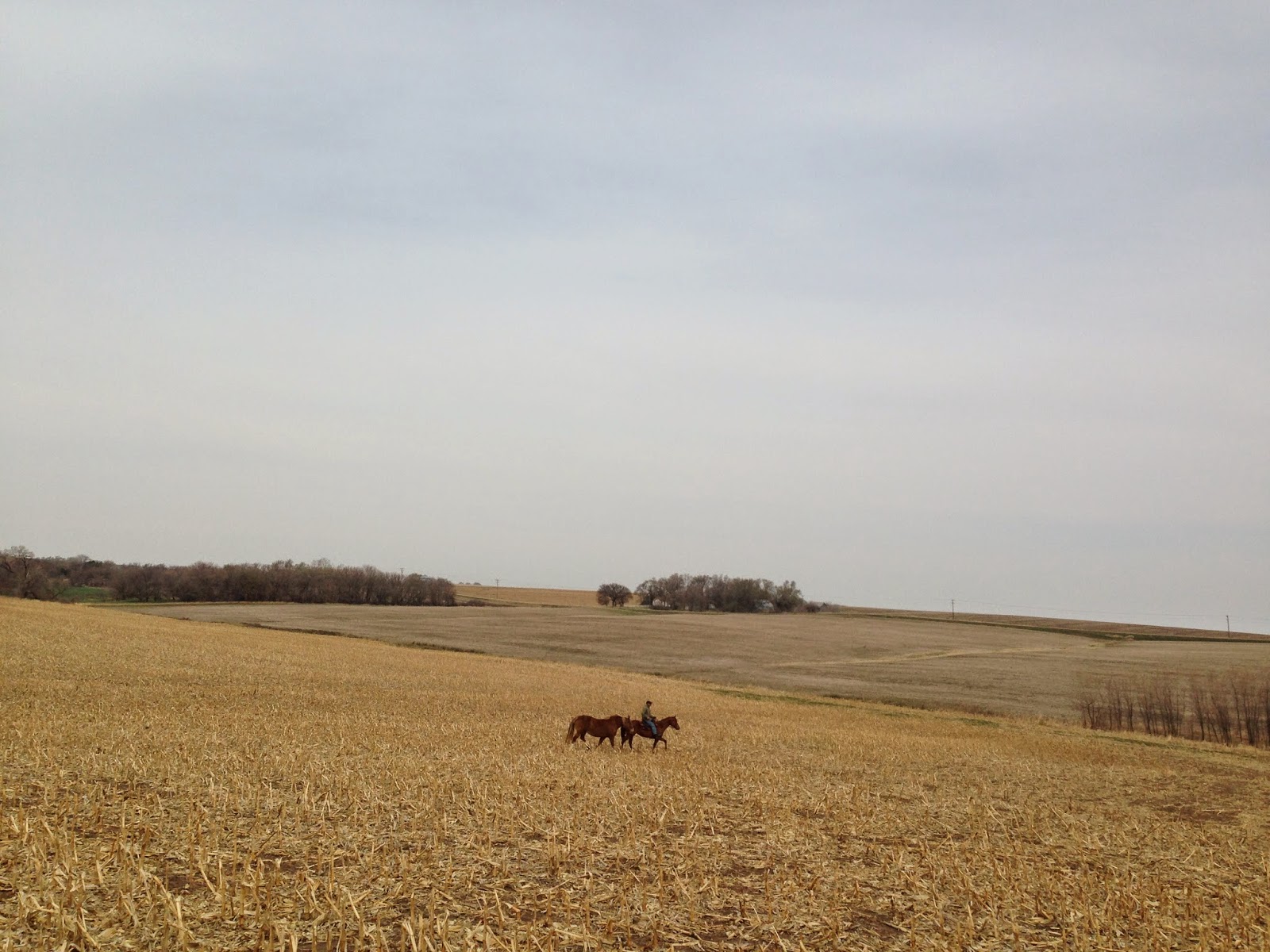 We live right up the hill from John's family home.  We bought land from his parents twenty years ago and while some would think 1/4 mile is too close to your in-laws, it has suited us well all these years. John never had to leave home really and that's how he likes it. 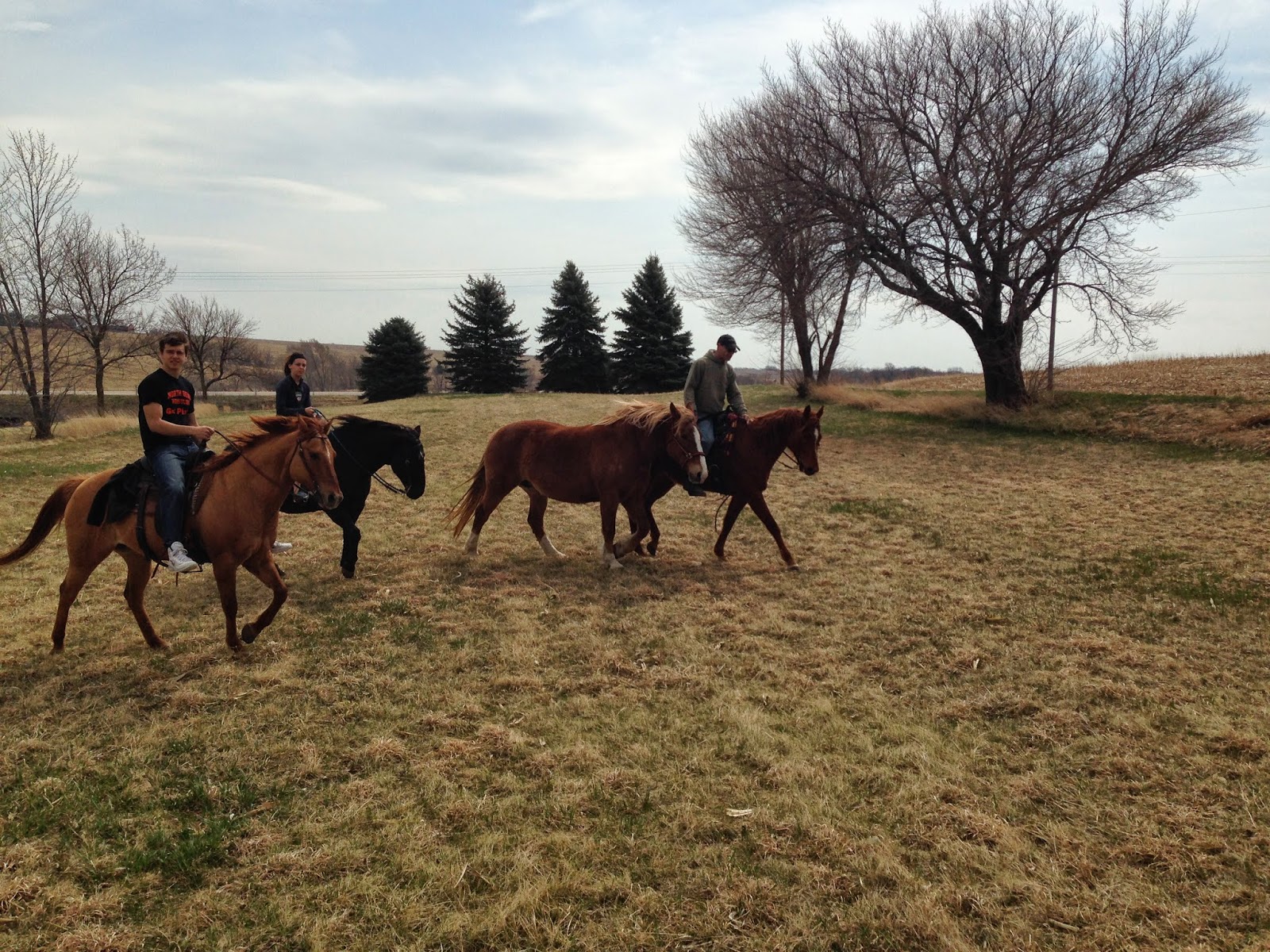 So when there are family events or holidays, the younger kids gravitate towards our place.  The boys would play video games or bounce on the trampoline but the girl cousins always wanted to see the horses.  It would take us as long to saddle them as it would to give the obligatory pony rides.  As they grew older, I would let them ride in the arena by themselves and then last year, they got to go on a real trail ride around our property without being ponied to our side. 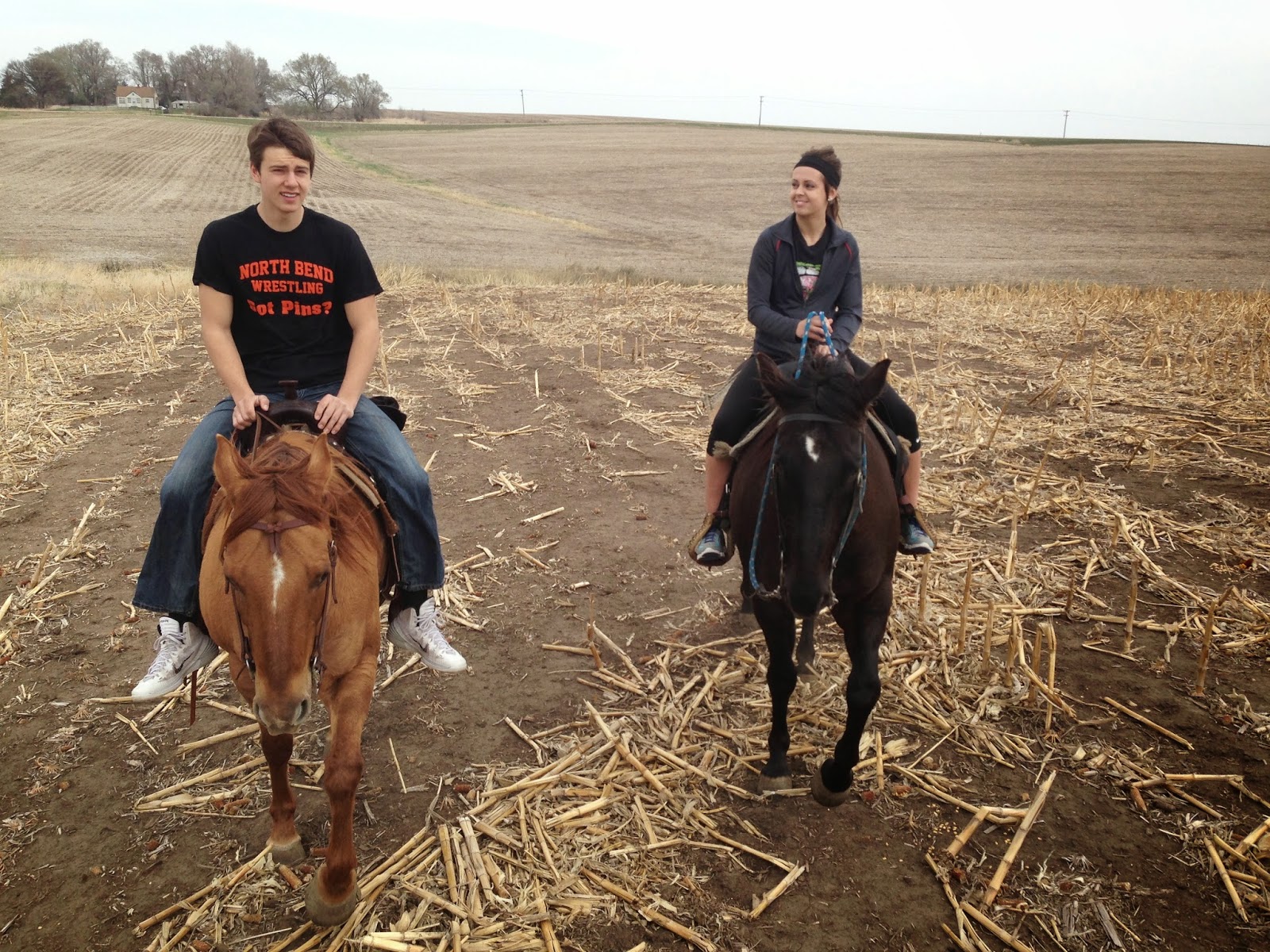 On the day before Easter, Case had his friend, Jesse, here.  I have been asking her if she wanted to ride and she did, so we planned to ride Saturday morning.  Of course the wind was blowing huge gusts but the temps were warm.  John, Case and I saddled up four horses.  We have a temporary boarder horse named Concho and Case wanted to ride him.  So John got on Butter, I was on Windy and I put Jesse on Fancy because everyone who doesn't know how to ride gets Fancy because she is the best.  We headed down the pasture and Blue and Baby were crying like bitches for being left behind.  Fancy would call back to them and Jesse would circle her back around.  We weren't on the trail for five minutes when Fancy bucked.  Yes, Fancy bucked.  Jesse lost her balance and fell off and Fancy hightailed it back to Blue's corral. 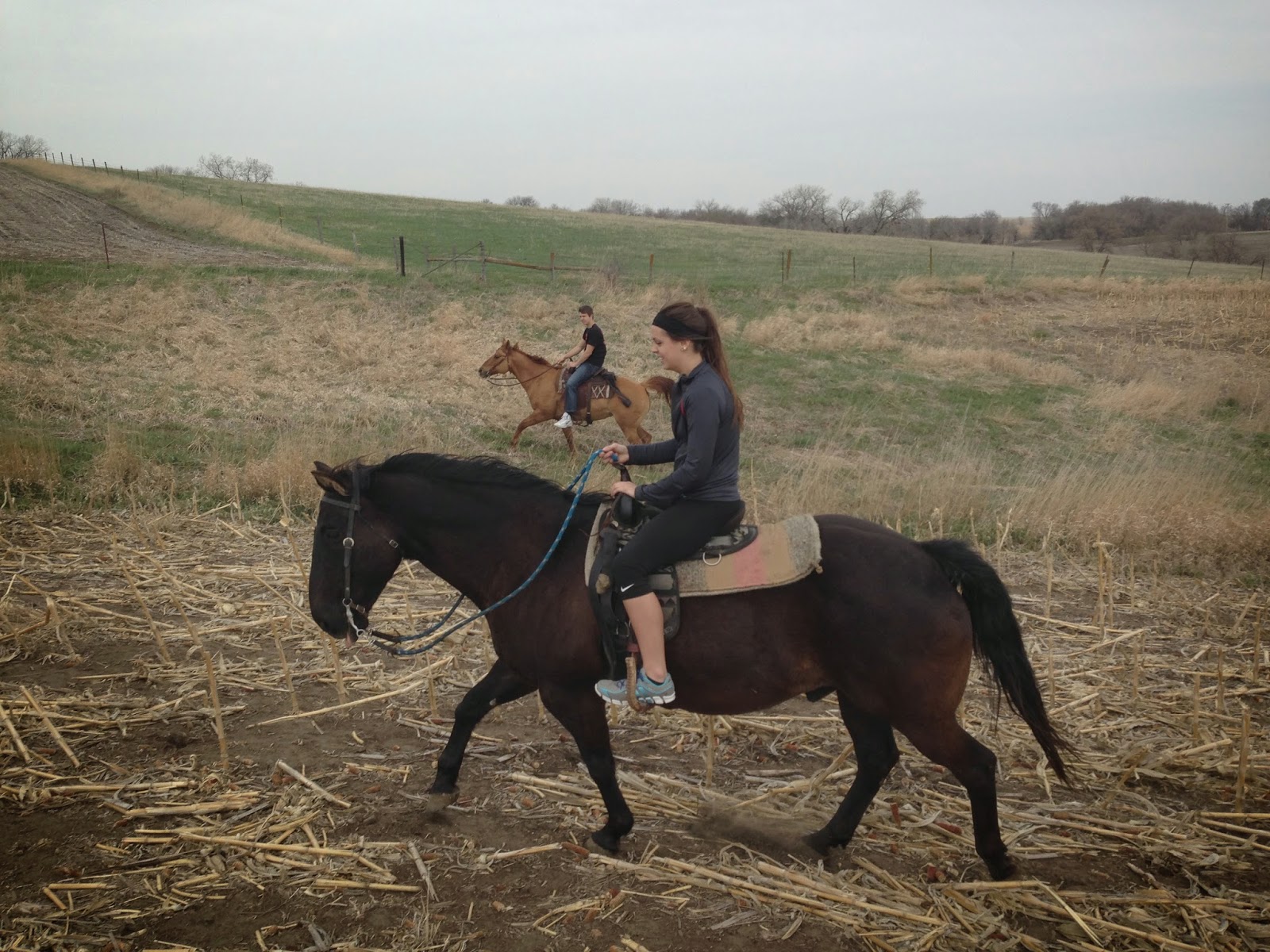 I jumped off Windy and went to Jesse.  She had sat up but then she laid back down again.  Oh my gosh!  Case finally has a girlfriend and I cripple her!  By the time I approach her, she is up and smiling.  She got the wind knocked out of her, banged her tail bone a bit but otherwise survived.  And you know what?  She still wanted to ride. 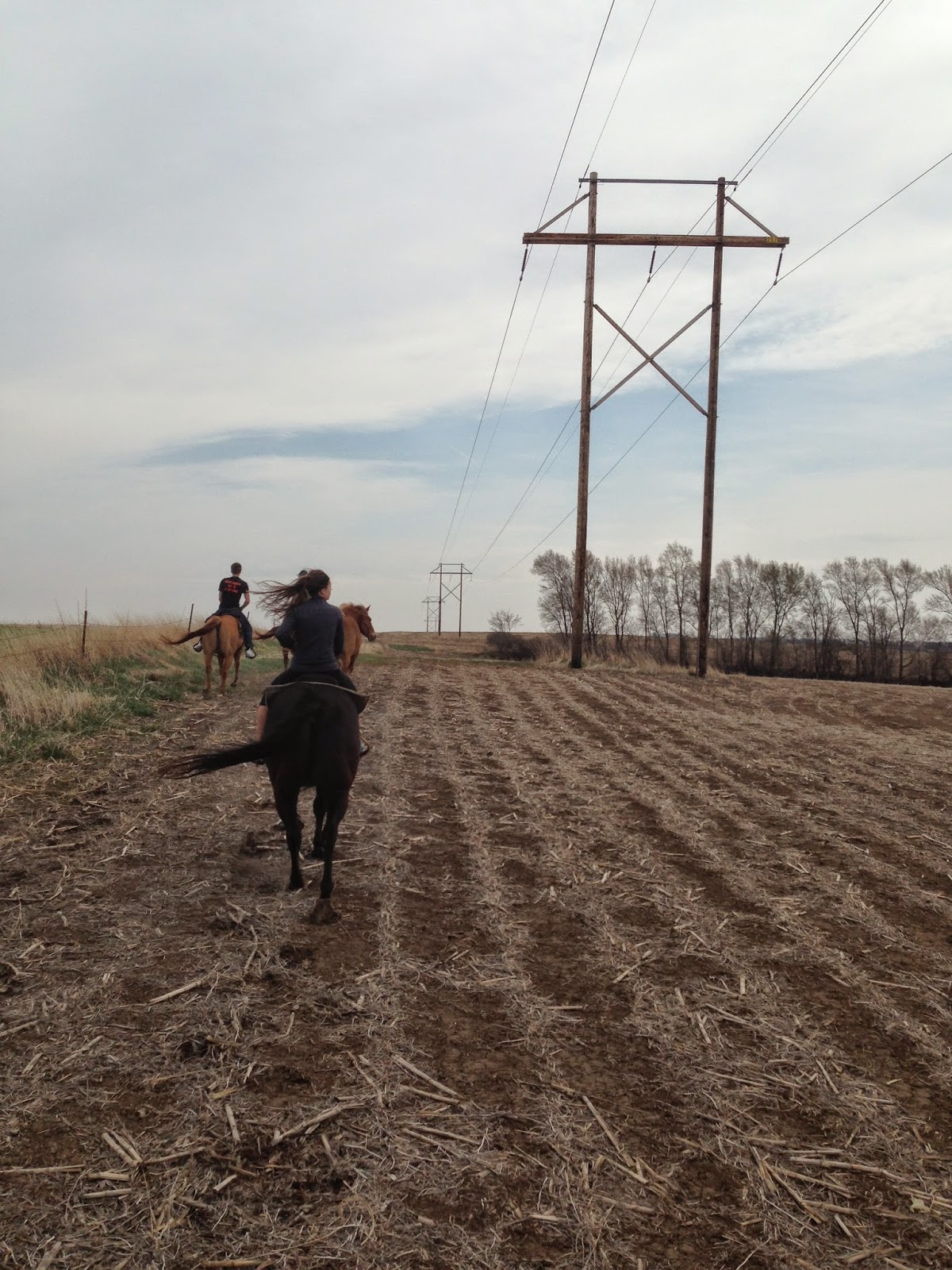 So we walked back up the hill and put the boarder horse away and pulled out Blue, our old faithful.  John got on Fancy and ponied Baby and off we went again.  We had a very nice four mile ride. 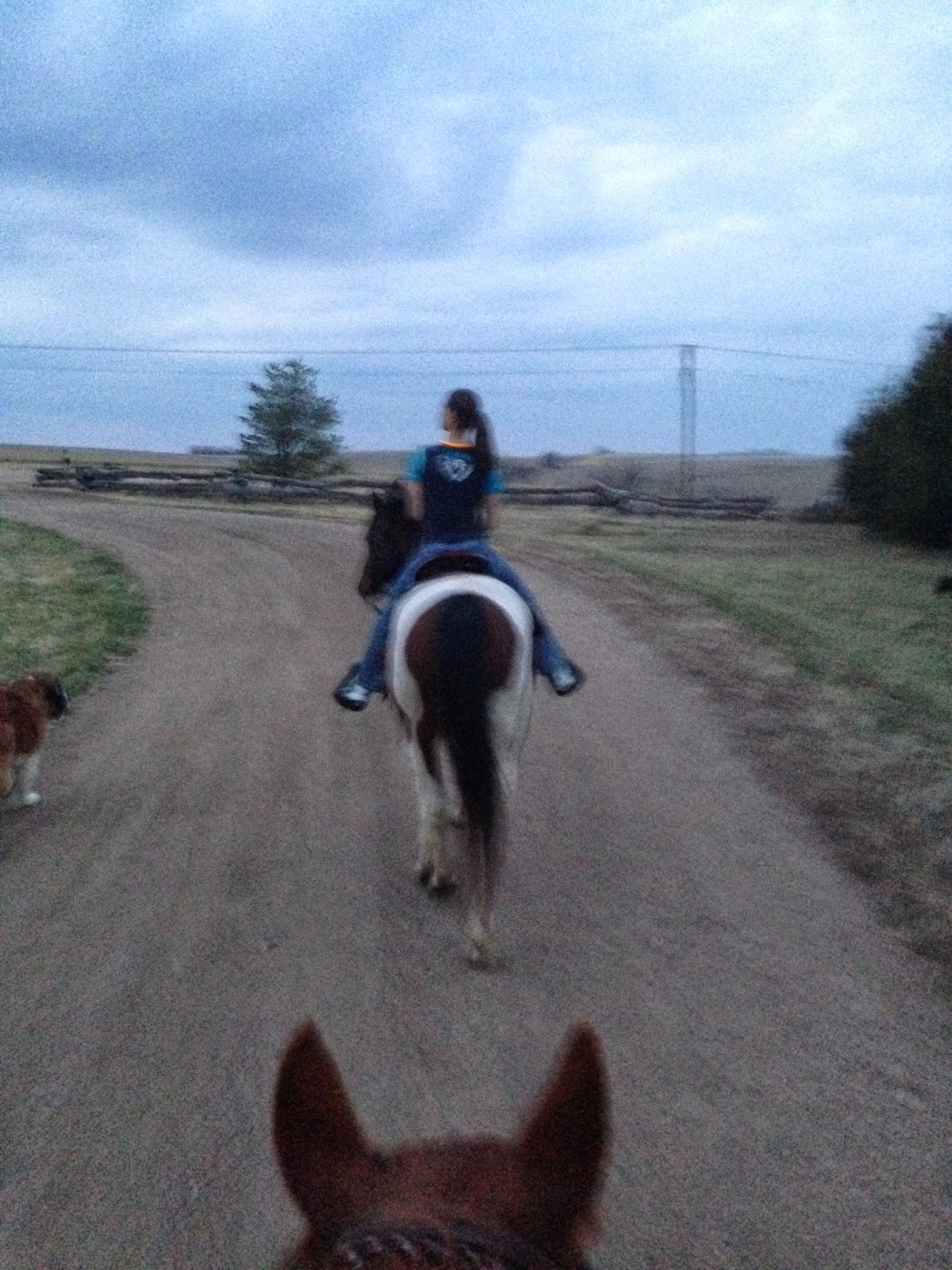 Later that evening, my sister Ann and her family came over.  After dinner and a few margaritas serving as a shot of courage for my sister, and we saddled up again.  My sister will not ride any horse but Blue and I have to pony her.   (She and Ginger parted ways a dozen years ago and her fear remains strong).  I put Jesse on Windy, niece Kelsey on Concho, Ann on Blue and Case on Butter.  I rode Fancy.  We headed out to the pasture.  It was dusk when we rode out and night time when we got back so none of the pictures turned out very well.

I was glad everyone had a good ride and we ended on a good note.