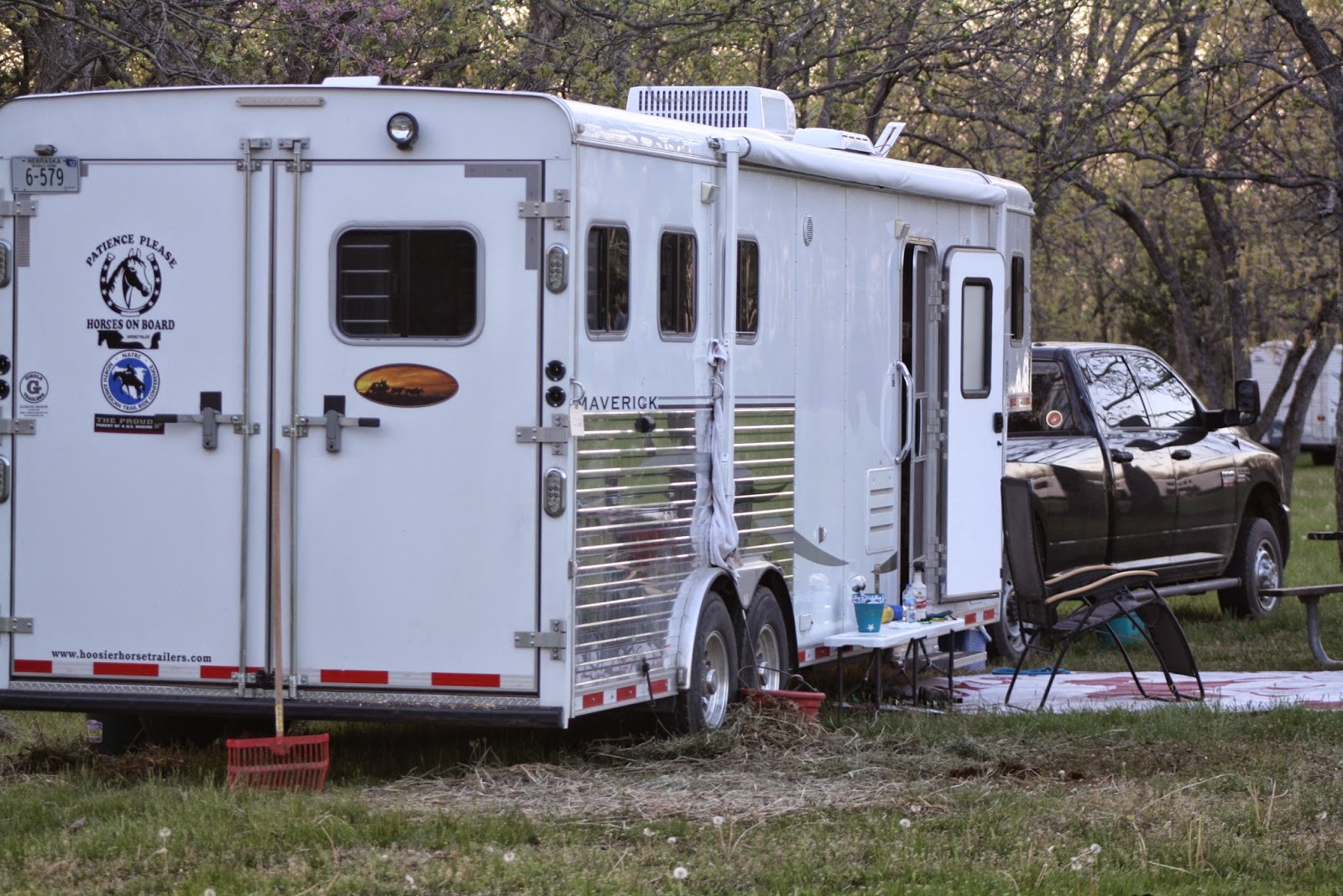 The first weekend in May was our first Competitive Trail Ride (CTR) of the season.  We drove down to Perry State Park near Topeka, Kansas for the Nickers and Neighs CTR.  We arrived about midday and set up camp. 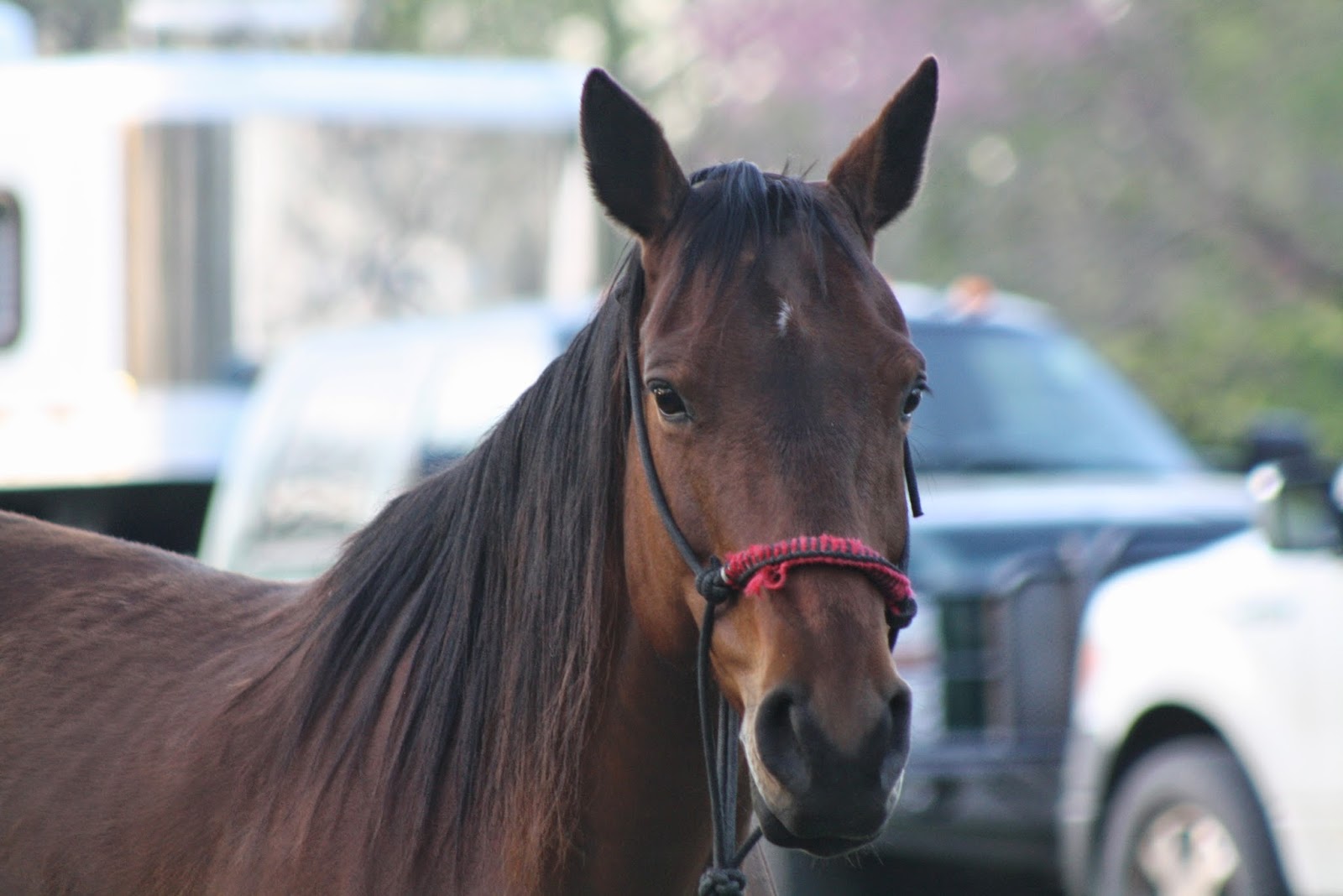 Last year, John and I switched horses - the last couple rides he completed on Windy and I rode Fancy.  Initially, that was what we planned for this year.  And then my friend Mary made a comment that its just not the same seeing me ride Fancy rather than Windy.  I rode Fancy to be more successful in competition.  If I really wanted to set the bar, riding my own horse successfully should be my goal.  Dah!  So I decided good, bad or ugly, Windy and I were in this together. 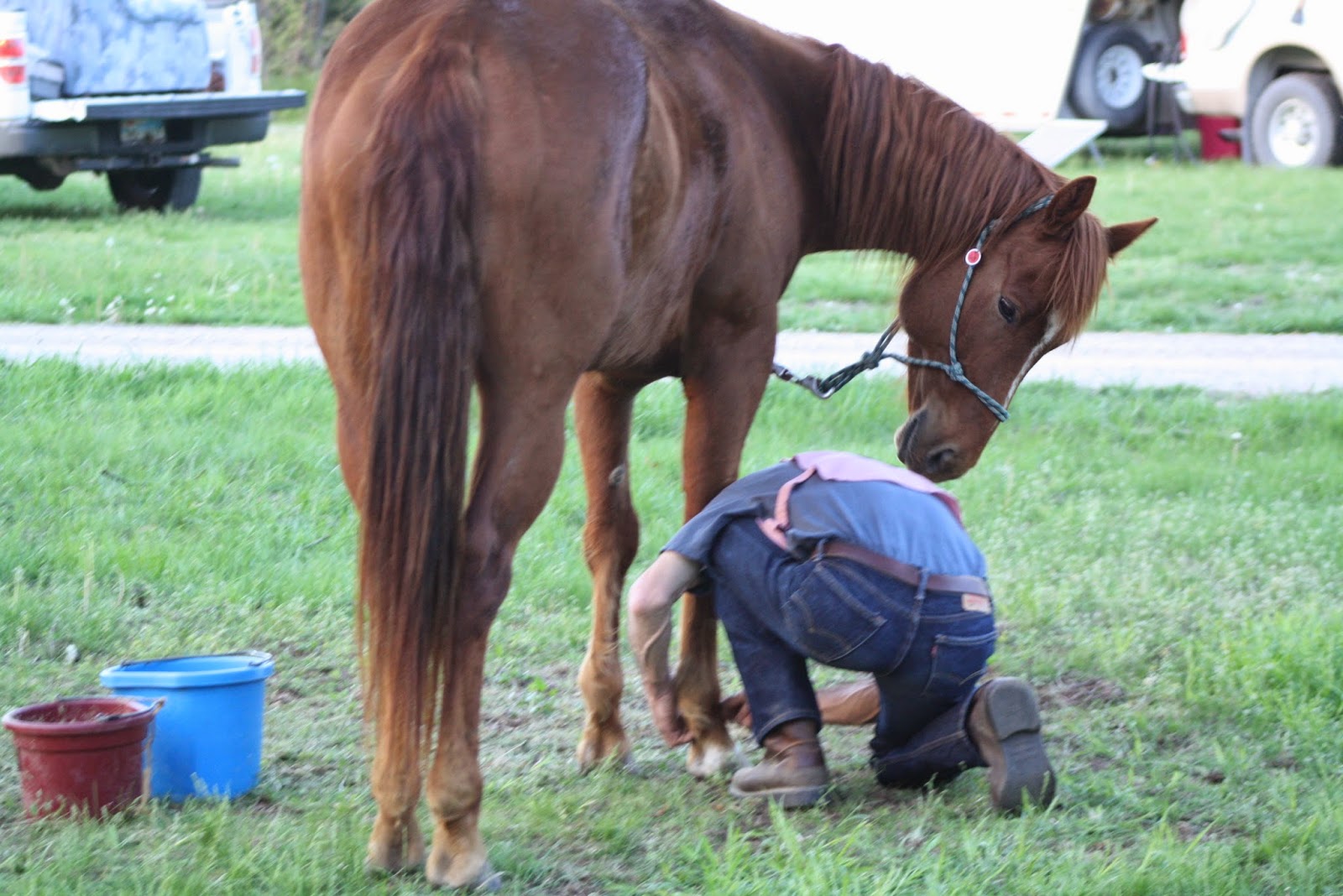 Both horses still had a lot of their winter coat.  We spent extra time grooming them to get as much off as possible - not only for a good showing for the judge but because the temperatures in Kansas were predicted to be in the high eighties - much warmer than we have had yet in Nebraska. 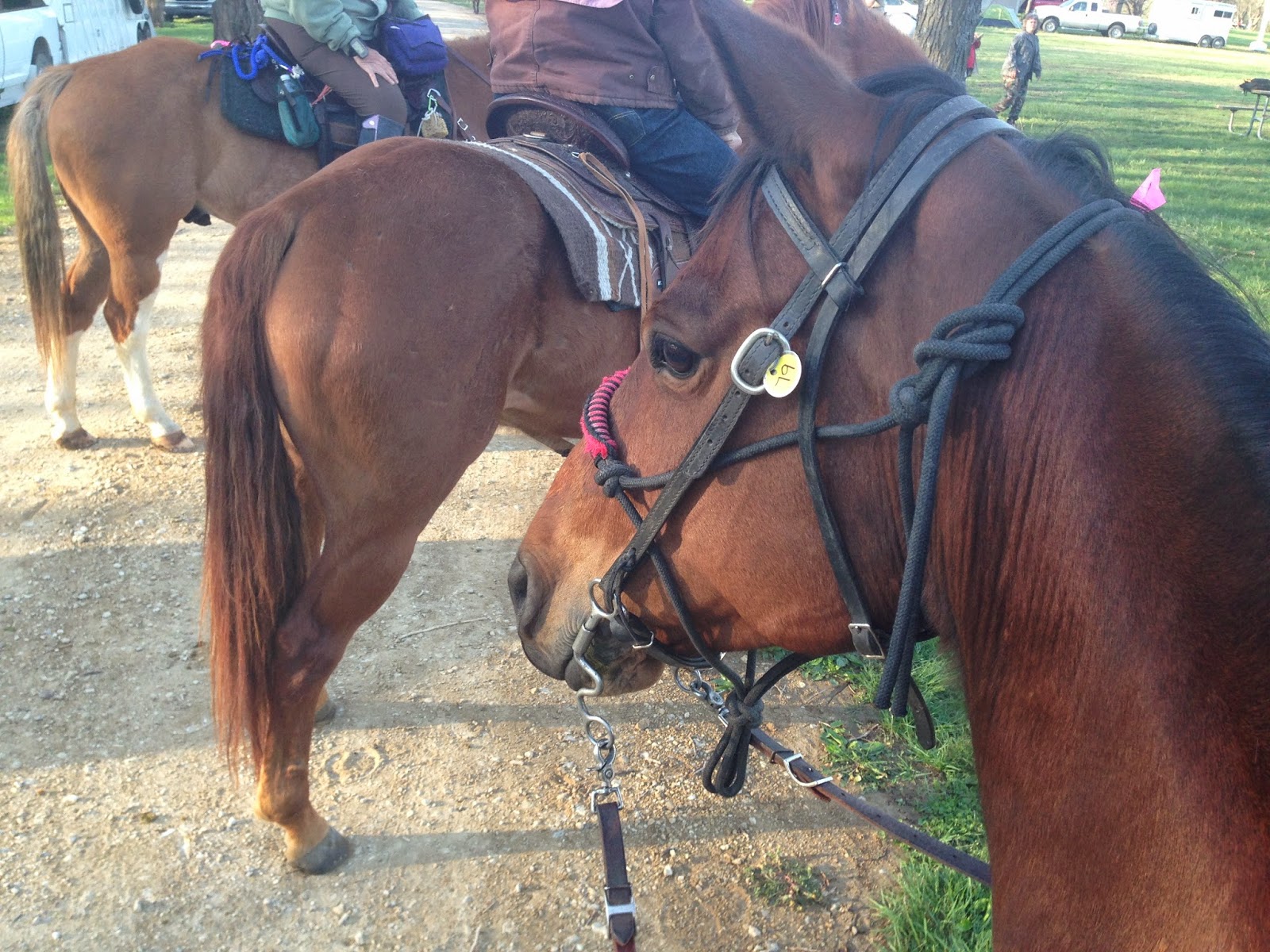 I had ridden under both the horsemanship and vet judge before; the latter rather successfully landing 2nd place in 2010, I believe.  I remembered the horsemanship judge as being tough so told John we needed to really groom well for check-in.  I got an "excellent +" for grooming but dinged for the knot in my rope halter.  It caught me a little off-guard when she said my knot was not secure.  Van Hargis taught me how to tie that knot and I've used it for every CTR judge, including this one, ever since.  I had put the halter on Fancy and John didn't get dinged for my knot!  What the heck?  In hindsight, I should have demonstrated how it was tied but instead, I took her suggestion and tied it as she recommended.  I'm hear to learn and now I know two ways to tie a knot. 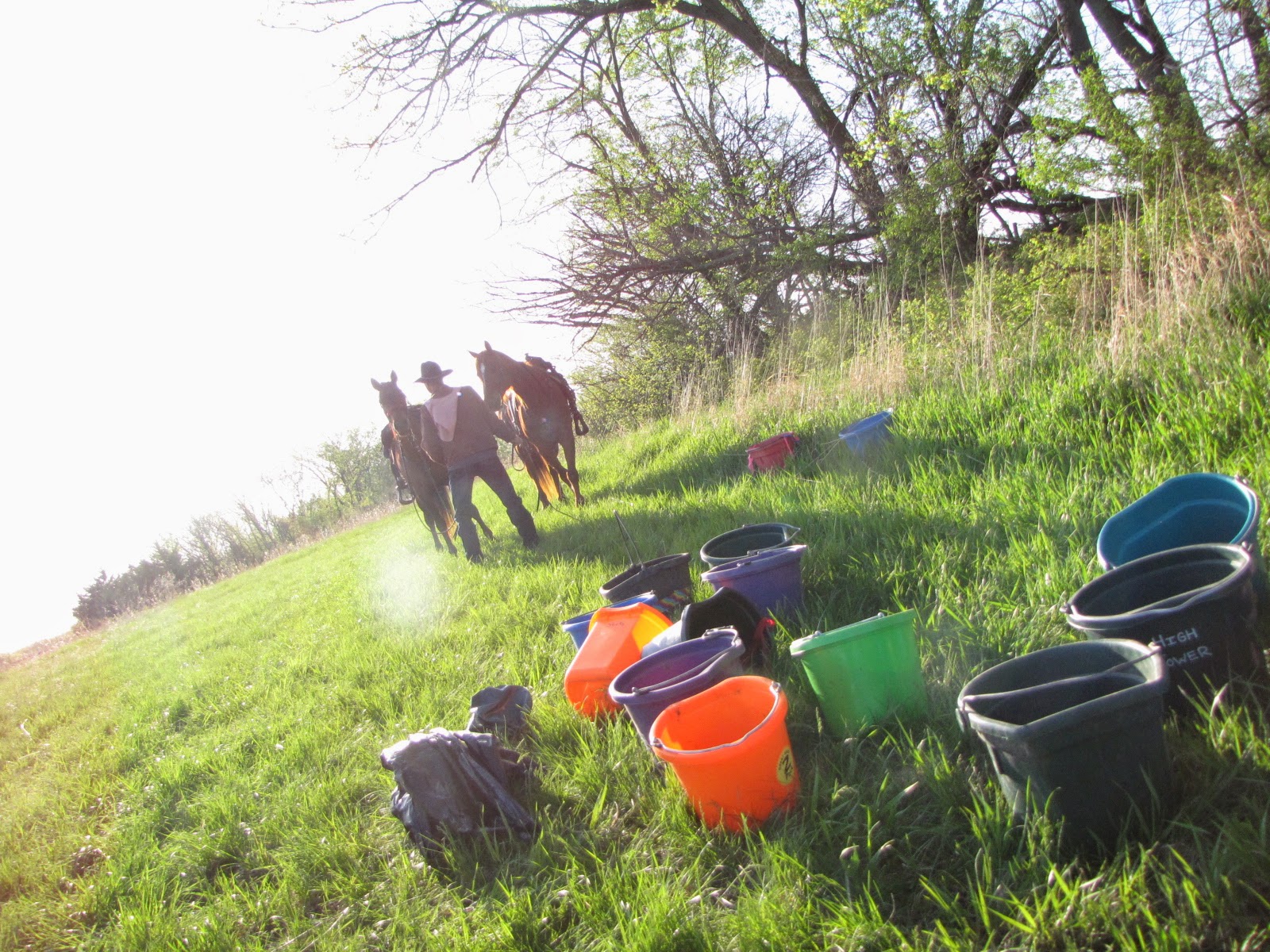 There has been news lately of the EHV-1 virus and that two horses that had recently barrel raced in Nebraska were diagnosed with this virus.  It is a dangerous virus but not a new one.  Quite frankly, those in the non-horse world seem to get more excited about it than those of us who ride.  I was happy that the ride management, however, put in place biosecurity measures to ensure our horses were kept safely from other horses.  We would lose points if the judges caught our horses sniffing noses, the vet judge changed rubber gloves before handling the next horse and we had to provide management with our own water buckets.  Our buckets could only be filled with a "dipper bucket". 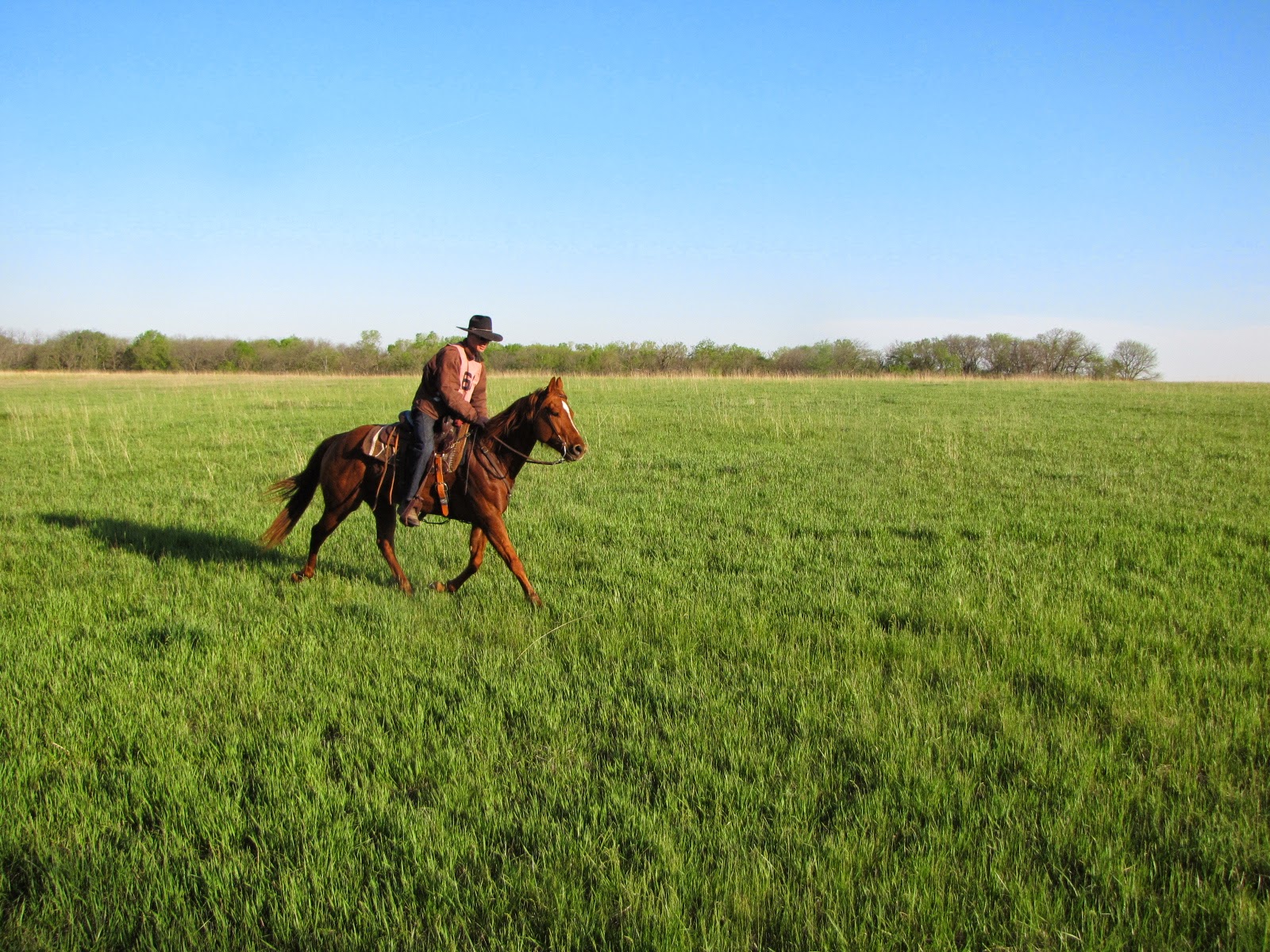 At a CTR, we are judged by a horsemanship judge on grooming, tack and equipment, trail equitation, safety and courtesy.  I knew I could turn out a pretty decently groomed horse.  My equipment passed all of the requirements before ride out Saturday morning but the obstacles usually fall under the latter categories and I usually have a hard time with those. 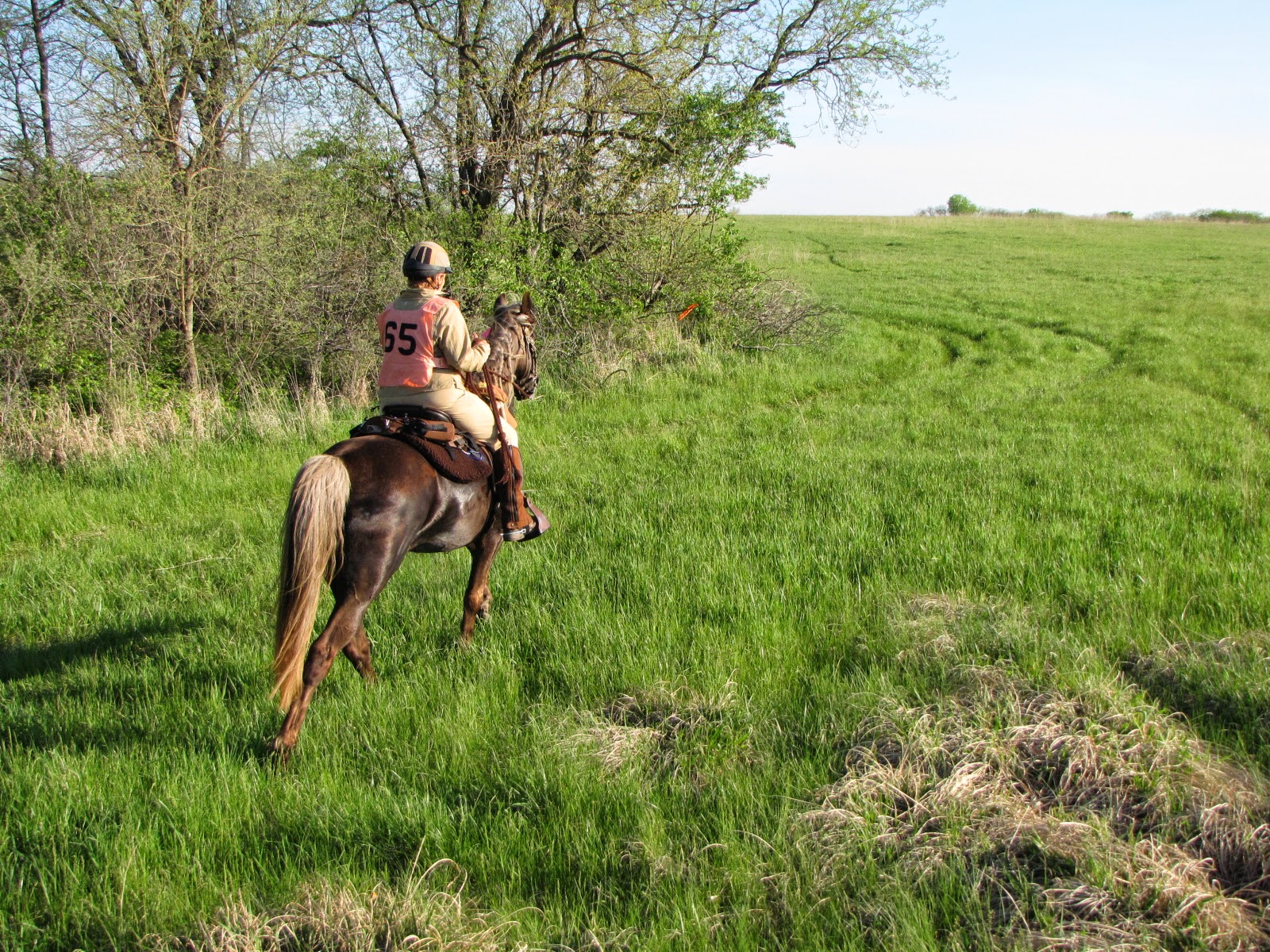 Our horses are judged by a veterinarian on condition, soundness and trail ability and manners.  Looking at my past cards, Windy has scored pretty high in those areas.  Again, the obstacles in the latter category -  not so well.  But those are only 15% of the total score.  I decided if I had to concentrate on the whole enchilada, I would be nervous, worried, concerned and would probably not do very well.  But if I concentrated just on 85% of Windy's score - condition and soundness - I might just have a good ride.  So that it what I did.  I rode for my horse. 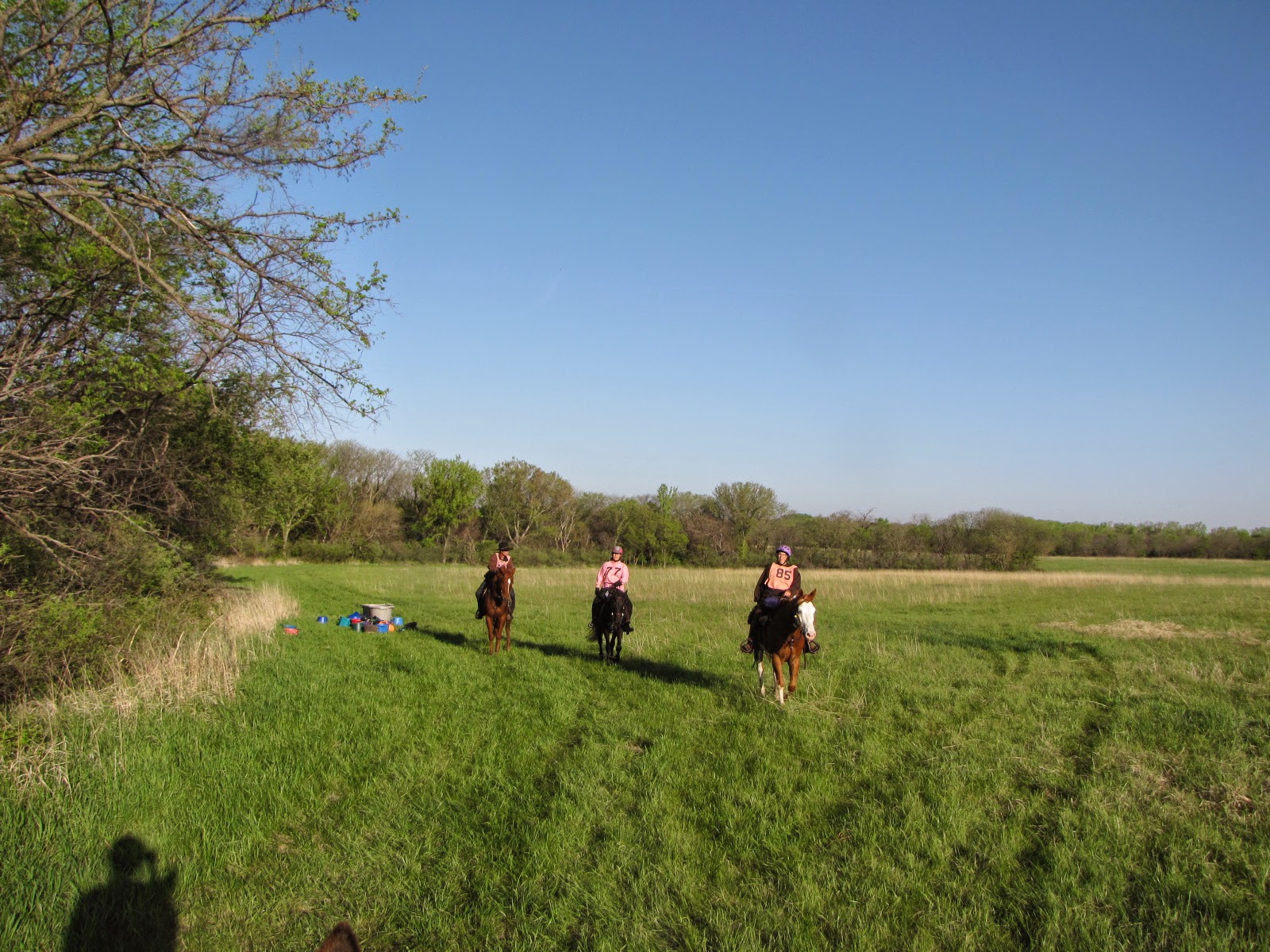 Mary, Sharron, Diane, John and I were all riding novice.  A new person from Kansas joined our group as we rode out that first morning.  Before long, we came to our first obstacle:  a pile of timber scattered across the trail.  We were asked to just continue along.  I glanced down and saw there was less of a mess to the left of the trail and moved Windy to that side.  I remembered to look up as I proceeded but did hear Windy knick a branch.  I was pretty sure that wouldn't make her lame so felt okay with that obstacle.  One down.... We continued on down the trail.  At some point there was a pulse and respiration stop.  Last year, Windy was a pistol at these stops; not wanting to stand quietly, difficult at best.  This time she relaxed immediately.  Only once did she not pulse down to the required 12 beats.  I asked for a retake and it landed at an 11.  We were good to go. 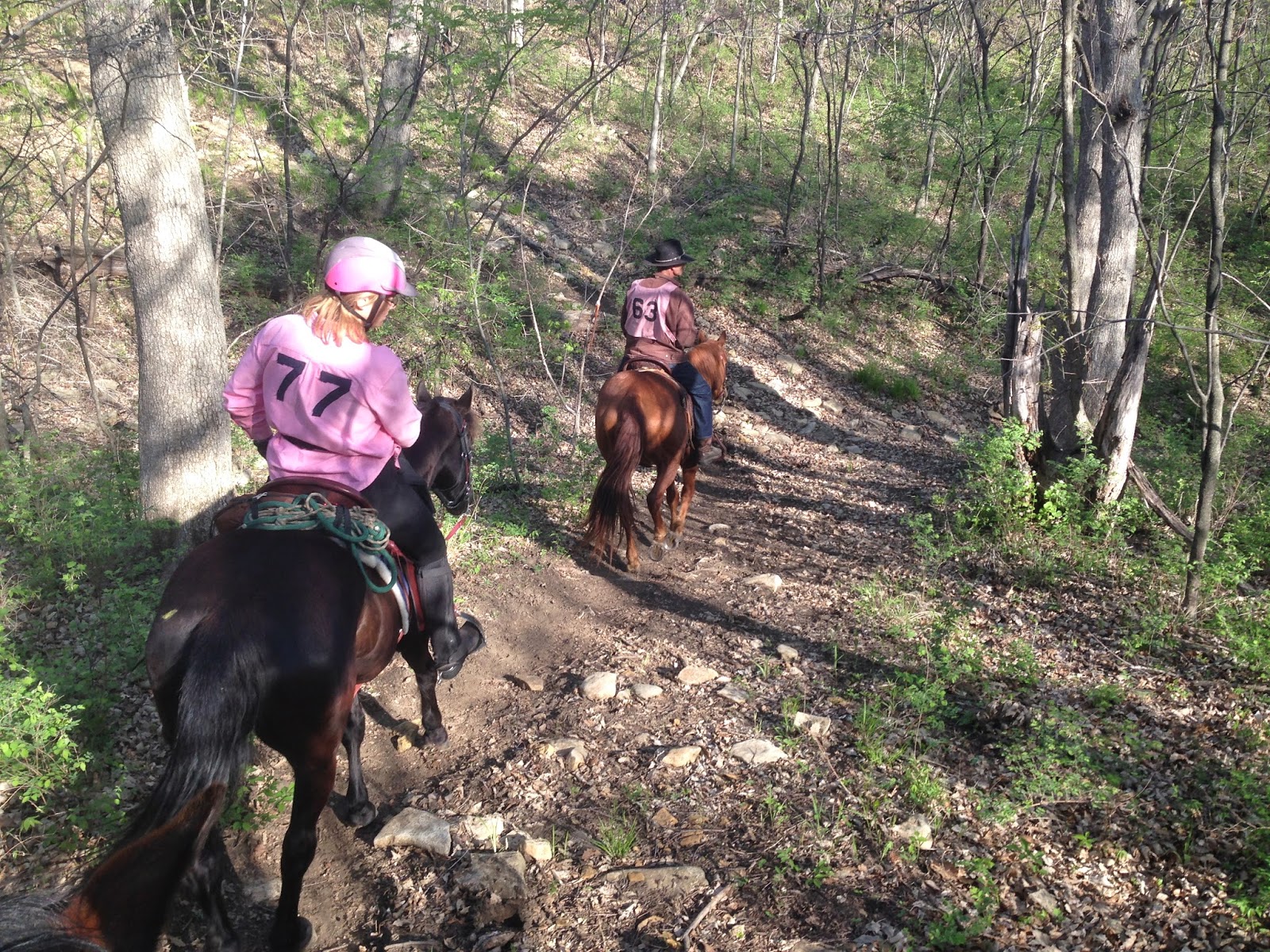 We saw the judges another time that day as we came down a long hill and back up another one.  My horse scored a "good" and "ok" on both hills.  I lost a couple points for my equitation going uphill.  We were also observed on a trot by and I lost a point for not being balanced.  Dang!  Another obstacle that day was backing between two ribbons.  Windy backs.  I put my legs a bit forward, apply light pressure and say "back" and she drops her head and will back across an arena.  Do you think she would demonstrate that for the judges?  You would think the never backed a day in her life.  We got a "did not complete" for that obstacle.  Deep breath. 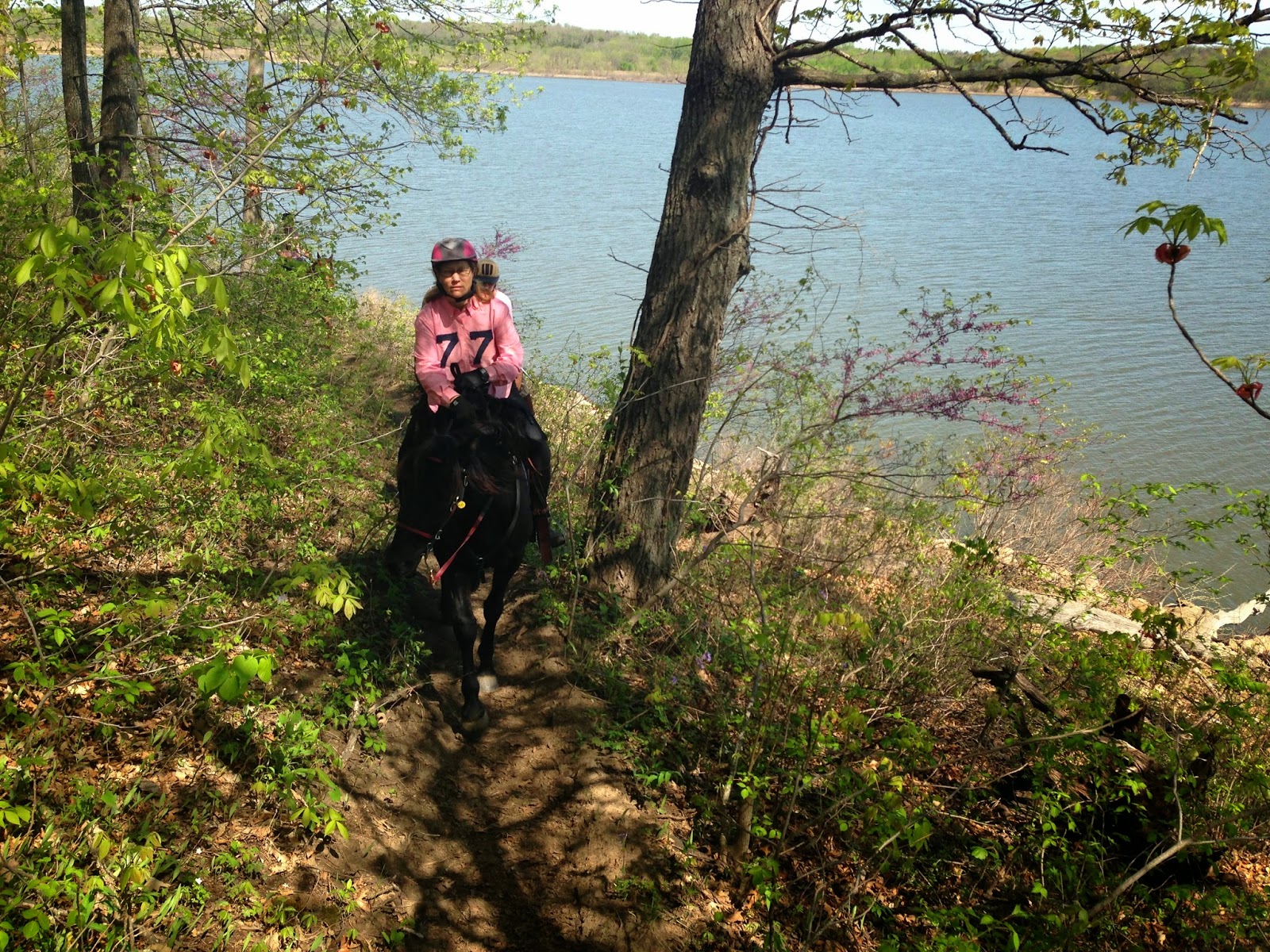 After nearly 23 miles, our check-out with the vet that afternoon was good and so far, I didn't think we lost any condition or soundness points.  The horsemanship judge visited our trailer later that evening and found Windy's stomach needed more brushing.  She was so full of ticks after that ride that I had coated her with spray.  It was what it was. 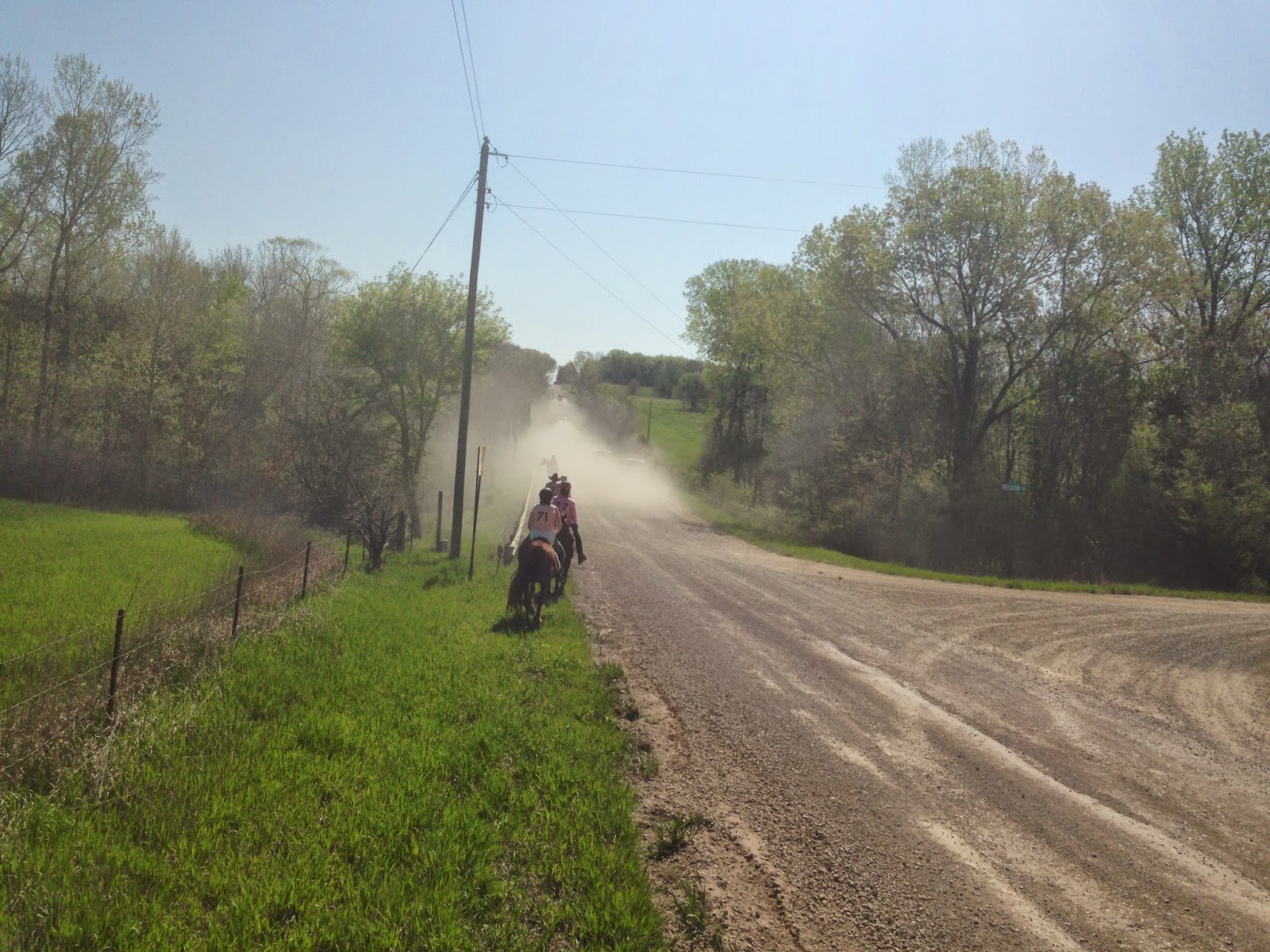 The next morning started with trotting out for the judges.  Again, I was off-balance, according to my scorecard but Windy was sound.   Before we could get out of camp, Sharron noticed a lead rope on the ground.  I stopped to pick it up so I could put it with the lost and found.  But when I went to mount up again, Windy was high as a kite.  She wouldn't stand still.  I ended up lunging her a bit to get her mind about herself and then got on.  When I got to a clearing, I opened her up.  I hollered to Sharron that I was coming up behind her and passed her on the right.  We then trotted down the side of the road and right by the judges' pickups.  They were hiding there in the woods.  Did they see me fight with Windy?  Did they see me run up behind Sharron? 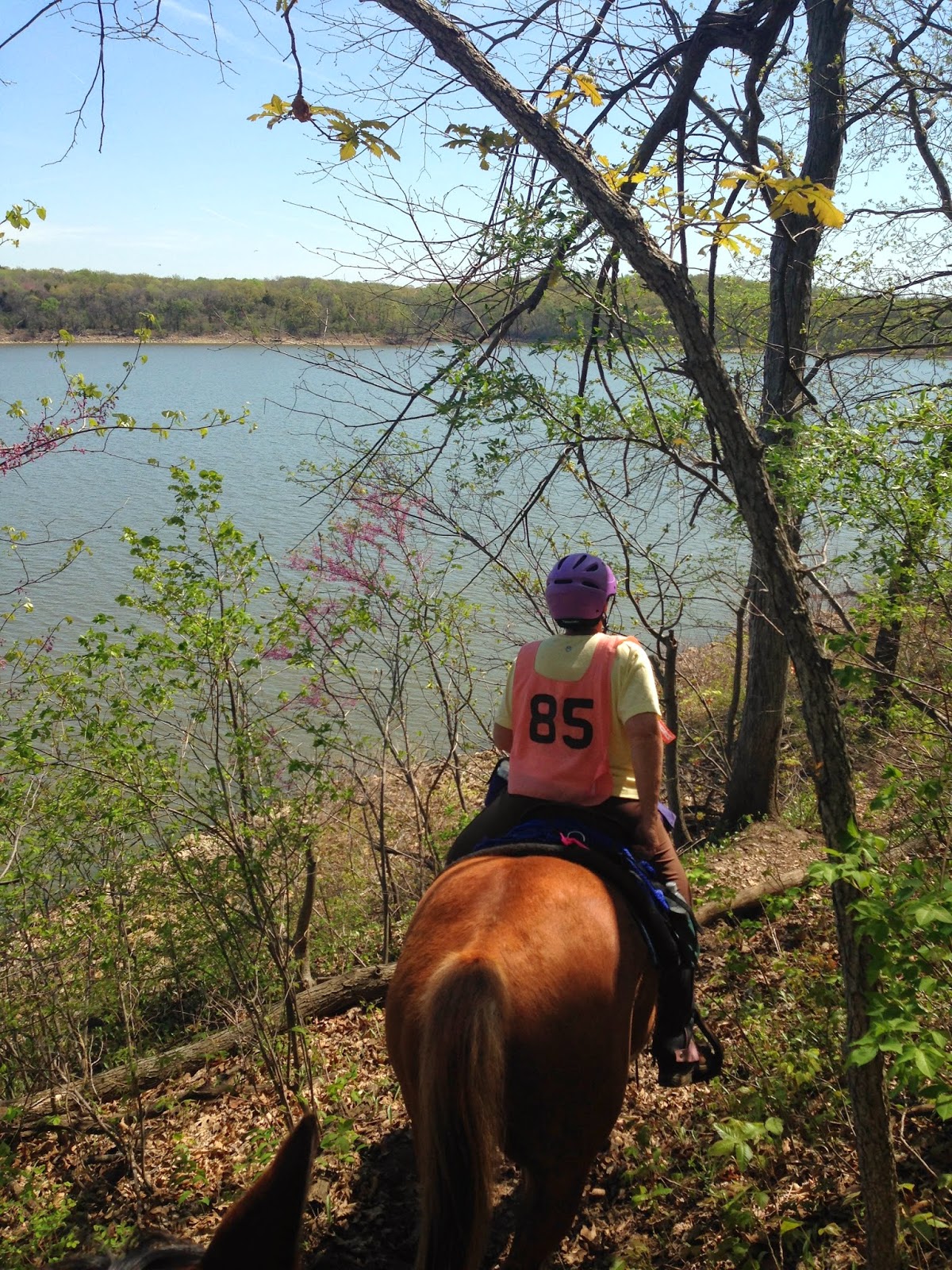 After another good pulse and respiration stop, the judges asked us to mount.  There was a mounting block for our use.  Windy has done real well with standing for me to mount but she was concerned about the horse in front of her.  I had to have her approach the mounting block a second time before I could get on.  She did stand the second time.  I was pleasantly surprised that I got a "good" from both the judges.  Later we were asked to perform a side pass obstacle.  Well, that didn't happen and I got another "did not complete". 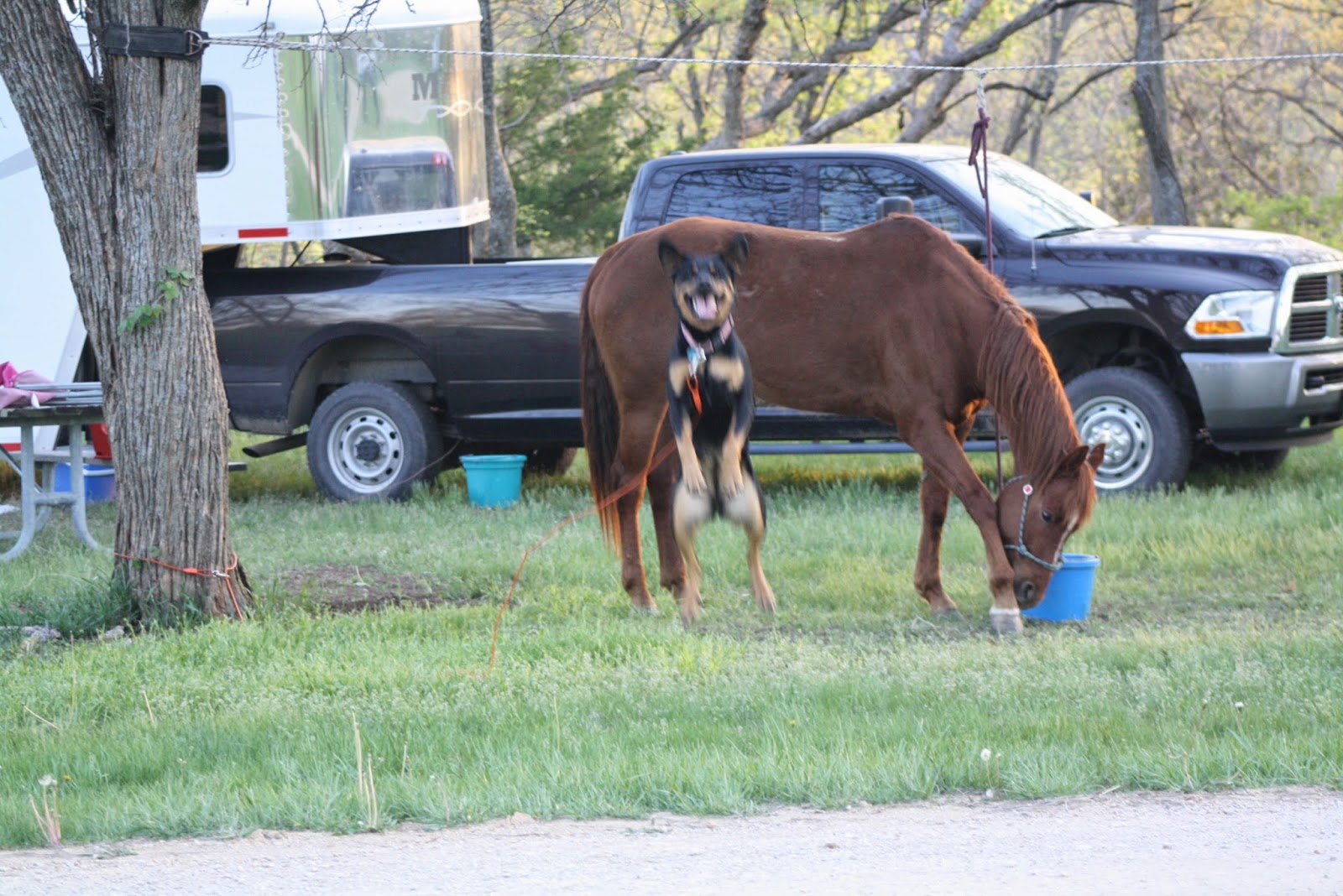 The eighteen miles passed rather quickly and the ride was over before it got real hot.  We groomed the horses and did our final show for the judges.  I was pretty sure Windy was good on condition and sound.  I didn't hear everything the vet had said but I do know that her metabolics were the same as the baseline at the beginning of competition.  Fancy, on the other hand, had a girth sore and had checked out "grade 1 lame" on Saturday.  Both are big point losses.  But she did complete some of the obstacles so I wasn't sure where she stood next to Windy.  John had some difficulty when showing in hand but again, he completed some obstacles.  We broke camp and waited for the scores to be tallied. 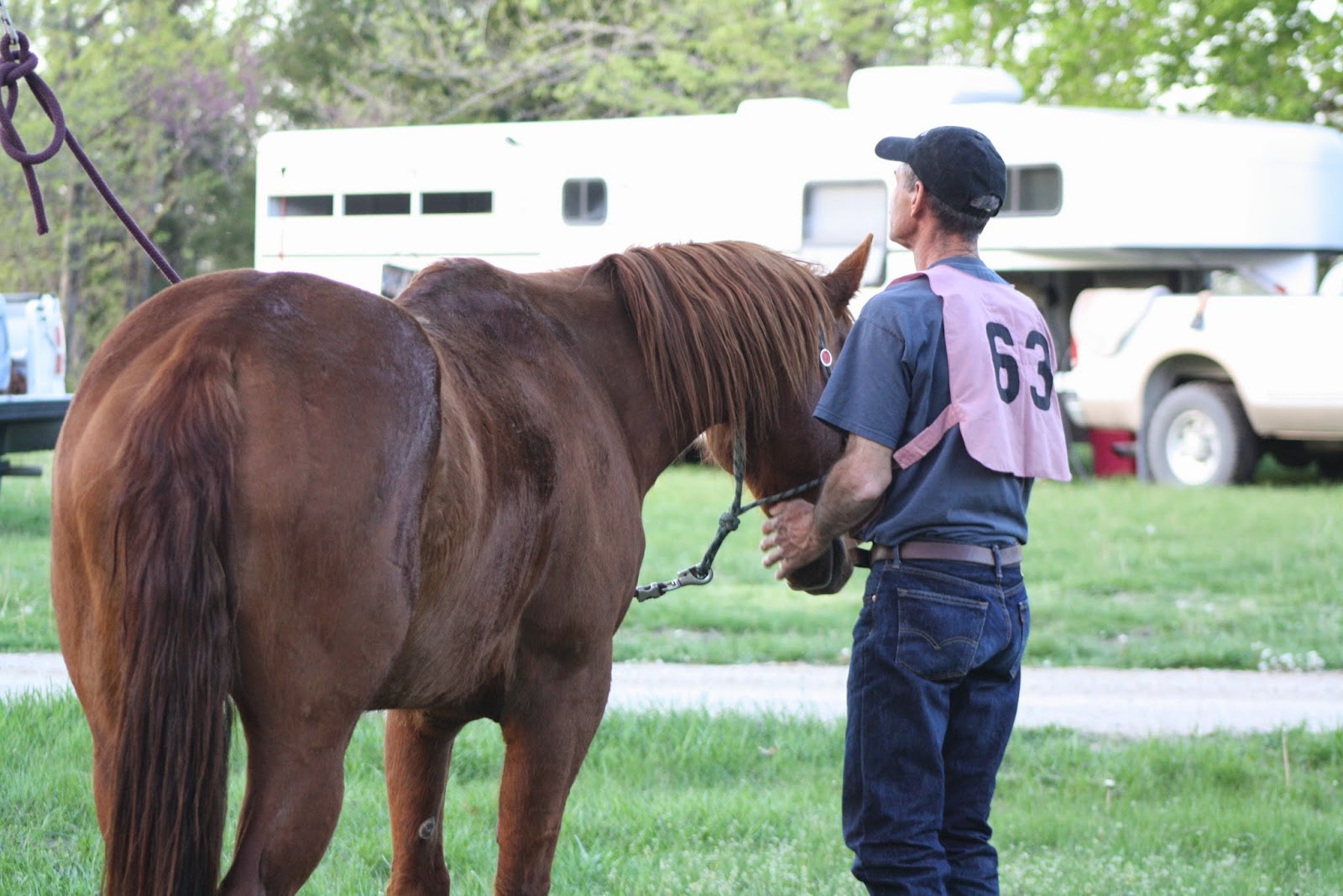 There were eight riders in our novice heavyweight class including Mary and Sharron and the new gal who rode with us.  I knew they had pretty good rides.  I figured my horsemanship scores weren't too hot but was hoping Windy's condition and soundness kept her in the top 6.  When Sharron's horse was called as the 5th place horse, I was disappointed.  Not only that her gelding didn't place higher but that Windy was most likely out of the running.  I was shocked beyond words when Windy was called as the second place horse!  She ended with a perfect score for condition and soundness. 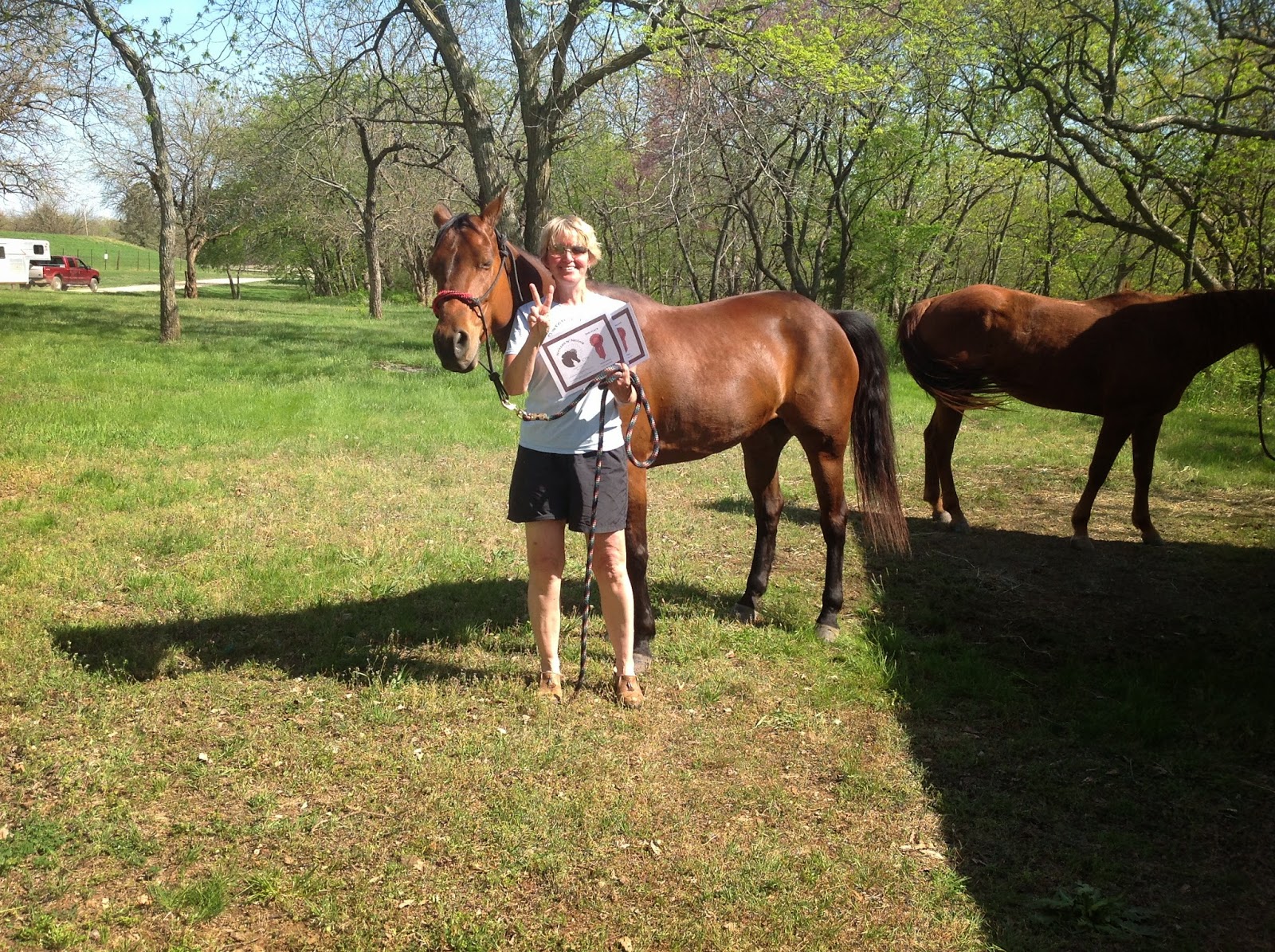 As I was admiring my 2nd place certificate, they called the placings for the horsemanship awards.  John's name was called for 4th place.  Since Fancy had not placed, I was glad that John did.  And when they called my name for 2nd place, I about fell off the picnic table.  Really?  Wow!  This is the highest placing I have received since I started competing.  Who'd of thunk?  There is a lot of good information on my scorecard which gives me areas for practice.  I can't wait. 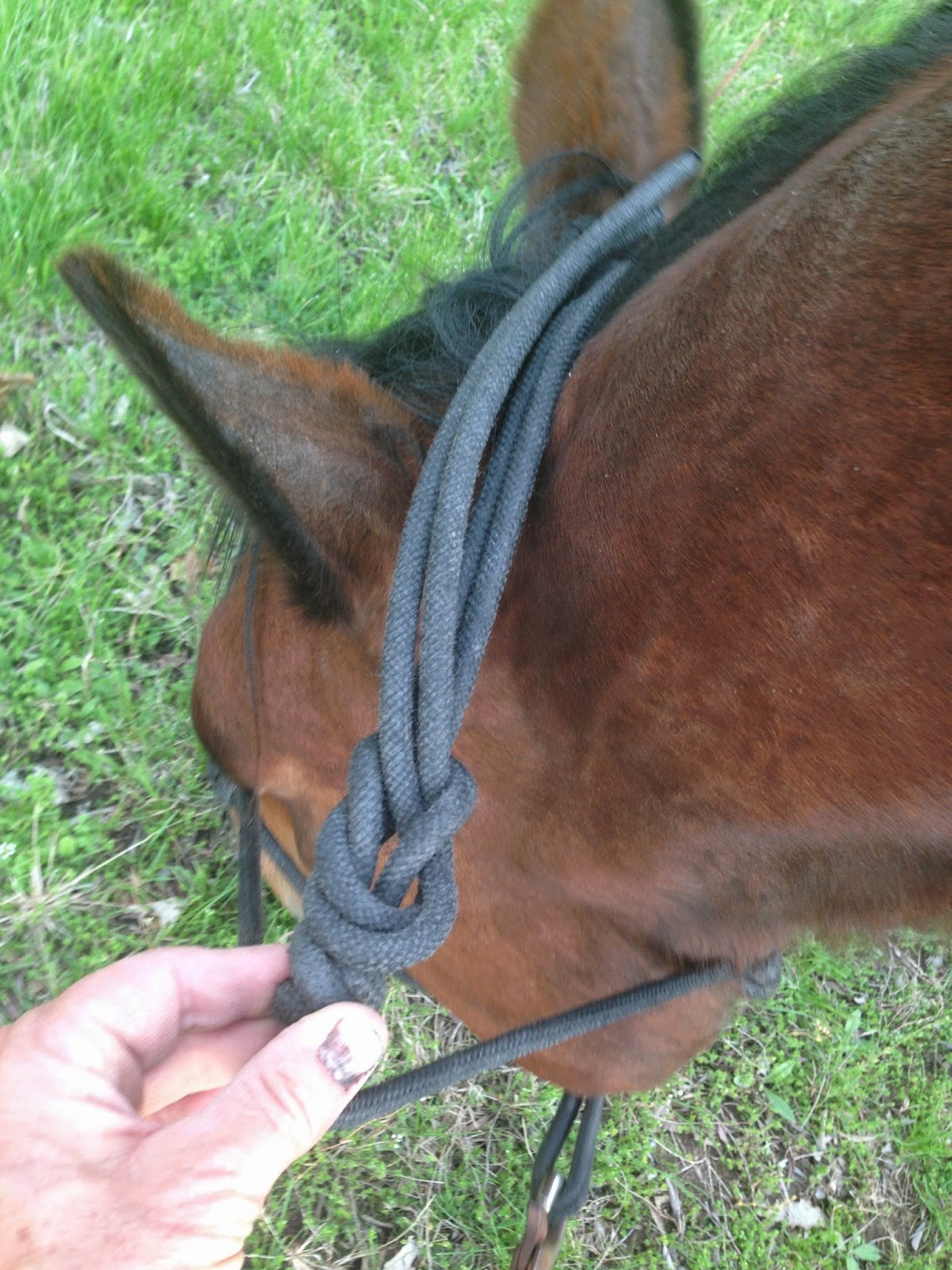 The next afternoon, I went to check on the horses.  Fancy's legs had a bad reaction to all the ticks so I pulled her from the corral and started to doctor them.  When I was carrying the halter back to the tack room, I stopped and tied it into a "Van Hargis knot".  I tugged on it, I pulled on it.  I wrapped it around a post and yanked on it with all my might.  My knot works just fine.