Here, There and Everywhere

I knew the last couple of months would be busy.  I usually keep my events calendar out of John's view because he gets palpitations just thinking about doing "all that running around".  But it was busy enough that I had to print it off for him.  I'm not sure he even looked at it but rather let me pull him around by the nose and hear him complain.  Overall, he didn't gripe too much.  But between you and me, I am the one who is tired!  I slept until after 8:00 AM yesterday morning.  Talk about burning daylight!


Since I last posted, there have been three more competitive trail rides (CTR), two clinics, a trip home for my 35th class reunion and a quick trip to Atlanta for work.  Literally planes, trains and automobiles.   But the last CTR is over until August or September, so I am coming up for air.  Unfortunately, that air right now is hot and humid! 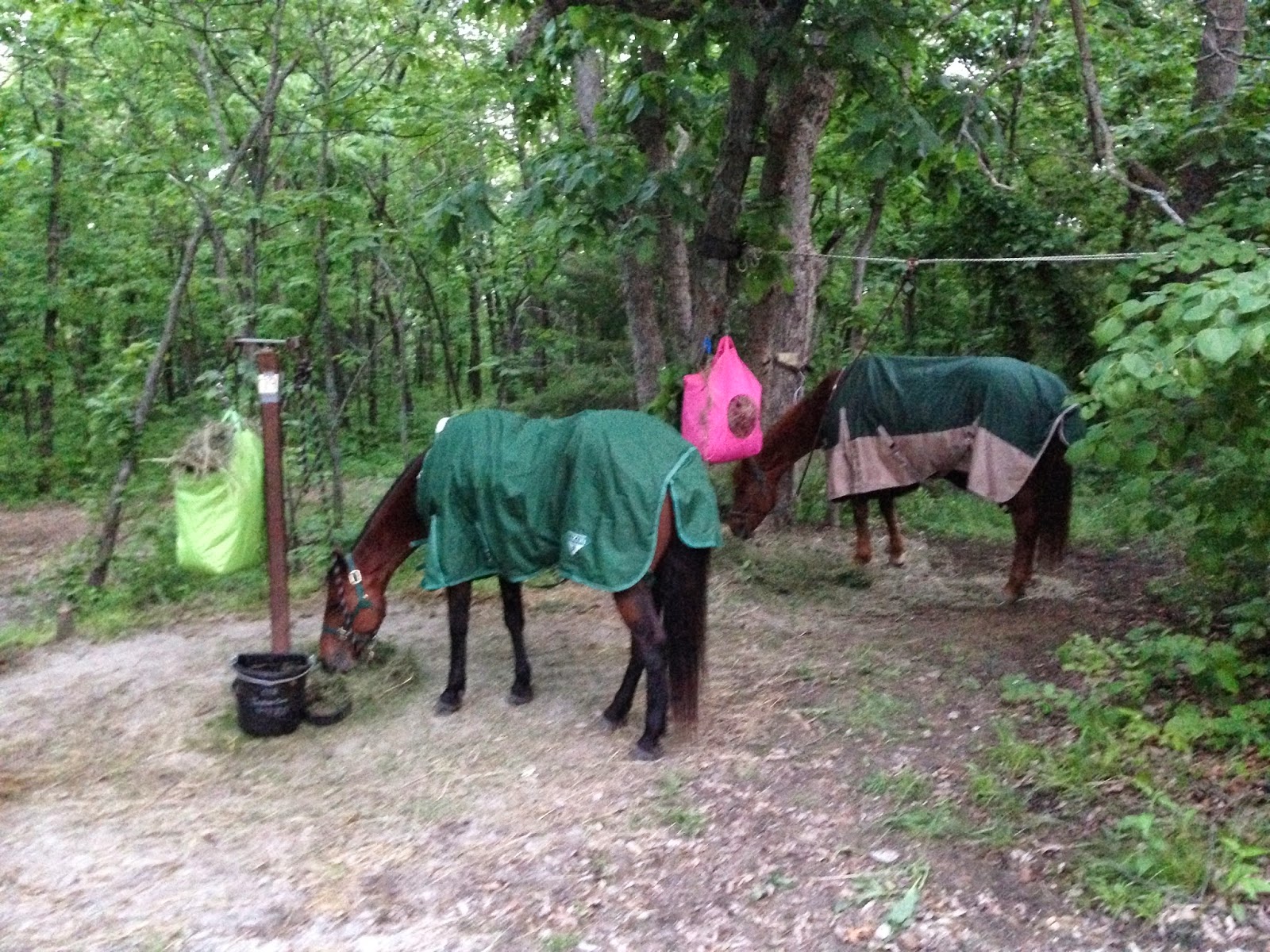 Our second CTR of the year was at Hillsdale Lake near Hillsdale, Kansas - southwest of Kansas City.  It was our first time at this lake and I was really impressed with the facility.  We had full hookups with water, a hitching post for one of the horses and we high-tied the other.  The spots were shady and close to the trail. 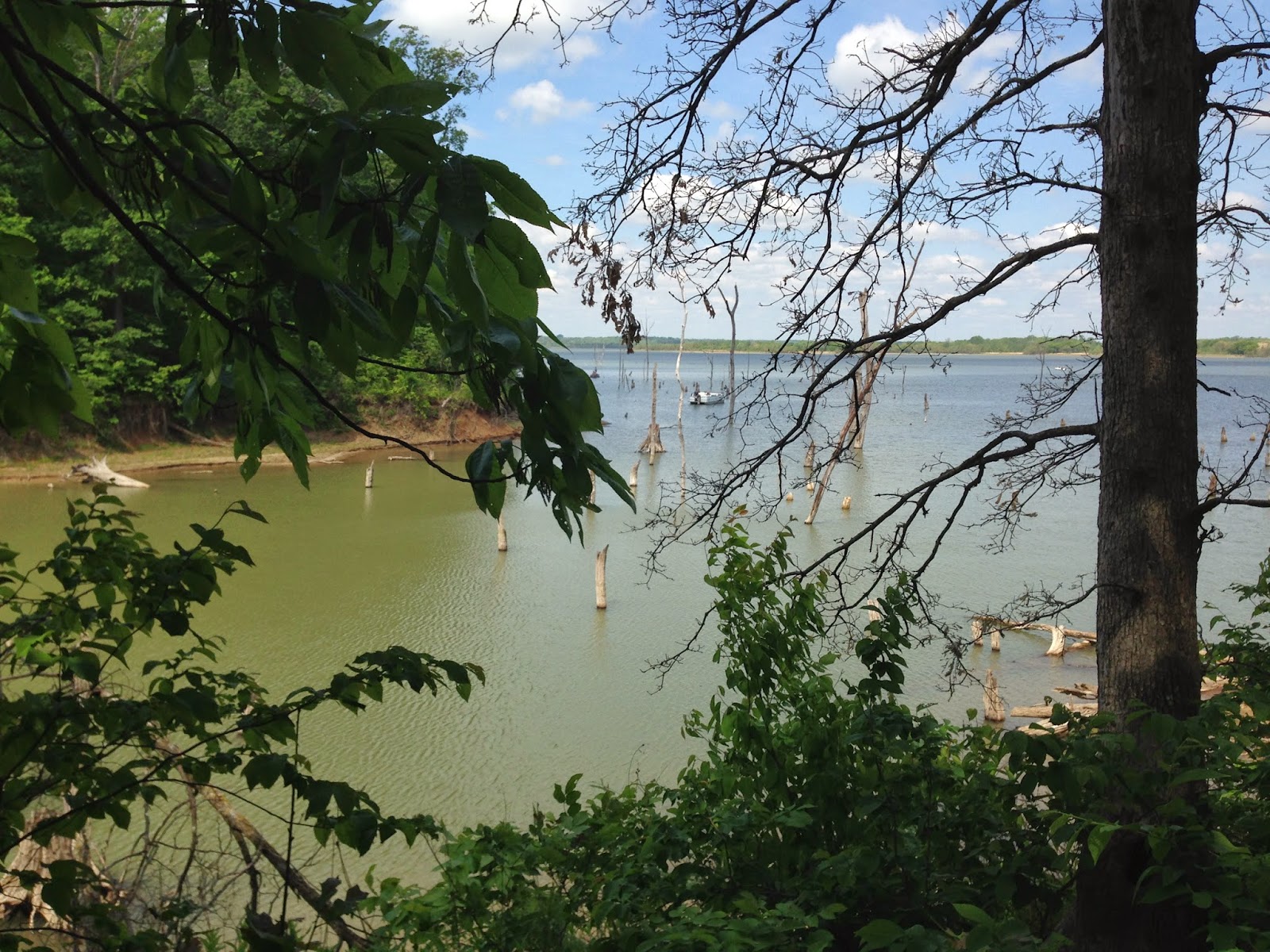 We have really lucked out for these rides and had great weather; even jacket weather at ride out in the mornings.  I was disappointed that there were only four in our class for this ride; having a full class makes you "earn" a placing.  Windy checked in good and overall, we had an okay ride.  She was a little cagey when we would be asked to do obstacles but she didn't refuse like the first ride, so I'll take that as an improvement.  She didn't "earn" a placing since she came in 4th or last.  I placed 2nd which was a surprise.  John pulled a 1st place in horsemanship and 3rd in horse.  Fancy did well on the trail but checked out Grade 1 lame which cost him some points.


We had a couple weeks off from competition for those aforementioned non-horse related trips.  We also attended a couple clinics that were offered to competitive riders.  The most recent was put on by Cherie Jeffcoat, a past President's Cup winner and current Horsemanship judge.  She started us on the ground and then worked into the saddle, critiquing our riding style (if you could call what I do in the saddle riding!) and we simulated obstacles.  Overall, it was probably the best clinic I have ever attended.  I don't know if it was coincidence or a result of the clinic that my next couple rides were much better.


Our local distance riding club, NECTRA,  held the next ride here at our own Branched Oak Lake.  I signed up to ride in the competition but helped the club with identifying trail to get the necessary miles for the ride.  I brought both Fancy and Windy to the lake with me earlier that week so I wouldn't ride down one or the other while clearing and marking trail.  Unfortunately, the night before the ride, some of the kids at other camps found our ribbons on the trail and decided to take them.  We found ourselves out on the ATV late the night before the ride,  re-ribboning the trail.  Since I was familiar with the area and trails, John and I rode point going out the next morning so we could re-ribbon anything we missed for the riders behind us. 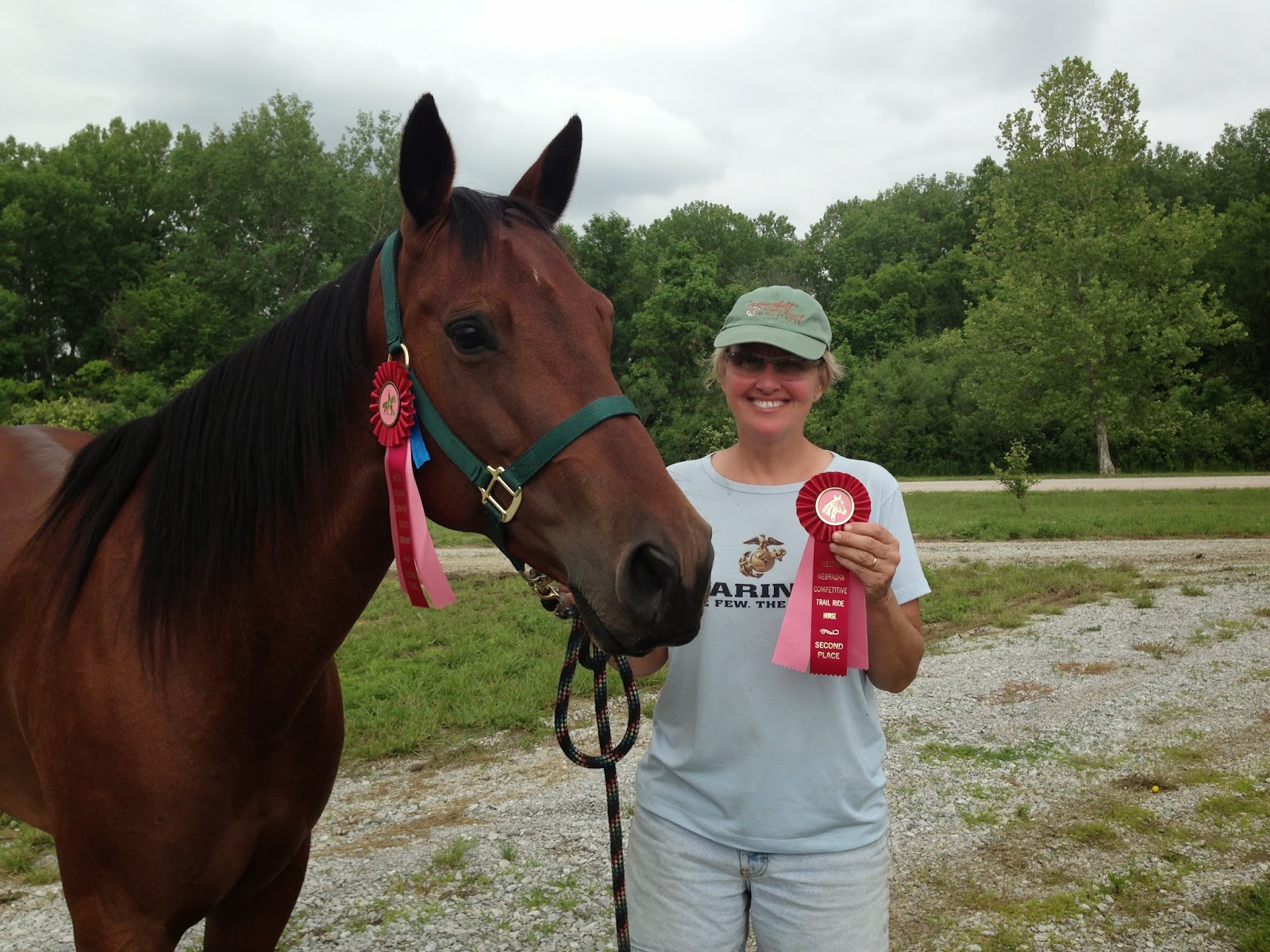 We rode with a new rider, Helen, and had such a good time.  The horses kept together at an easy trot, marking trail on the fly as needed.  Windy was a bit pushy at check in - which is odd for her - but settled nicely for the obstacles.  I was thrilled when we both pulled 2nd Place for this ride in a full class.


I really thought that was the last CTR until later this summer or early fall but my friend, Mary, has a way of arm twisting.  There was a ride scheduled in southern Missouri - a mere five hundred mile drive - that she thought we should go to.  We, being Mary, our friend Sharron, and me.  John said he didn't mind sitting out this one so I quickly entered, got my traveling papers, hooked up my trailer to Mary's truck and away we went.


We left on Thursday night and drove the first half, overnighting at a 4H facility in Harrisonville, Missouri.  It made for an easy drive the next morning.  We settled in to Flying R Ranch near West Plaines, Missouri shortly after noon on Friday.  What a great horse facility!  Again, full hook-ups under big shade trees and this time, covered and lighted stalls for the horses just out our back door.


Our check in wasn't good!  Perhaps I have been lackadaisical in working with her on this because we always have good check ins.  But she wouldn't stand for the judge and when we did our trot out, she cut in front of me and about knocked me to the ground.  Horses.  They have a way of humbling us, don't they?


The ride would take us into Mark Twain Forest, beautiful wooded trails with many clear river crossings.  At the ride meeting the night before, the map was a little confusing but having a few of these CTRs under our belt now,  we figured it would all come together out there on the trail.  We overestimated our capabilities a bit. 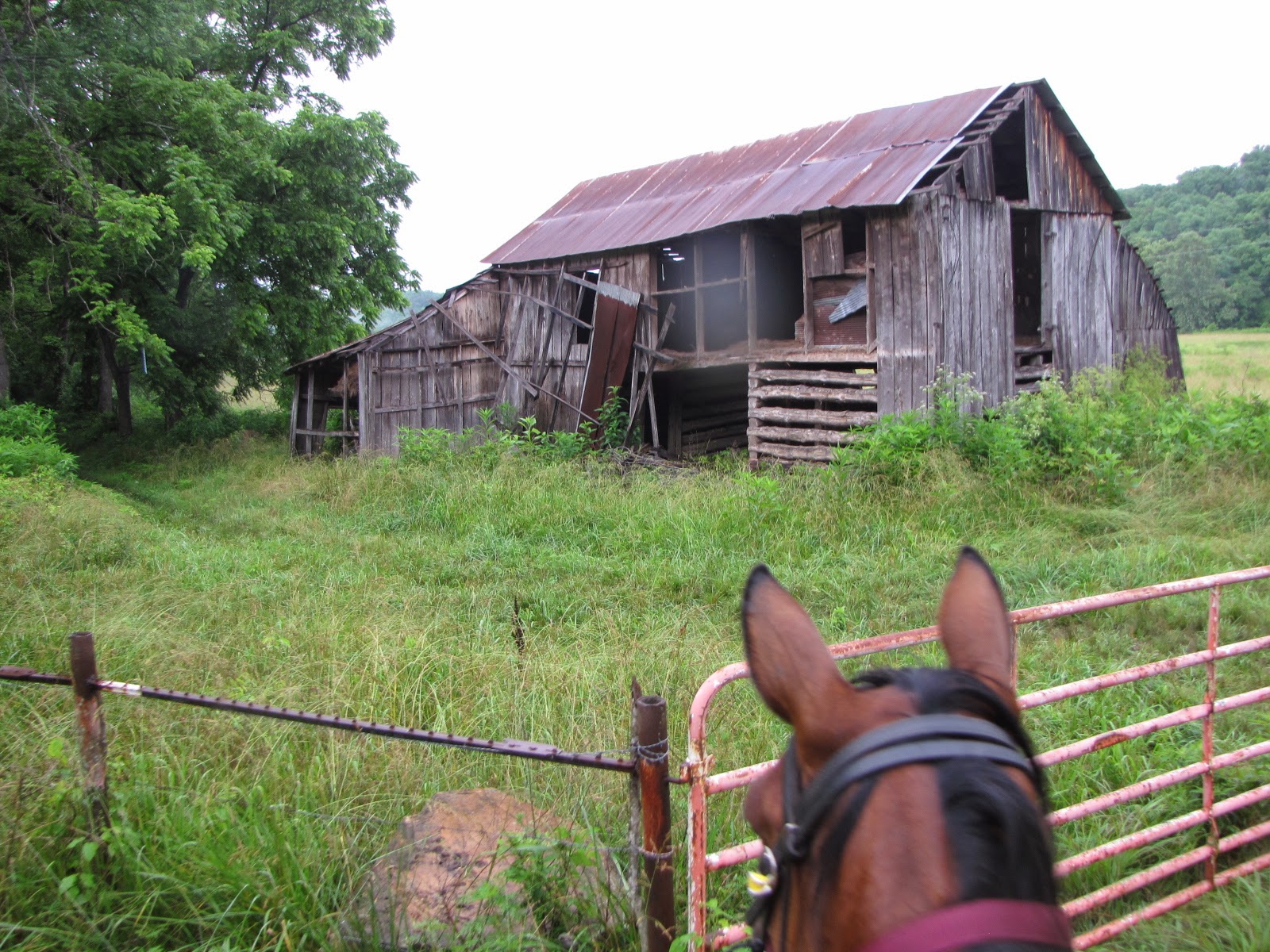 Really, we didn't know we were lost.  We were to follow blue and pink ribbons and we were.  And we might still be out there following those ribbons if we didn't run into those riding Open who had been out on the trail longer.  They had been down that trail and it wasn't the right one.  And to their calculations, their wrong turn (and ours) had put them way behind schedule.  Now the Open riders are the best of the best and if they were wrong, we most certainly we were wrong.  We tucked in behind their Arabs and Fox Trotters and wondered aimlessly with them until they found where the right trail picked up.  (Big sigh.) 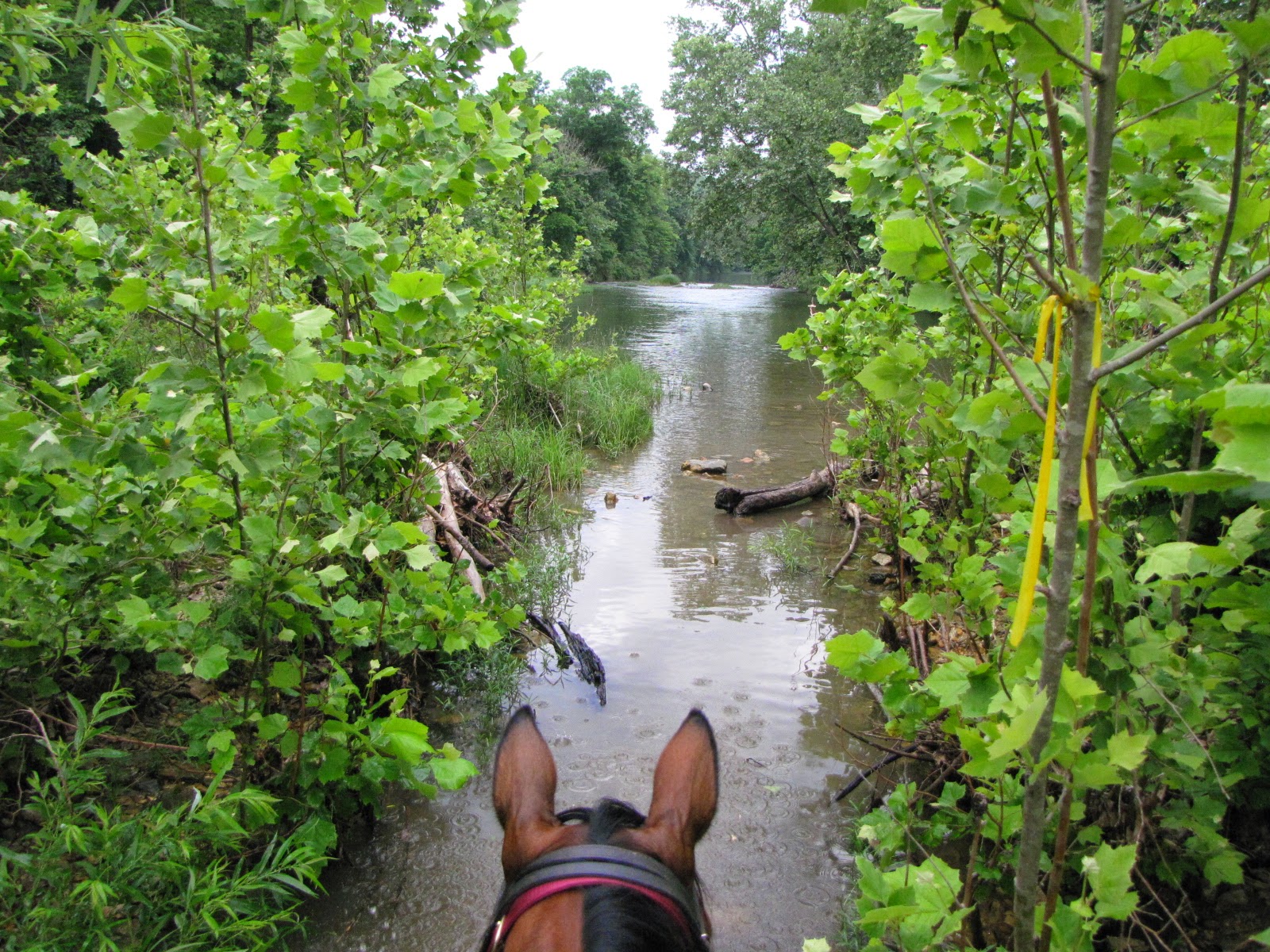 About a dozen of us rode into the first obstacle to find safety riders on radios relieved to find half their riders that they had deemed lost.  We let the Open riders go ahead of us as they had more time to make up than we did.  When Windy and I approached the judges, I found her quiet and mannerly.


We did okay at most of the obstacles.  Not outstanding but not bad.  Just okay is quite an improvement from the first ride this year, so I will take it.  I was also thrilled that she had no back soreness or soundness issues.  Being a flat lander, the hills of Missouri can be challenging for our horses.  And this vet was very thorough. 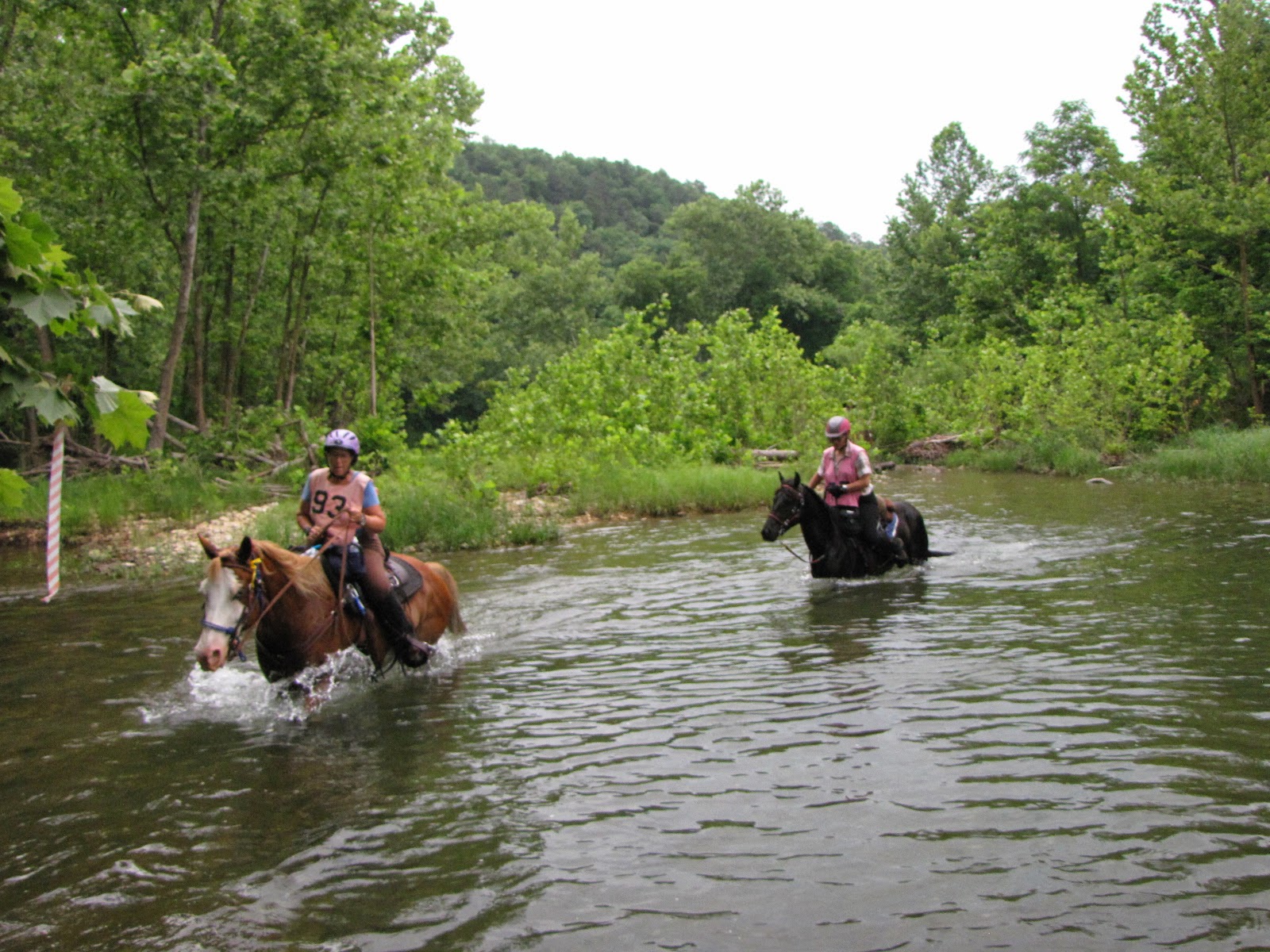 We received the same maps for the next day with new instructions.  And we almost made that wrong turn again but corrected ourselves before we got too far.  Although rain was a possibility, we didn't plan on it actually raining so was quite surprised when it started to downpour.  Sharron found a poncho for me and before long it let up.


At checkout, Windy once again was a pistol.  WTH?  Although we lost no points for soundness and condition, her behavior at check in and check out lost her enough points to take her out of 1st place - which she would have easily won - and most likely sweepstakes - put her in 3rd.  I, however, garnered my first win!  1st place in Horsemanship!


Now that we have a little time off, I have been searching for a new truck.  While I love my Ram, the hemi is just not cutting it with my new trailer.  It pulls it like it isn't there but the gas mileage is killing me.  If we can get a good enough deal, we are planning to trade it in on a diesel.


Let's all be reminded that buying a horse is the cheapest part of horse ownership.  But I am really digging the rewards of coming together as a team with that said horse.


I"ll try not to be away from here as long next time.