We were planning to go camping this weekend.  No competing, just pleasure riding.  I miss my camping buddies!  We had food planned, ETAs figured out, even talked about which dogs would make the trip.  And in all of our excitement, we forgot to check the weather.  I woke up to rain, lightning and thunder, a flooding pasture again and two to four inches of rain in the area.  The camp closed the trails.  So much for best made plans.

I picked up my (our) new truck yesterday.  The gooseneck hitch will not be in until next week so we were going to have to hook up to Ol' HiHo Silver this weekend for our camping trip.  That gives me shivers just thinking about all the "fun" I had with that old truck.   Look how far the bed of the truck drops with the trailer attached! 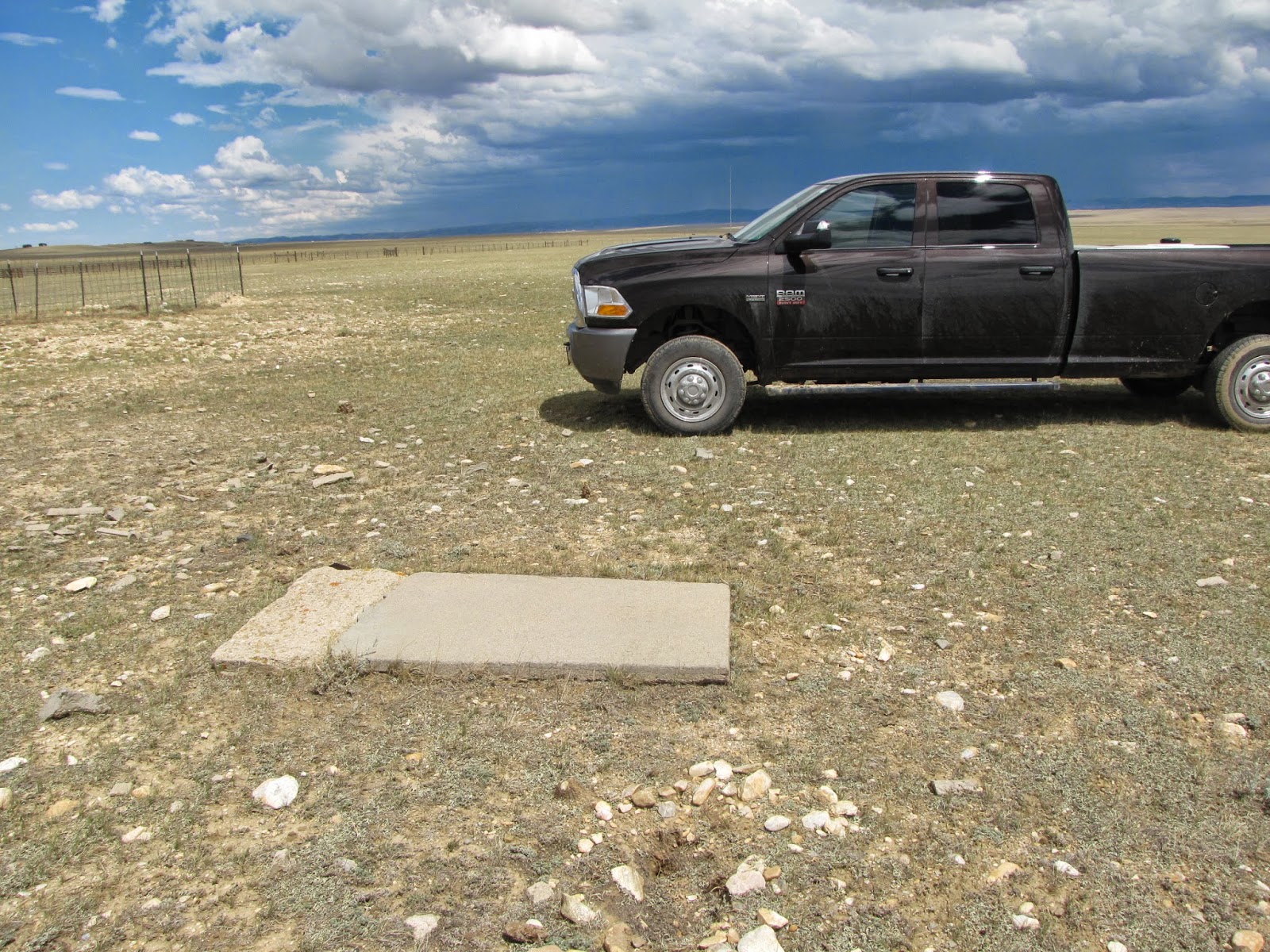 I really didn't "need" a new truck.  I just bought a new Ram in 2011.  After all the trouble we had with HiHo Silver, I had sworn off Chevys and diesel motors and bought a Ram 3/4 ton with a hemi.  I got a good deal buying what was on the lot.  I'm sure it had some sort of sexy color name but to us it was UPS brown.  At the time I was pulling a two horse trailer and while the mileage wasn't like driving a Honda, it was okay.  Best of all, I could go from Point A to Point B and back to A again without having to call a tow truck or unload Windy and ride her home!  It never caught fire or severed a brake line ever, unlike it's predecessor. 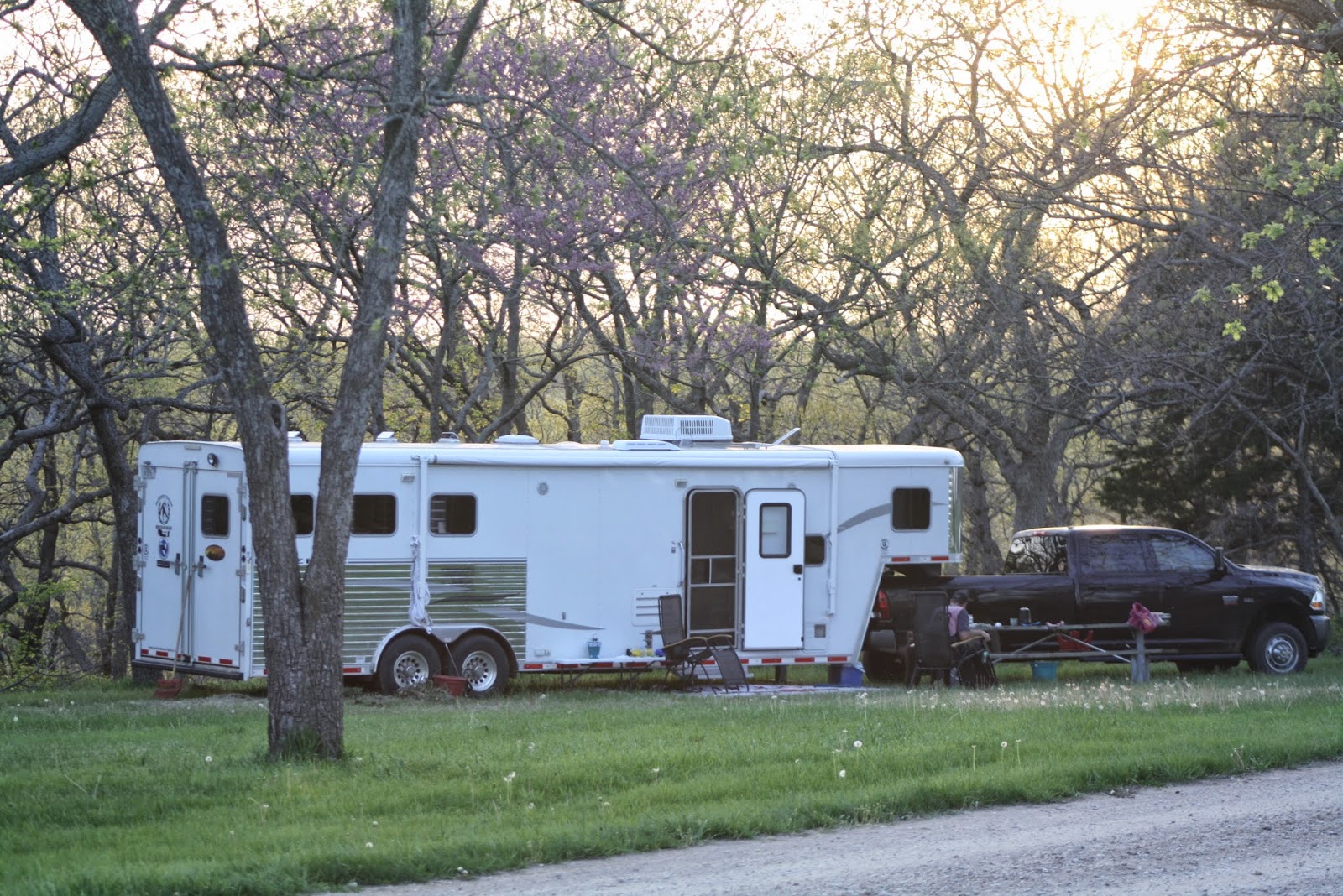 I'm at the age where you start saying things like "you can't take it with you" or "spend it while you have it" and last fall we decided to upgrade trailers.  We knew we might not have enough truck to pull the new Maverick which weighed in twice as heavy as our two horse Sundowner and even made the comment that "the worst that can happen is we have to buy another truck".   Fully loaded, we were at or above our GCWR and averaging about 7.7 mpg.  Once with a headwind, we dropped to 5.5 mpg.  It was then I decided we most likely needed another truck.


I called the dealer where I purchased the "UPS" Ram,  just feel them out and see what's out there.  I said I was looking for a 3/4 ton, 4x4, long box with a diesel engine and preferably no carpet.  When he asked "what color",  I said I wasn't really picky.  I had a list of those colors that I didn't want like yellow, but not so much what I liked.   When he called me back with a dark gray option - Granite Something or Other -  I looked up the color online and it was too dark.  I had a dark truck and I hate how dirty they look with just a coat of dust.  I decided if I was going to buy one, I was going to get picky.  I told him if I could have my pick of colors, it would be Prairie Pearl.  Second runner up would be Bright Silver Metallic.


The UPS Ram does not have a map light.  It has a dome light but it is not handy like a map light.  And if you are a passenger, you are at the mercy of the driver to turn it on and off for you.  As silly as this sounds, my new truck must have a map light.  My dealer was excited to call when he found the "perfect" Prairie Pearl truck.  But we stopped short of shipping it when I found there was no map light.  I'm a tough customer.


Meanwhile, John and I stopped at a Dodge dealership before a wedding and we didn't find Prairie Pearl but found almost every truck in that row had a map light.  Then we realized we were in the one ton row, not the 2500s.  When we went back to the maplightless 2500s, we didn't see a huge difference in price to their big brother and they seemed to be quite a bit more truck!


So when my dealer called me on Monday saying he found a 2500 in Prairie Pearl WITH a map light, I told him to shift gears.  We now wanted that in a 3500, not 2500.   He was a true professional and didn't cuss at me but said he would see what he could find.  Moments later, he came back with a Bright Silver Metallic one ton with a map light; my second choice.

I called John and asked what he thought.  Should we get the one ton Silver or the 3/4 ton Prairie Pearl?  He said we should get a "dually" and that was not an option.  He said we should get the biggest truck we could afford.  I polled my Facebook friends on the color and the majority liked the silver.  Yes, it did match my trailer, but it wasn't Prairie Pearl.  A friend at work reminded me that they can get "any color you want" - that I am the customer.  So when the dealer called me back to see what we had decided, I told him Prairie Pearl but in a 3500.  He must continue his search. 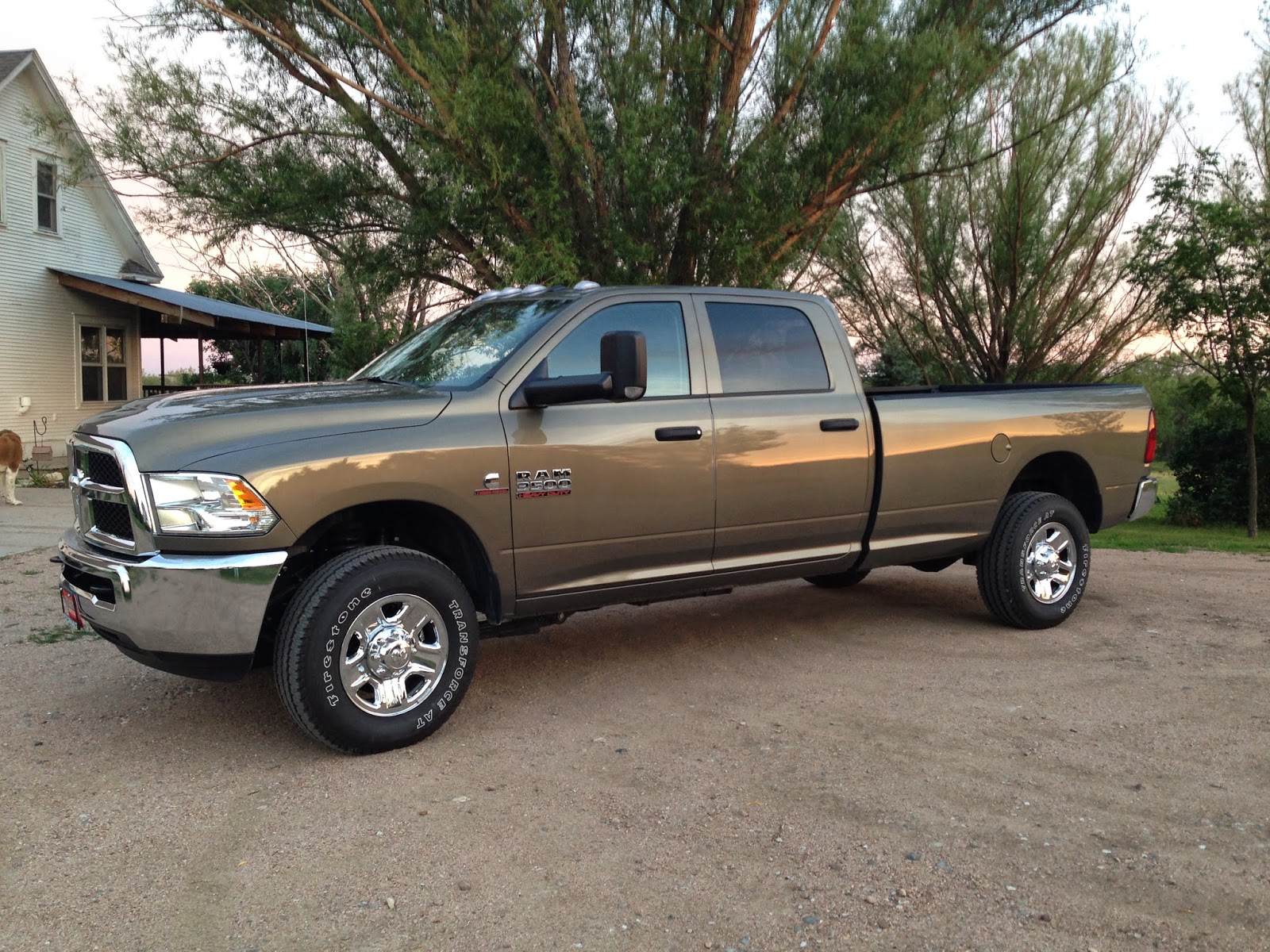 My new truck is a 2014 Ram 3500 with the 6.7 Cummins diesel engine in Prairie Pearl.  I love both the color and the name of the color.  A Facebook friend said it would be a good name for a horse and I agree.

While it has the coveted map lights, I wasn't keen on were the clearance lights above the windshield.  I told the dealer it kind of pimped it out a little more than I wanted and asked him if they could be removed?  He never really answered me if they could or couldn't but took the opportunity to try to convince me that they really are a nice option.  I decided to let it go.  I guess when I am in the truck, I don't have to see them when they are on. 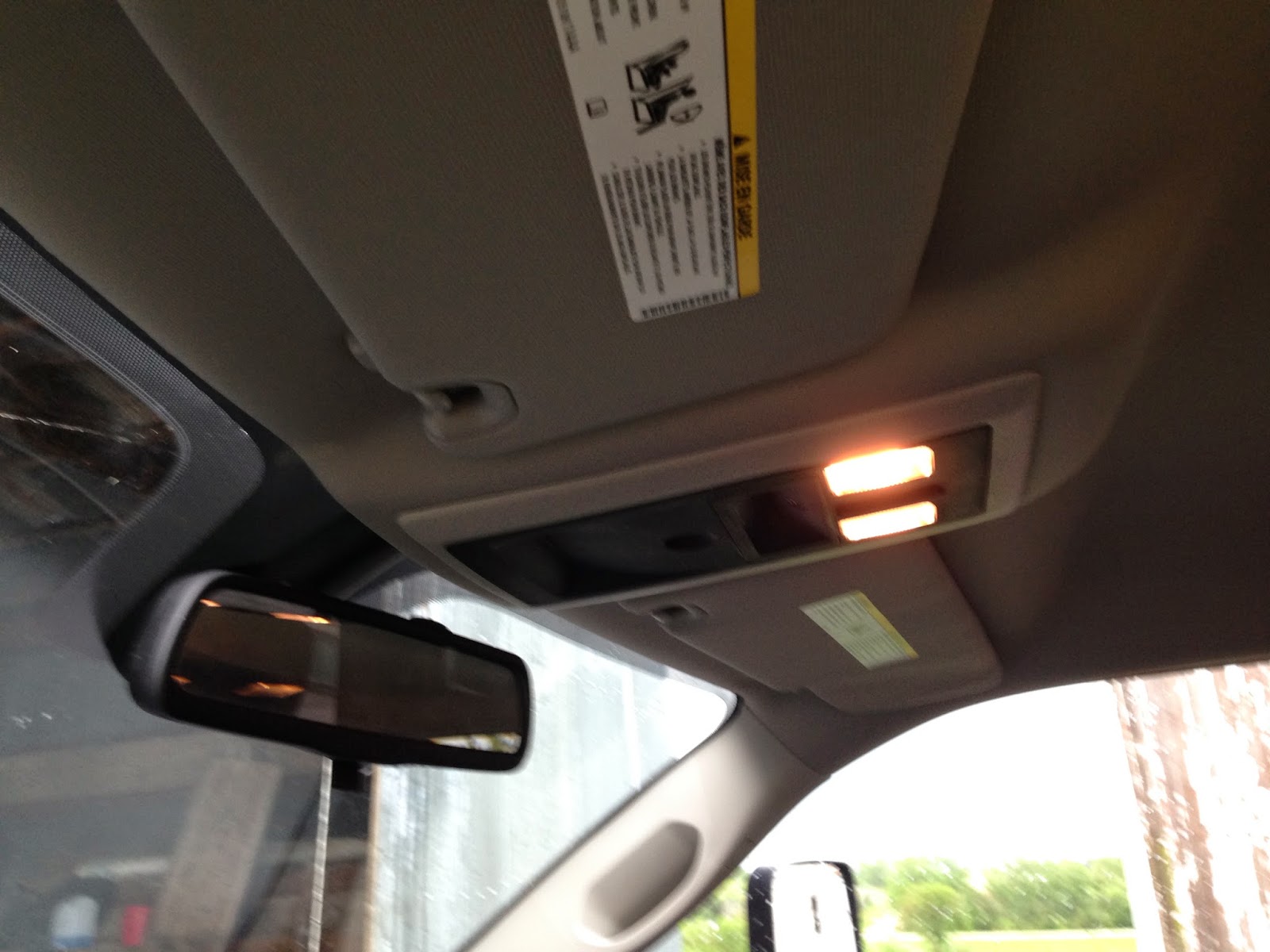 And speaking of lights, here are those pesky map lights or console lights that made my dealer have to work for his commission.  Now why wouldn't they put these in all trucks? 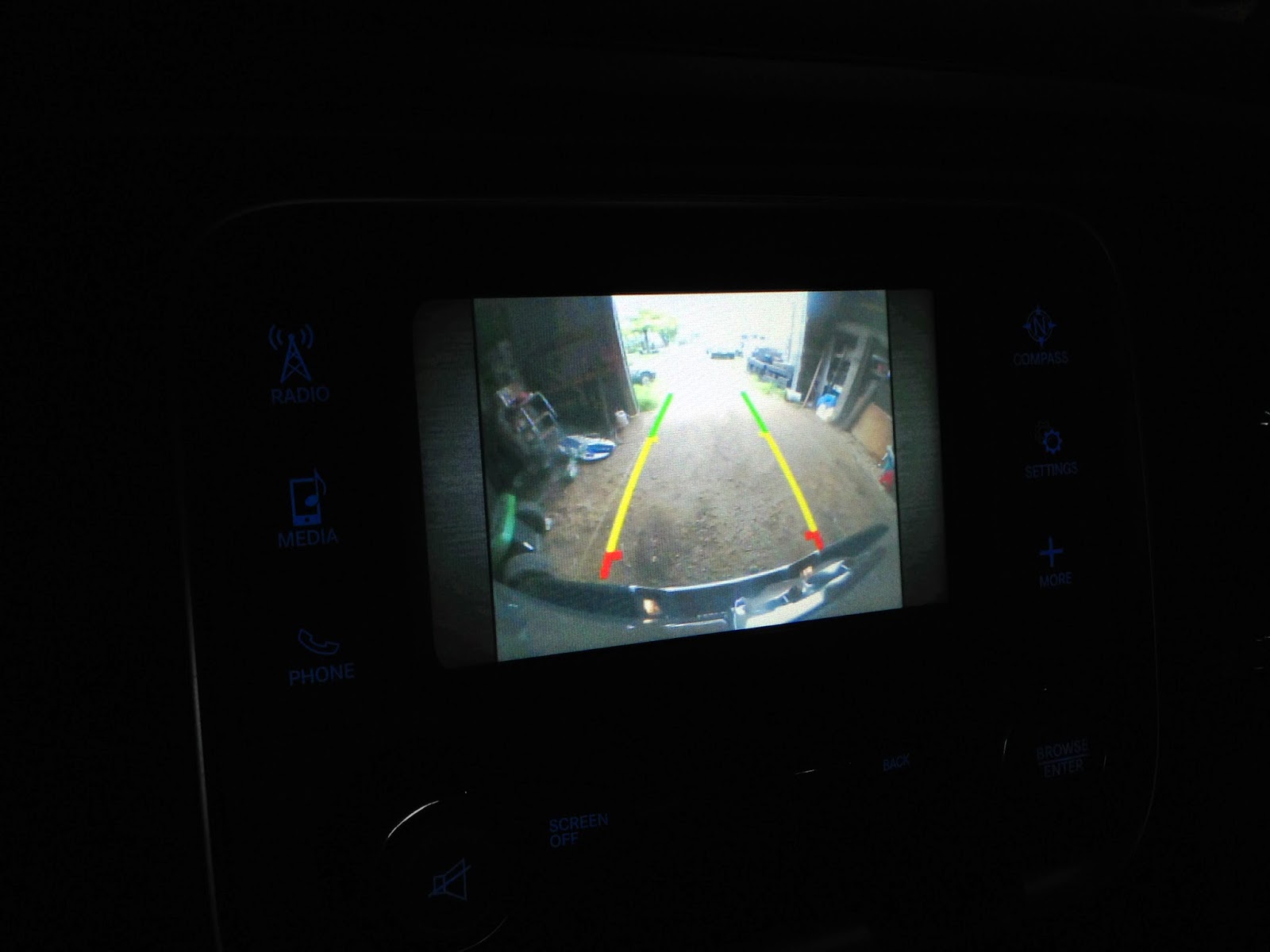 And this is a fun little feature - there is a camera in the back of my truck and when I put it in reverse, the display on the radio shows what is behind me and those green/yellow/red lines change as I steer.  It also gives me the beep, beep, beep sound when I get close to hitting something in our cluttered up shed. 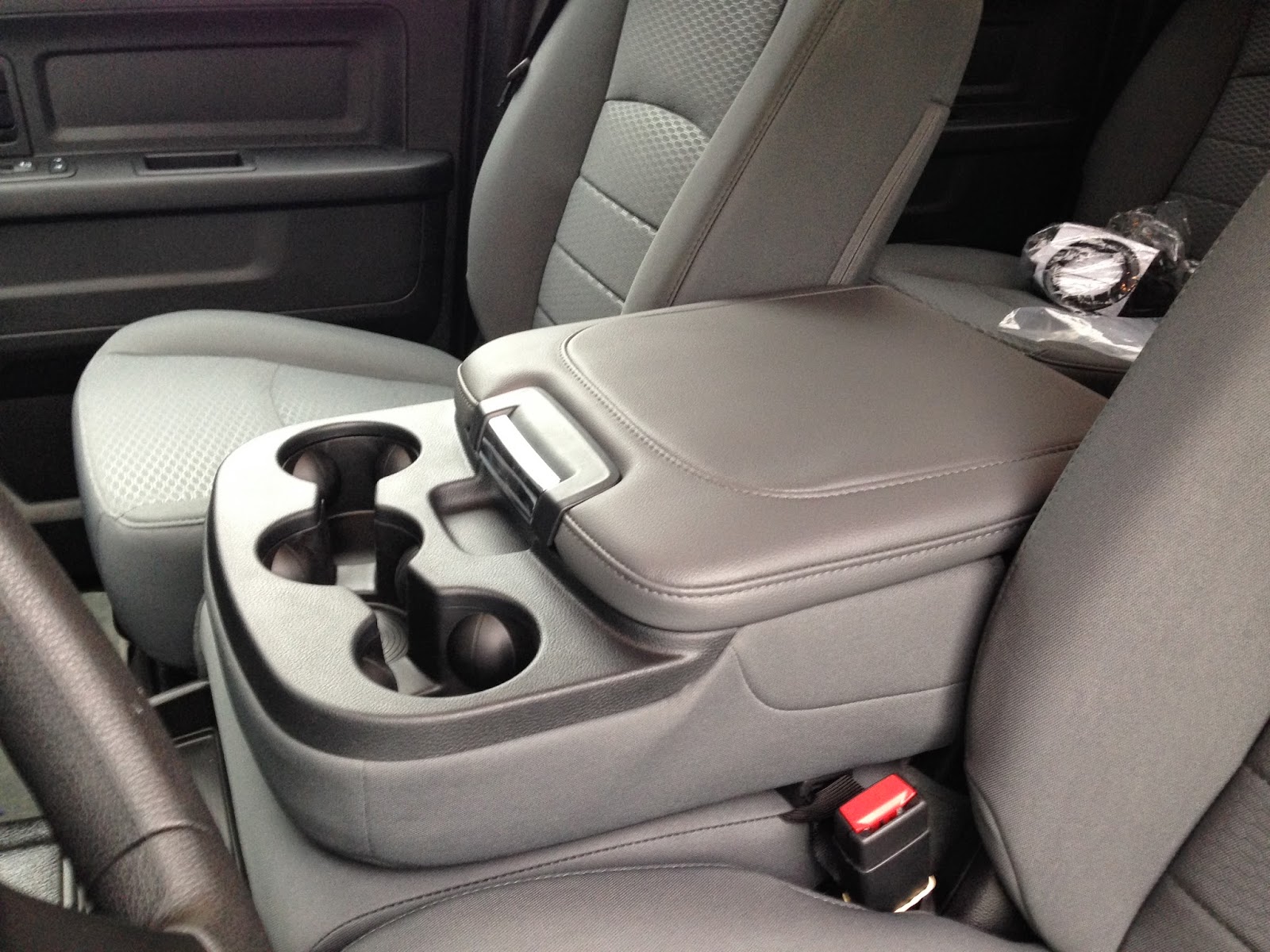 It's got a nice armrest and console in the middle which raises up to a bench seat.  The truck will easily fit six passengers.  Or in our case, two adults and three dogs. 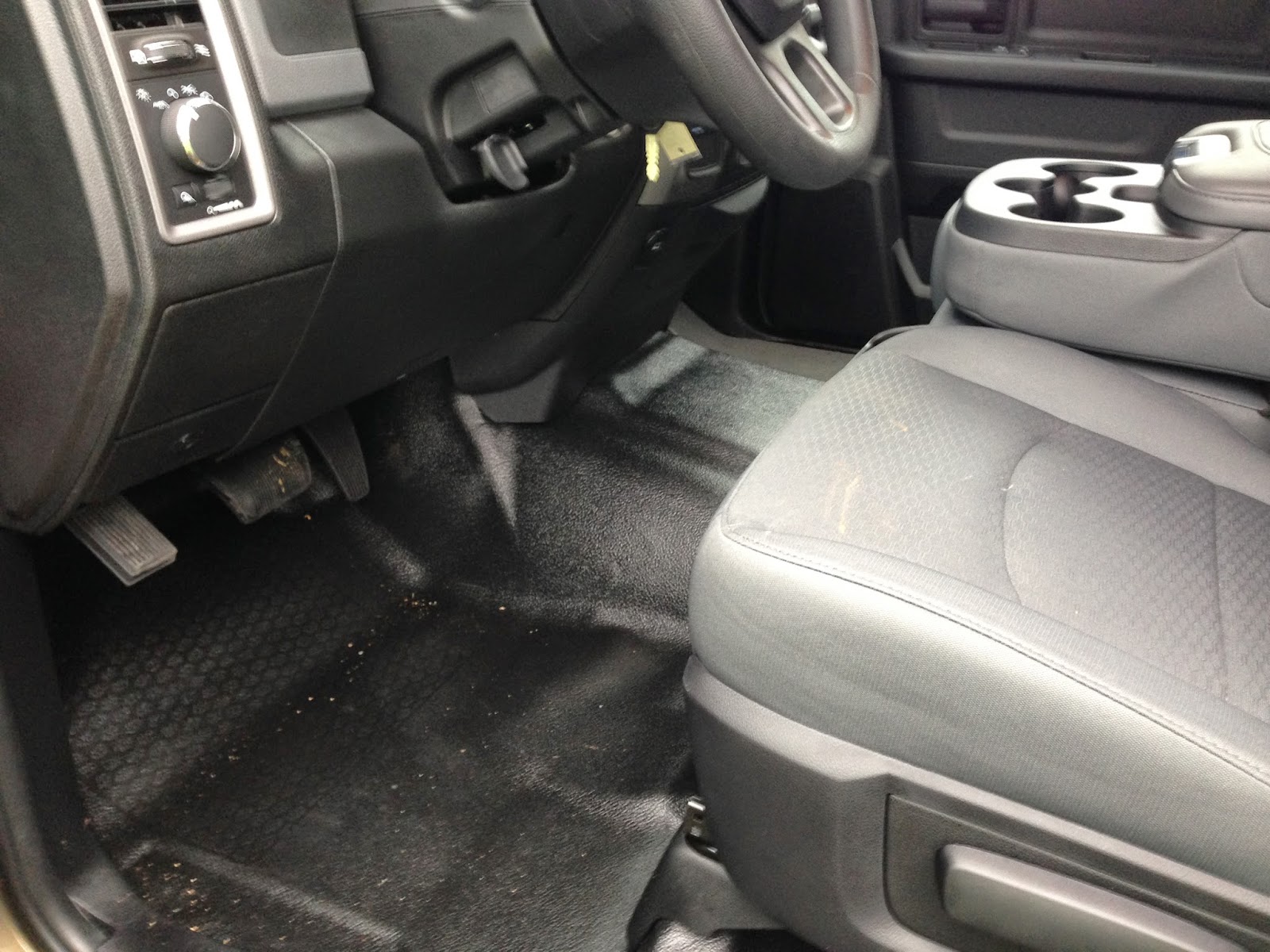 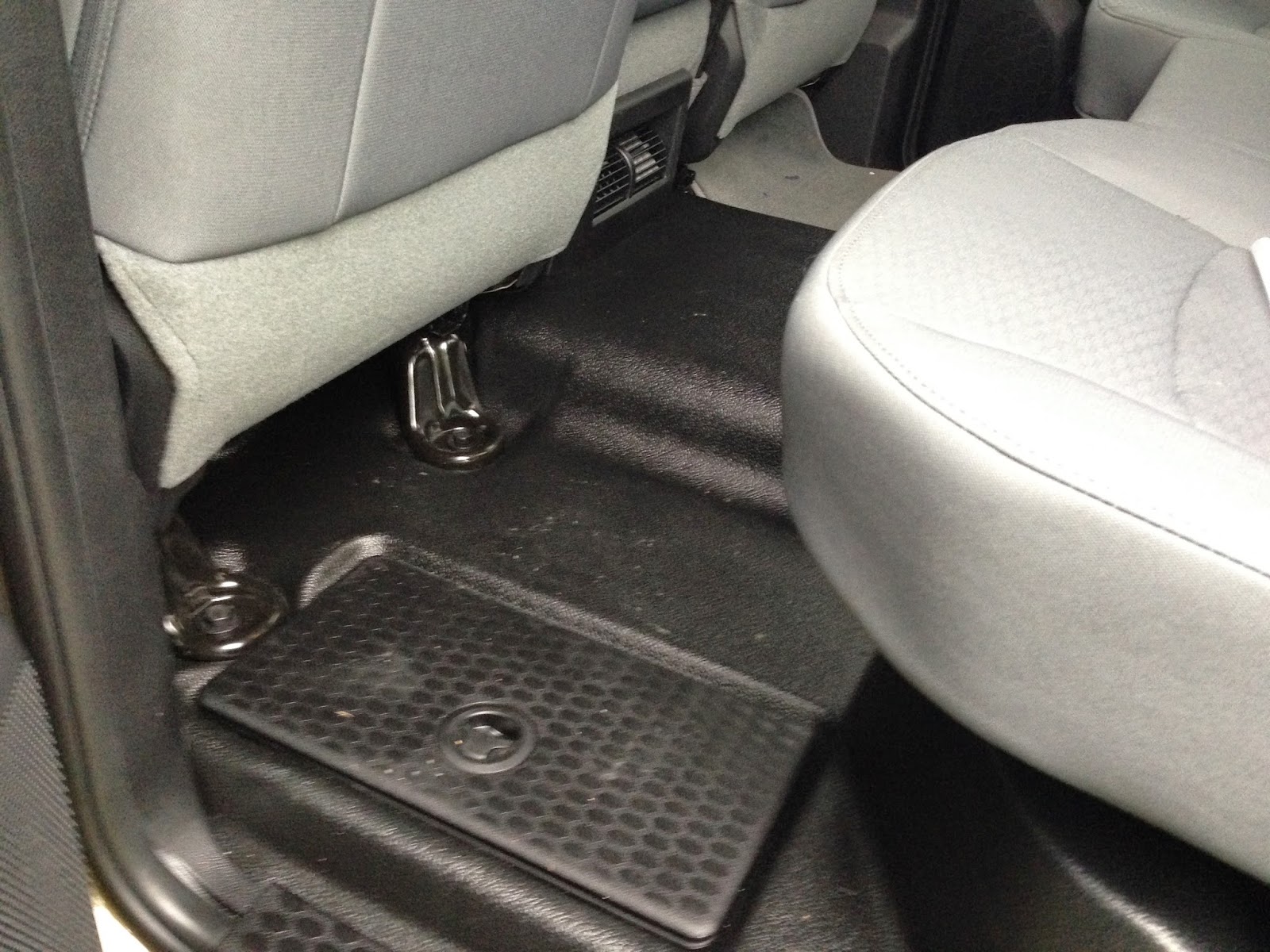 I was happy the truck he found did not have carpet.  I was turned on to this "lack of" feature with the UPS truck.  It is simply a rubber floor which I can sweep out and scrub.  It shines up great with Amour All and I never have to worry about stained or smelly, damp carpet.  This truck is used for hauling horses and dogs.  My boots are never clean and I never have to worry about it.  I do have some floor mats to dress it up a bit that can be easily shaken off or hosed down.  (Admit it, I got you all thinking about that, didn't I?)  In the back of the cab, there are floor boxes that can be used for coolers or just storing items out of sight.


The truck has the power supply to the trailer inside the box of the truck.  Per my request, it has a spray in bed liner.  The new Rams are equipped with a gooseneck and fifth wheel "prep".  The actual gooseneck ball set-up will be installed next week. 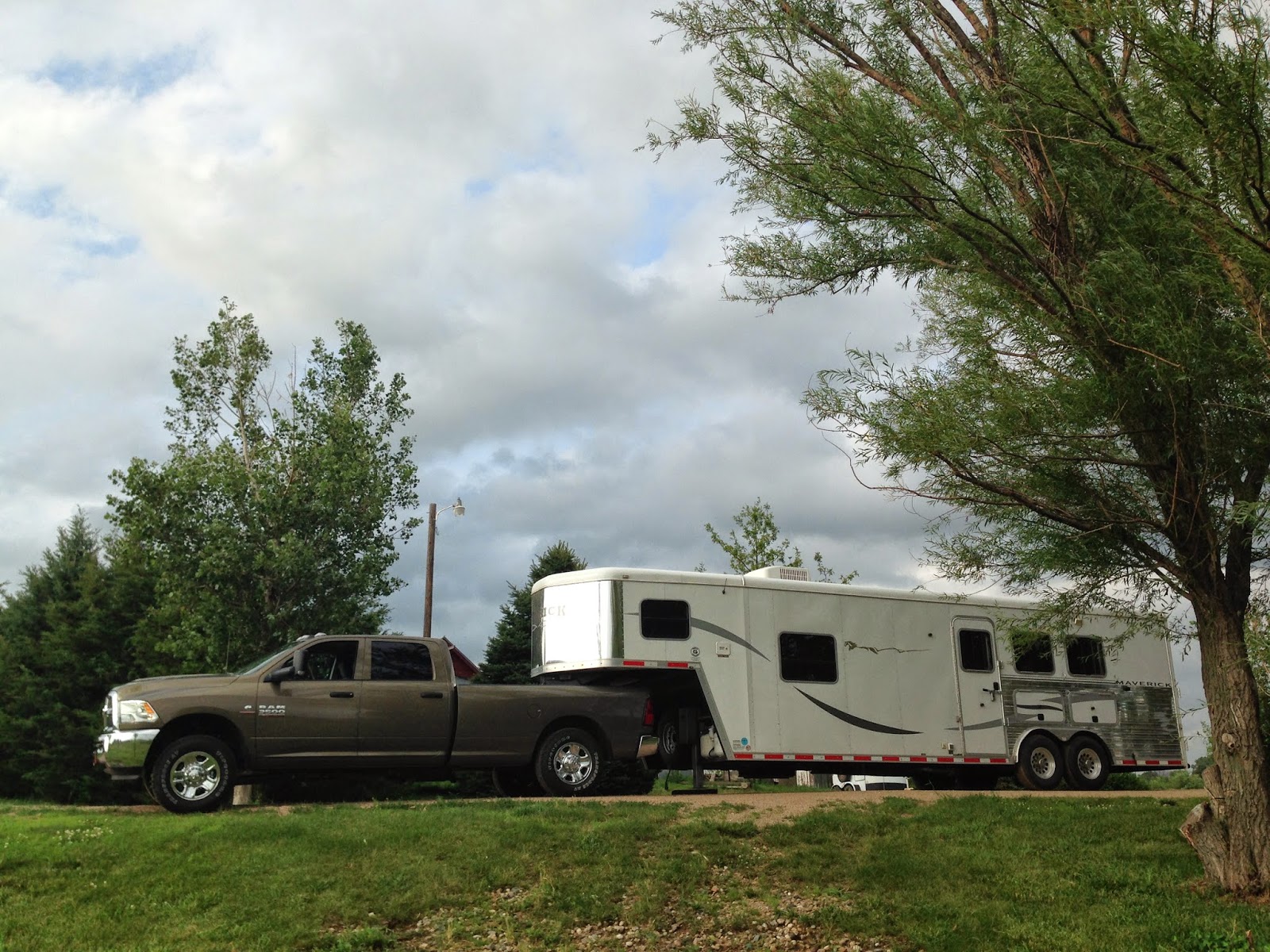 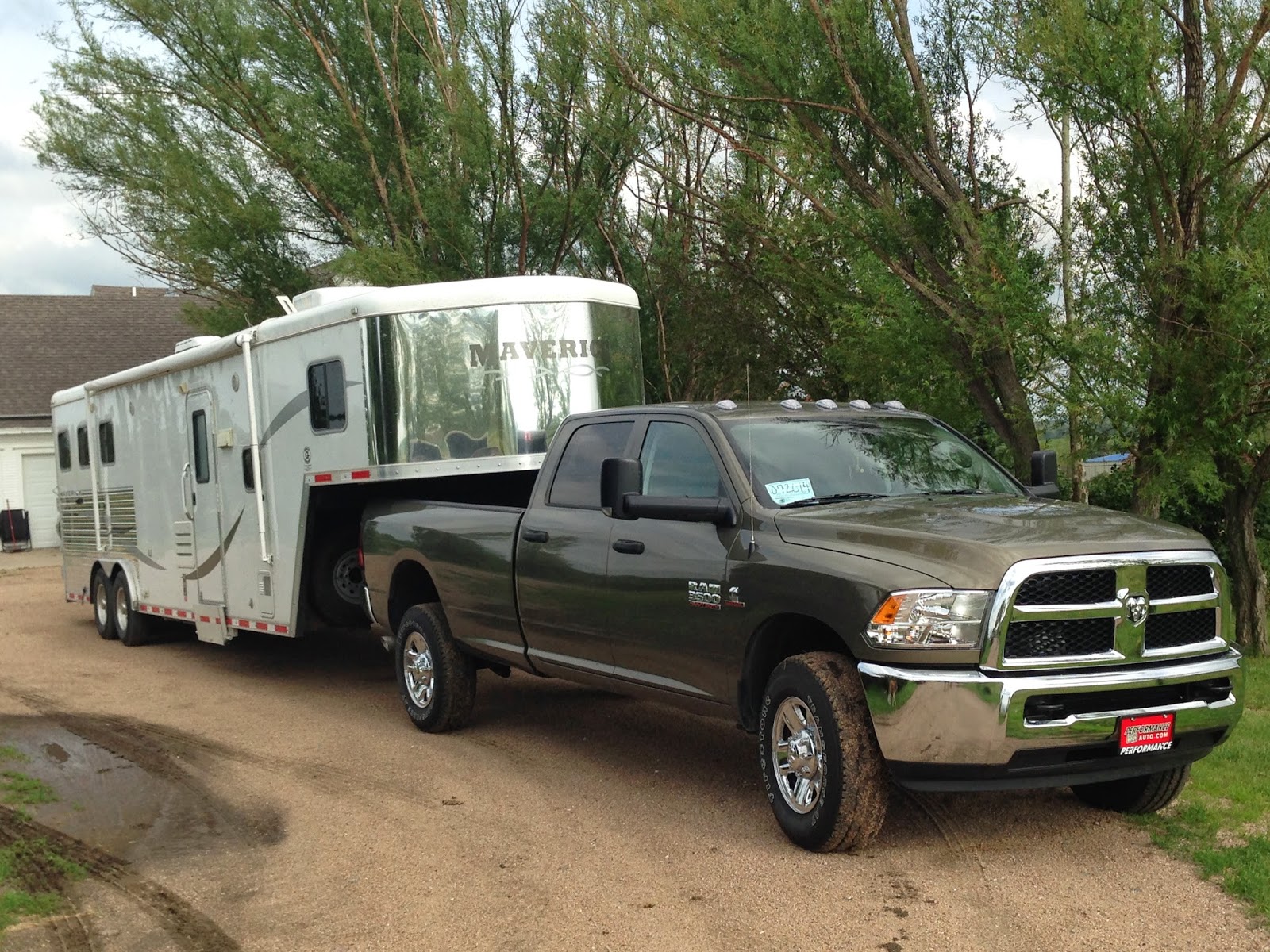 Prairie Pearl is a bit of a chameleon.  In some light it appears gold, in others it looks much darker.  And when driving it, it looks like the hood is black!   I haven't had the opportunity to pull the trailer yet until the ball is installed but did position the trailer under the truck for pictures. 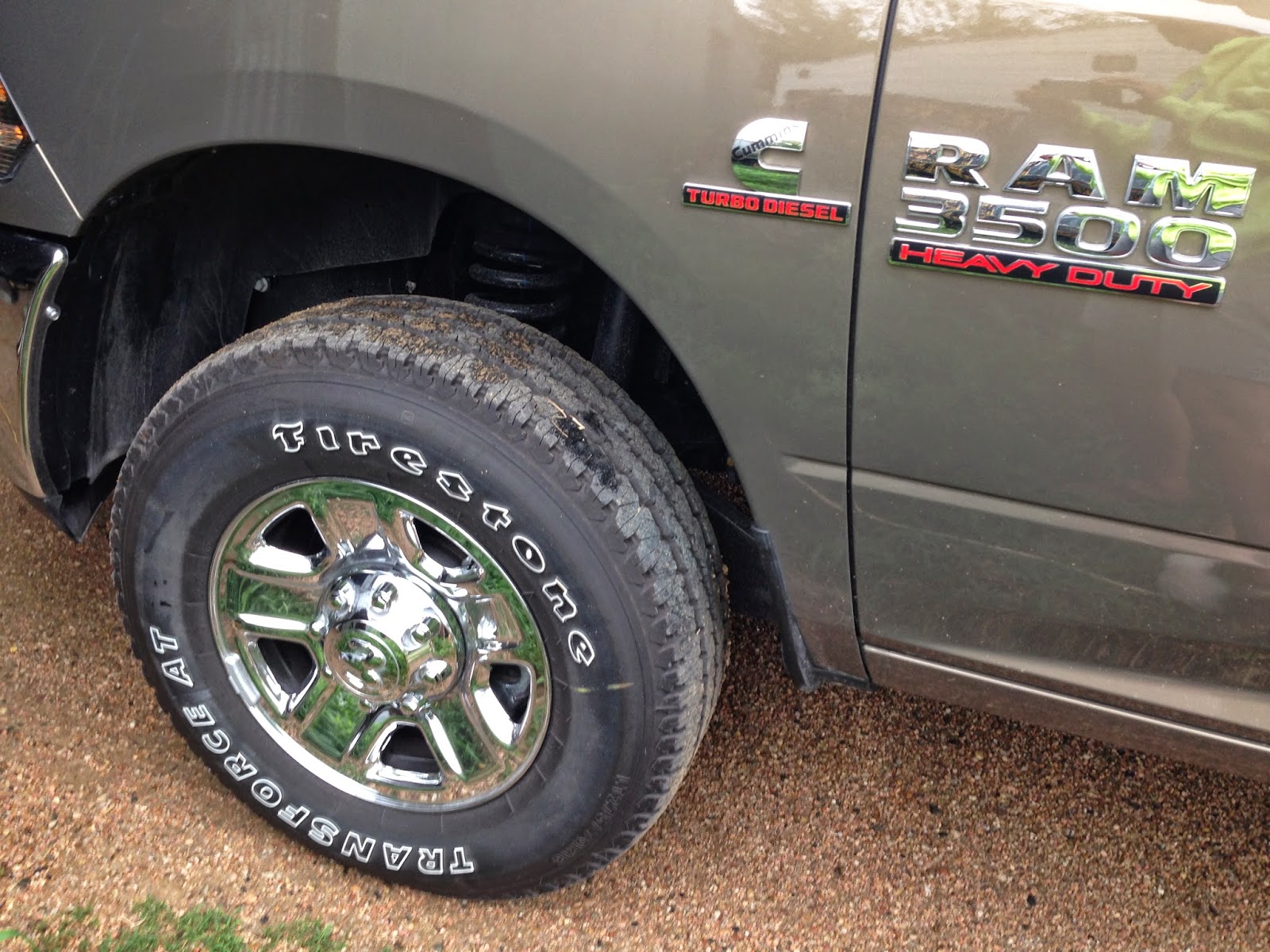 When the hitch gets installed, it will also be equipped with mud flaps.  I am also ordering a running board of some sort because it is very tall to climb into.  The ones at the dealership were about three times the price of what I can get online. 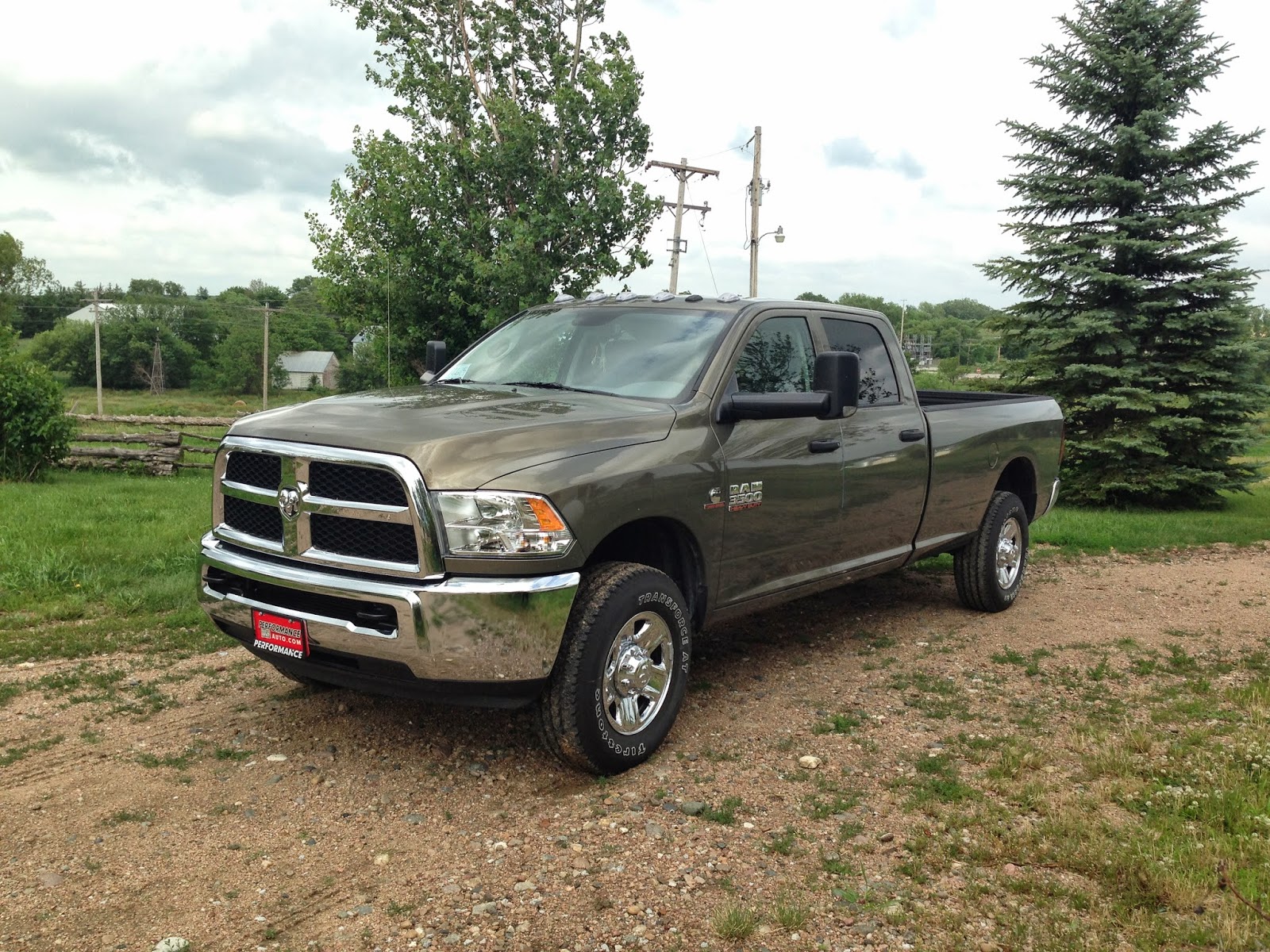 So far, I like everything about it.  From the bigger tires to the hum of a diesel motor.   Case took his girlfriend out to see it tonight, so it must have passed the teenager test, too.  I am so anxious to get moving down the highway with the horses and trailer behind us.


While researching new trucks, I creeped on lots of forums trying to find what folks were getting for MPG with this particular model or the 2013 model, same truck.  No one is talking.  So I will review its performance in the coming months, including MPG.  The good, the bad and the ugly.